‘He just wants to be out there, wants to do better’: Ole Gunnar Solskjaer hails character of Bruno Fernandes after £68m January signing continues fine start to life at Manchester United

Ole Gunnar Solskjaer has paid tribute to the character Bruno Fernandes has brought to Manchester United following his January move from Sporting Lisbon.

Fernandes’ contribution on the pitch has been clear enough with the 25-year-old Portuguese playmaker fast emerging as the new darling of Old Trafford after two man-of-the-match performances against Watford and Club Brugge in the space of five days.

But Solskjaer has been just as impressed by the player’s attitude since arriving in a deal that could cost United as much as £68million. 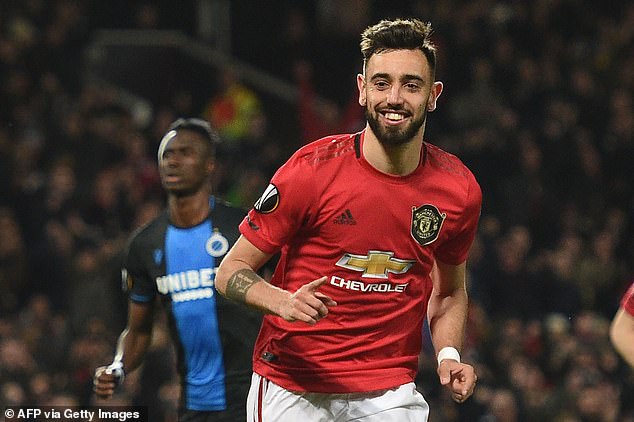 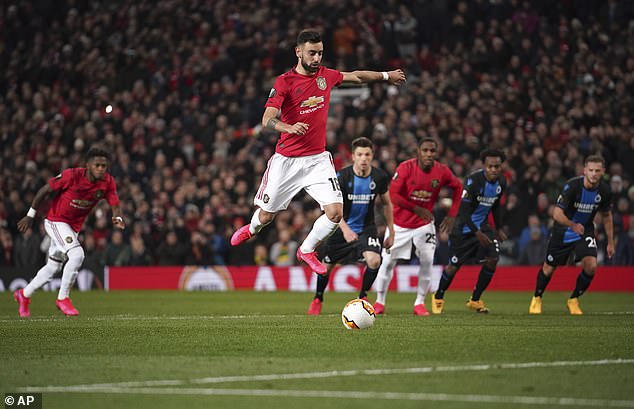 ‘When I took him off (against Brugge) obviously he didn’t want to come off, that’s one thing,’ said Solskjaer on Thursday night.

‘He just loves football. He’s got so much enthusiasm and smile about him. He just wants to be out there, wants to do better.

‘I tried to send him in because it was cold. He said, “no, I want to watch”. He just loves football. He’ll probably know everything about football. He’s one of these “old school” boys and football is everything for him. He’s been a big, big boost for us.’

Victory over Brugge extended United’s unbeaten run to seven games – including five wins – as Solskjaer’s side moved into the last-16 of the Europa League having stepped up their bid for a top-four finish in the Premier League.

The Norwegian is confident that the rebuild he has been entrusted to oversee at Old Trafford is starting to take shape.

‘We knew when we made the decisions we made in the summer it was going to take time,’ added Solskjaer.

‘As I’ve said a few times, Rome wasn’t built in a day. The culture, the attitude, the fitness, the camaraderie, the team spirit and maybe even the understanding between players have improved. 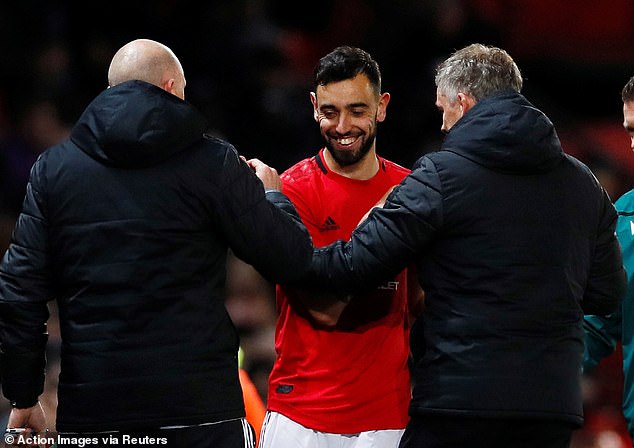 ‘We have missed that box opener that Bruno is proving to be now. There was one or two pieces missing and we still know we miss one or two to be where we want to be, but it’s a work in progress.

‘Kieran (McKenna) and Michael (Carrick) are fantastic on the training ground with the coaching and the boys are willing to learn. Now we’ve got more and more fit players.’

As well as the improved attacking play that has brought eight goals in the last two games, Solskjaer is equally impressed with six clean sheets in seven matches.

‘That’s Man United as the fans want to see,’ he said.

‘Loads of movement, combinations, one or two touch, runs into the box, attempts. We gave them (Brugge) two opportunities early on but I still think we have to be that type of team.

‘Now we’ve had six clean sheets in the last seven, that’s not bad. That’s a foundation to build from like the (Steve) Bruce, (Gary) Pallister and (Peter) Schmeichel.’