Manchester United and Tottenham have registered an interest in Burnley star Nick Pope – but he would cost £50m after Sean Dyche slapped a huge price tag on the goalkeeper.

United have put Pope on their wish list ahead of the summer transfer window, though they will be rivalled by Tottenham.

The Red Devils are prepared to sell David de Gea this summer and have interest from Paris St-Germain.

The Spaniard earns £375,000-a-week at the club but has been in a steady decline for a few years now.

Ole Gunnar Solskjaer is keen to look to the future and understands the 30-year-old will not be around forever. 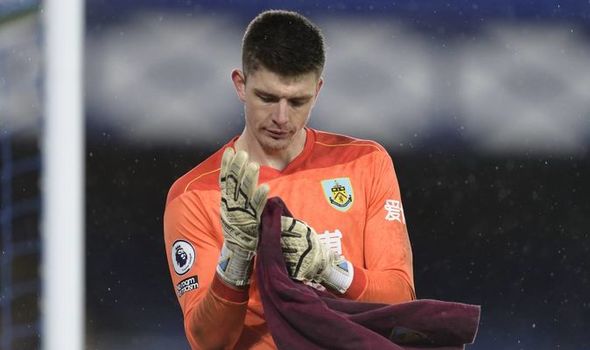 Dean Henderson is being molded for the No. 1 spot at Old Trafford but there are concerns he is not ready to don the shirt just yet.

The Englishman has huge promise and United coaches are keen to see him develop but a stop-gap player has been recommended to keep options available for Solskjaer.

According to the Daily Star, the Red Devils are taking a closer look at Burnley star Pope – who would cost £50m.

However, the ex-Charlton star is also being eyed by Tottenham – who have their own goalkeeper issues.

Hugo Lloris is in the same boat as De Gea – a great Premier League keeper whose best days are becoming more and more behind them.

At 34, the Frenchman is entering the final years of his career and Spurs are looking for an adequate replacement.

Pope has been one of the best performers between the sticks over the years for Burnley which earned him an England call-up.

There are calls for the 28-year-old to be installed as Gareth Southgate’s main man this summer at the European Championships.

Pochettino: I want to manage Tottenham again before I die