Manchester United boss Ole Gunnar Solskjaer has given an early insight into what his team selection could look like against Leeds on Sunday. The Red Devils have all but secured second place in the table with six games of the season remaining, with an outside hope of catching leaders Manchester City.

The main priority now for Solskjaer may well be the Europa League with the first leg of their semi-final against Roma taking place next Thursday.

Solskjaer is yet to win a trophy since taking over at Old Trafford in 2018 having lost in a number of semi-finals during his time in charge.

United will be hoping to reverse that trend next week with Solskjaer undoubtedly keen to have close to a full-strength squad available.

And the United boss was given a boost on Thursday with Eric Bailly continuing his return to fitness having recently recovered from COVID-19.

JUST IN: Fernandes outlines Raphinha chat and sends message ahead of Leeds trip 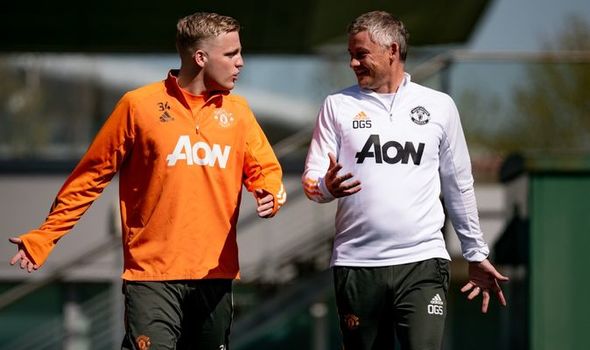 Their training session on Thursday was disrupted earlier in the day when around 20 fans breached security at Carrington to stage a protest against the club’s owners, the Glazer family.

After an intervention from Solskjaer, Nemanja Matic, Michael Carrick and Darren Fletcher, the fans soon left with training taking place later in the day.

And Solskjaer appeared to give a small hint on what his team selection will look like against Leeds this weekend.

Anthony Martial and Phil Jones were missing from training, but two United youngsters joined in the session with the first team.

Hannibal Mejbri and Anthony Elanga took part in the training session, suggesting they may be involved against Marcelo Bielsa’s side.

Solskjaer admitted earlier this month that Mejbri is moving closer to making his debut for United.

“Of course, you drip-feed them in and you don’t expect them to set the world alight,” he said.

“But you want to see them in this environment and he’s looked comfortable and confident. 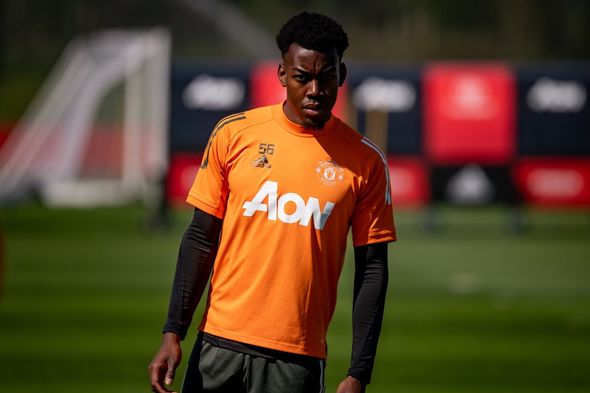 “Hopefully, we can give him that extra motivation and inspiration to show even more of his talent, and why not?”

The 18-year-old has earned rave reviews at youth level and United showed their faith in the youngster when they paid a reported £9m to sign him back in 2019.

Elanga meanwhile has also attracted attention with his blistering displays for United’s Under-23 side.

The versatile attacker boats incredible pace and skill and has scored nine goals in just 18 matches this season.

Both players are yet to make their debut, although Elanga was on the bench for both of United’s Europa League quarter-final ties against Granada.