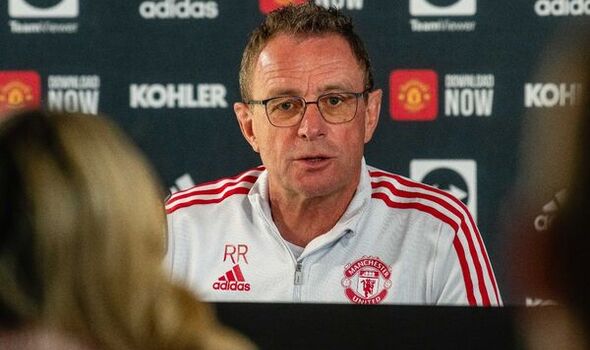 Ralf Rangnick has conceded Manchester United’s underperforming stars may be doing new boss Erik Ten Hag a favour if they miss out on European competition altogether next season. United’s interim boss has challenged his injury-racked squad to dig deep and earn their wages in their remaining four games.

But with a top four spot and Champions League football out of reach, Rangnick admitted missing out on Europe’s second and third tier competitions might not be a total disaster. United look booked for a Europa League place given they are two points clear of seventh placed West Ham and five points clear of Wolves in eighth who have a game in hand.

With Chelsea at Old Trafford on Thursday and United struggling with injuries and having lost three of their last four, a late slip may not be out of the question. Jurgen Klopp inherited a side out of Europe in 2015 after Liverpool had finished eighth the previous year giving him time to build without midweek distractions.

Asked whether Ten Hag could benefit from a similarly slimmed down programme, Rangnick said: “It could be an advantage but that does not mean we will give away any of our remaining four games. For us it’s clear and our obligation. This is our job, my job, the job of the players that we try to get the best possible results and then see at the end of the season in which position we will finish.”

Rangnick is struggling with six first team players out injured for the visit of Chelsea with Edinson Cavani, Paul Pogba, Fred, Luke Shaw, Harry Maguire (knee) and Jadon Sancho (tonsilitis) all out. Aaron Wan-Bissaka is also a doubt for the visit of Thomas Tuchel’s side, meaning Rangnick has just 14 senior outfield players fit.

As a result academy graduates Hannibal Mejbril, Alvaro Fernandez and Ajejandro Garnacho could be elevated to the bench.

Rangnick insisted injury troubles were not an excuse and called on his remaining troops to end the season on a high. “If results are not going well and we lost three of the last four games, the morale, energy in the locker room will not be as good as it would be, so still we have to perform.

“This is what we’re getting paid for, it’s important for players, knowing new manager, to show we are able to beat a team like Chelsea. This is our job and this is what everyone has to do.”

Fan numbers to be restricted for A-League semi-final