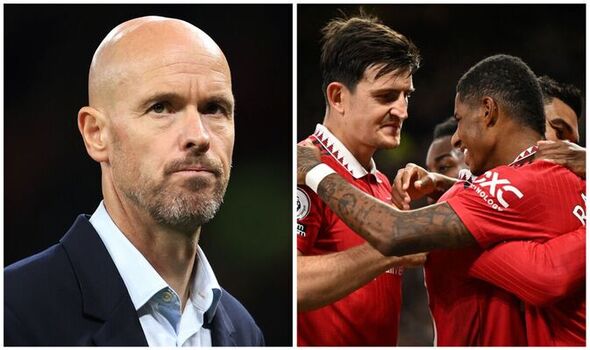 Erik ten Hag has predicted that Manchester United can challenge for the Premier League by 2024, but the head coach warned that the club must continue to make significant moves in the transfer market to keep on track. The Dutchman is hoping his side will be competing for silverware in the league in two years’ time once they have adapted to his methods and revamped their playing squad.

The former Ajax has given the fanbase reasons to feel optimistic about the future after an assured start to his career at Old Trafford, with United in contention for a top-four finish after missing out on Champions League qualification last season.

The Red Devils have also lost only one of their last 10 matches in all competitions with favourable results against Arsenal, Chelsea and Liverpool.

High-profile signings such as Antony and Casemiro have injected positivity into the team, while Ten Hag’s capture of Lisandro Martinez has proved to be a masterstroke after the Argentine’s seamless transition into life in the Premier League.

But the 52-year-old knows that his side are still a distance away from reaching the level that is required to win trophies and titles, and is under no illusions the club must operate shrewdly in the transfer market as well as other areas, with targets such as Frenkie de Jong slipping away from them last summer.

“It has to be a proactive way, proactive football and that we are dominating and dictating games against all our competitors, so at the highest level,” he told reporters ahead of their Carabao Cup clash with Aston Villa. “That is a really good challenge, so when you get that style into the squad, also we’ll see that players will develop to higher levels.

Ten Hag will be without Jadon Sancho, Raphael Varane and Antony for the visit of Villa at Old Trafford as he prepares to shuffle the pack with several changes. But the United boss insists he will treat the competition with respect.

“All the games that we play, we have only one aim. We have to win,” he added. “So that is the most important thing. We have to win, so we put the best players on the pitch we have.

“For every game, we make a proper plan for the line-up and this is the same. Of course, we have a lot of games to cover and this is a different competition.

“We plan some changes, but want to play a strong team. We have only one aim: we have to win to go to the next round.”