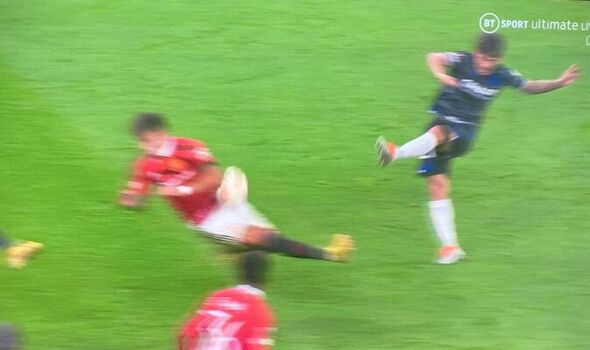 Manchester United fans were livid with referee Marco Di Bello and the VAR team at Old Trafford on Thursday evening after Lisandro Martinez gave away a penalty during his side’s Europa League clash with Real Sociedad. The defender was deemed to have handled the ball following a contentious VAR check, despite the fact Real midfielder David Silva had fired the ball straight into him from point blank range inside the penalty area.

United played host to Real Sociedad off the back of four Premier League victories. The Red Devils, who lost their opening two matches of the season against Brighton and Brentford, had inflicted defeats on Liverpool, Southampton, Leicester and Arsenal ahead of their return to the Europa League.

The match took place just hours after the announcement of Queen Elizabeth II’s death and proved to be a drab affair for much of the encounter, with Cristiano Ronaldo having a first half goal ruled out for offside.

The Red Devils struggled to break their Spanish opponents down during the contest as they looked lacklustre in front of goal. And they fell behind just before the hour mark as Brais Mendez struck from the penalty spot.

There was little Martinez could do to prevent the spot kick as he dived in to block Silva’s shot. And the strike deflected off the Argentina centre-back’s thigh before hitting him on the arm. And after consultation, Di Bello pointed to the spot.

The penalty ultimately proved to be the difference between the sides as Sociedad claimed all three points. And United fans were quick to show their disgust with the referee’s decision. “Absolute travesty that was,” wrote @NickDrakon on Twitter. “Didn’t look like a penalty for any angle. Ridiculous.” And @Alirgh33 tweeted: “Can’t believe the penalty that referee gave! Shocking! VAR is a scam!”

Meanwhile, @NepentheZ wrote: “I’ve only just seen the penalty against Man Utd. What an utter disgrace of a decision. And @UnitedIsRevived added: “We’re getting robbed lol, if you think that’s a penalty then you need glasses.”