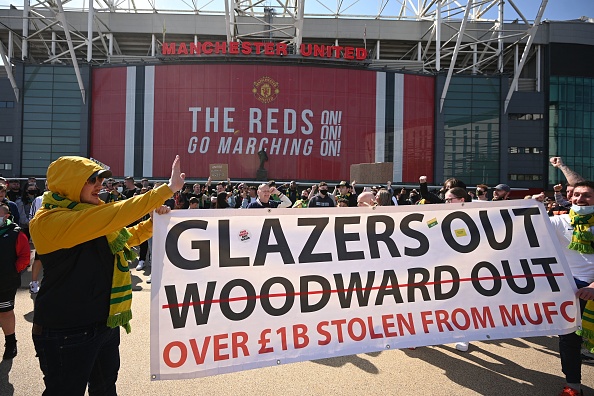 Angry Manchester United fans have taken to Old Trafford to protest against the club’s owners, the Glazers, in the aftermath of their European Super League plot.

United were one of 12 clubs to have announced their intentions to take part in a breakaway league which aimed to rival the UEFA Champions League, sparking mass backlash from supporters, pundits and politicians alike.

The response was so overwhelmingly negative that the ‘big six’ Premier League clubs involved – United, Manchester City, Arsenal, Liverpool, Tottenham and Chelsea – withdrew their support for the controversial plans just 48 hours after the initial announcement.

Protests have been staged all week by Liverpool, Tottenham and Arsenal supporters before their Premier League matches this week, while some United fans blocked the entrance to the club’s Carrington training base on Thursday.

To further vent their discontent, more United fans have arrived at Old Trafford on Saturday, with banners held aloft and flares lit.

‘Glazers Out’, ‘Enough is Enough’ and ‘United Against Greed’ were some of the sentiments voiced.

On Wednesday, co-owner Joel Glazer wrote an open letter to fans apologising for the damage caused by United’s involvement in the proposed breakaway competition, in which he vowed that bridges will be built with supporters.

Despite the backlash from fans, according to reports, the Glazers have no intention of listening to offers for the club as they remain committed to staying at Old Trafford for the long-term.

Ed Woodward, though, will step down from his role as Manchester United’s executive vice-chairman at the end of the year.

But United legend Gary Neville, who was vocal in his opposition of the breakaway league proposal, has insisted that Woodward is just the ‘trunk of the tree’ and wants the Glazers to sell up immediately.

‘Ed Woodward is the trunk of the tree, we now need to go for the roots,’ Neville said on Tuesday night.

‘While they were sat at the club never making a statement, never showing their hands, never doing media conferences, yes they were taking money out of the club, yes they’ve leveraged against the club, there’s nothing we can do about that once the club became a PLC.

‘They attacked every single football fan in this country with what they did.

‘The Glazers have no place in Manchester anymore.’