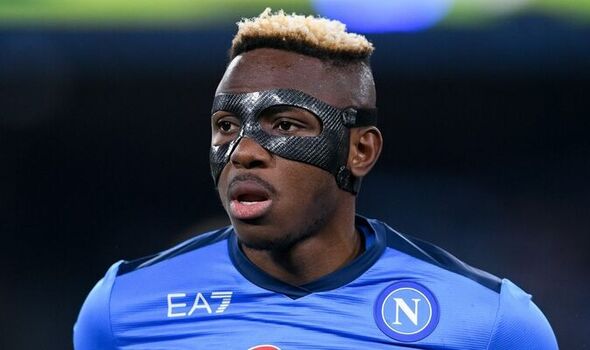 Manchester United have tabled an ‘unmissable’ offer worth over €100million (£84m) for Napoli striker Victor Osimhen, according to reports. The Nigerian frontman has built himself a reputation as one of the most devastating finishers on the planet in recent years following his emergence onto the scene at Lille in the 2019/20 season.

His rich goalscoring form in France prompted Napoli to splash the cash on his services and now the Italian giants could be set for a record pay-day.

That’s because a number of Premier League clubs are now circling ahead of the summer transfer window, when Osimhen could move on.

Italian newspaper La Repubblica claim United are now at the front of the queue having indicating they’re ready to pay £84m for the 23-year-old.

Arsenal and Newcastle are also interested in a summer deal but neither club is yet to match or better United’s proposal.

Osimhen has 16 goals in 28 matches this season having missed a significant chunk of the campaign due to a cheekbone fracture sustained in November’s 3-2 defeat at Inter Milan.

For the latest news and breaking news visit:/sport