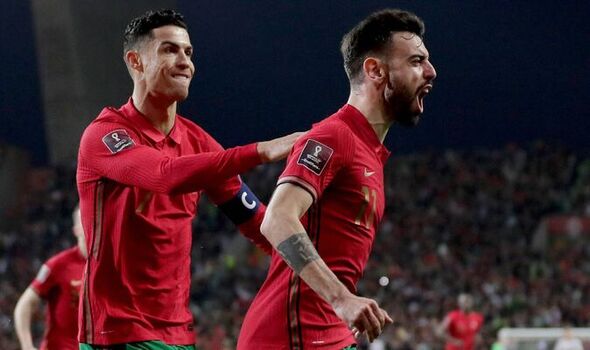 Bruno Fernandes was the hero on Tuesday night in Porto as Portugal booked their place at the 2022 World Cup. Fernandes scored both goals for his country in their 2-0 qualifying play-off final win over North Macedonia – and, like he so often does at Manchester United, Cristiano Ronaldo played a big part in his success.

Although Ronaldo did not add to his staggering record of 115 international goals, he was still influential in booking Portugal’s place at what will be his fifth World Cup. It was Ronaldo who kept his cool and played a neat pass through the legs of an onrushing defender to set up Fernandes’ first on the break after a North Macedonia mistake.

Fernandes added a second goal with a nicely-taken finish from Diogo Jota’s cross, yet it was Ronaldo who provided Fernandes’ inspiration to become the player he is today. Ronaldo made his Portugal debut way back in 2003 and now plays alongside a whole generation of players who harbour fond memories of watching him perform for their country.

Fernandes is one of those. Just like millions of Portuguese people – and hundreds of professional footballers – the 27-year-old midfielder has been inspired by Ronaldo.

“Growing up, everyone knows Cristiano was my favourite player,” Fernandes told the Manchester United club website last year. “I think it was a little bit of everything. When Cristiano began to take his first steps in the national team, it was in the Euros in our home country [Euro 2004], so I was nine years old. That year stays with everyone because we lost the final in Portugal, we saw him crying after the final, he was a young boy who was starting to shine and from there I started to watch him.

“It wasn’t because he plays in my position because that wasn’t the case, but it was the way he worked every day, the mentality he had, the capacity he had to give 100 per cent in every game at a high level, for me it was like a motivation, like you always have to do better. He was scoring goals every game, but game after game he was still trying to improve, get better.”

Chelsea were ‘best-placed’ to sign Tchouameni before sanctions hit

The respect is definitely mutual. According to Sky Sports, Ronaldo was asked his opinion of Fernandes by Ole Gunnar Solskjaer before United pulled the trigger on a transfer from Sporting Lisbon worth an initial £47m in January 2020. United ended up with a player absolutely brimming with determination – and that mentality has undoubtedly been influenced by Ronaldo.

“Coming back with the mentality that is, ‘okay I didn’t play well in that last game and I really need to do well in this one’. The mentality to do better day after day is really important for me. I’m improving a lot because of this, and that was my biggest motivation.”