Manchester United were 1-0 up against Watford at half-time on Sunday afternoon, after a first-half penalty from Bruno Fernandes. But, the midfielder’s choice of penalty style enraged Chelsea fans, who accused him of copying Jorginho.

Fernandes won the penalty, after being fouled by goalkeeper Ben Foster.

Foster came charging off his line to try and beat Fernandes to a lose ball.

But, the January signing got there first, and went down after being clipped by the goalkeeper.

His subsequent penalty gave the Red Devils the lead at Old Trafford.

JUST IN: Where Arsenal stand on Saka new contract as Man Utd and Liverpool lurk 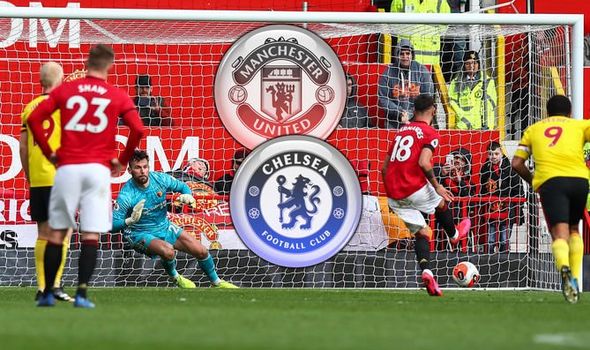 Fernandes’ penalty was similar to the style adopted by Chelsea star Jorginho.

He ran up to the ball, skipped, and then struck the ball.

The quick skip meant that the goalkeeper was forced into committing, leaving Fernandes to slide the ball into the opposite corner.

Chelsea supporters weren’t happy that Fernandes decided to use Jorginho’s trick, and joked that he has pictures of the Italian on his bedroom wall.

Another supporter added: “Obviously Bruno is a fan of Jorginho…”

“Bruno is a btec jorginho,” added one Chelsea fan. 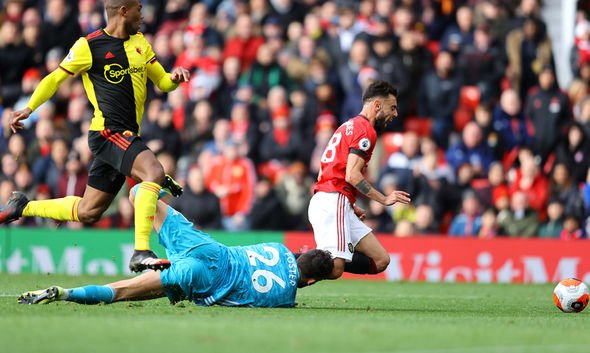 “Bruno Fernandes has pictures of Jorginho in his bedroom,” joked one Blues fan.

Another said: “Jorginho: ‘Bruno Fernandes how dare you?’”

United went into the match knowing that a win would take them up to fifth in the table.

They would also be just four points behind Chelsea, who are currently occupying fourth spot.

Meanwhile, Watford have fallen back into the relegation places in recent weeks.

The Hornets had been given a new lease of life under Nigel Pearson, but they now haven’t won a match in four games.

Wales squad: Who would be in your starting XI for Euro 2020?