Manchester United remain interested in Kalidou Koulibaly and look to sign the Napoli defender should they fail to secure the services of Raphael Varane.

The Real Madrid defender continues to be linked with a move to Old Trafford, though no clear progression appears to have been made between both parties regarding a transfer.

Should a deal for Varane fail to materialise, Koulibaly has emerged as a potential back-up option for the Red Devils to consider.

The Senegalese defender has been at Napoli since 2014 and has continuously been linked with a move away from Serie A, but could that finally happen this summer?

Italian outlet Gazetta dello Sport have claimed that both United and Liverpool are ‘so fond’ of the towering defender, who is out of contract in 2023.

JUST IN: Everything that has changed since Man Utd last went for Jadon Sancho 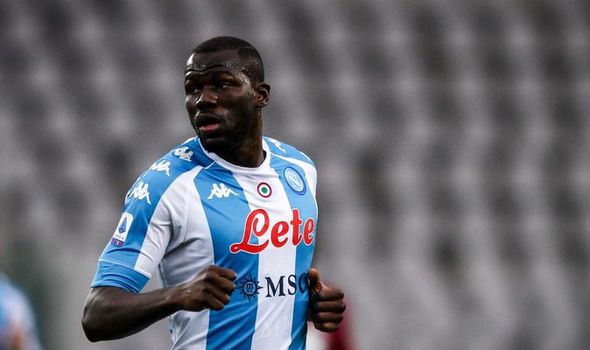 Napoli’s valuation that stood in excess of £100million deterred a number of clubs from launching a formal bid for Koulibaly, though it’s believed that the club are now demanding a fee in the region of €50-60m.

Another factor that could lead to the 29-year-old leaving this summer is the likely departure of manager Gennaro Gattuso, with Napoli seeking a new direction as a club.

As the club searches for a new identity, this could lead to the selling of star players such as Koulibaly.

The experienced defender signed a new five-year deal at the Serie A club in 2018 but has come close to exiting Napoli on a couple of occasions.

Chelsea and Manchester City are two examples of teams to have seen bids rejected and United also failed in their pursuit of the player in 2019.

Koulibaly’s long-term future remains unclear, which the defender admitted himself during an interview with Gazetta dello Sport last year.

“In football, you never know what happens. I never spoke to Napoli about leaving. If we have to find a solution, we will find it, but I have never talked about the transfer market,” he said.

“I also read in the newspapers about my future. But I only want to think about playing, I am 100 per cent [committed to] Napoli and it bothers me to be linked, every day, to this or that European club.

“We will see what the president (Aurelio De Laurentiis) will decide and if he proposes to extend my contract, that would allow me to end my career here.

At the moment, I still have a three-year contract and I am not thinking of anything else but Napoli.”