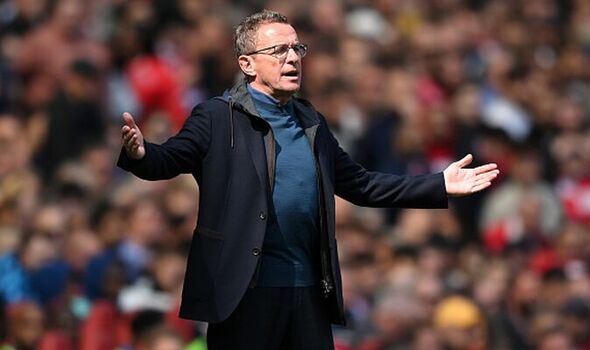 Manchester United have been told they should abandon their long-term plans involving Ralf Rangnick. The German is set to move into a boardroom role this summer, with Erik ten Hag confirmed to be the club’s new manager.

United should forget all about keeping hold of Ralf Rangnick past the end of the season, despite plans for him to maintain an important role behind the scenes. That is according to former Red Devils defender Mikael Silvestre, who insists the club are better off without him.

With Ajax manager Ten Hag set to be the new man in the Old Trafford dugout, Rangnick is set to help with off-field matters from next season, including this summer’s transfer business.

However, Silvestre feels Ten Hag is better off having complete say with who he brings in for the new campaign, instead of having Rangnick involved in the process. Instead the Frenchman thinks the two should sit down and have a long chat about what is going on at the club and how they can move forward.

Speaking to Genting Casino, Silvestre said: “Given the model of the club with the people in charge and with the new manager coming in and the power he will be given, to be honest I don’t see how it can work with Ralf staying at the club beyond the end of the season.

“The best thing to happen would be an extremely confidential meeting between Erik and Ralf, which isn’t made public, where he delivers his honest assessment of the club. That would be beneficial for him and he could use Ralf’s assessment and his experience as interim manager to have a better understanding of what has been happening at United.

“I think that will be Ralf’s best contribution. With what has been reported about Erik’s involvement in recruiting players, we would expect him to be the final decision maker when signing players.”

Silvestre also thinks Ten Hag will find life easier without Rangnick at the club, in order to give him an entirely clean slate to work with.

“I think that is what should happen,” he added when asked if Rangnick should leave. “United already have Richard Arnold (Executive Chairman), John Murtough (Sporting Director) and Darren Fletcher (Technical Director). They have people in place, you don’t need to add another layer which will add confusion.

“As I said, I think they should have an honest, confidential conversation, but only between Ralf and Erik.”