Time is ticking along towards Thursday night’s transfer deadline and Manchester United still have plenty of business to conclude. Thankfully for Erik ten Hag and transfer chief John Murtough, a major breakthrough in negotiations for Antony could pave the way for other deals to kick up a notch.

After months of pushing from both the player and the club, it looks like United may finally get their hands on Antony with Ajax admitting defeat following a mammoth bid. The Brazilian had been left out of the past two matchday squads as he tried to force through a move.

PSV Eindhoven star Cody Gakpo remains an attacking target and could follow Antony to the Premier League in a move that would be even more likely if Cristiano Ronaldo jumps ship. The Portuguese is once again being shopped around Europe by super-agent Jorge Mendes and it remains to be seen whether anyone will bite before September 1. 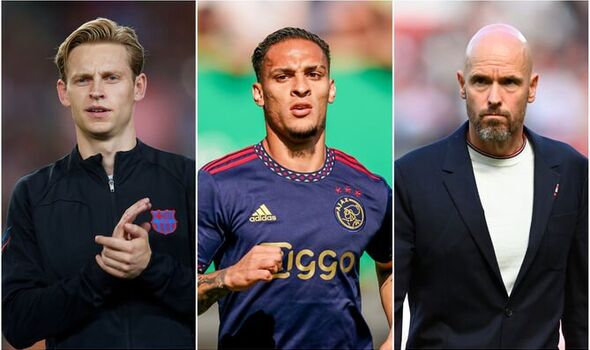 Cristiano Ronaldo’s agent, Jorge Mendes, has gone back to Chelsea to see if they are keen to revive their interest in the wantaway Man Utd forward, according to The Independent.

Blues co-owner Todd Boehly is thought to be keen on signing the Portuguese but Thomas Tuchel has reservations and would prefer to sign Pierre-Emerick Aubameyang instead.

Ronaldo reportedly asked to leave Old Trafford last month but he has since been unable to find a new club with the likes of Bayern Munich and Atletico Madrid distancing themselves from a potential swoop.

While Man Utd’s swoop for Antony now appears to be a formality, Ten Hag is also thought to be eyeing up another attacking recruit.

Pierre-Emerick Aubameyang and Cody Gakpo have both been touted as options. Sky Sports claim that United are ‘keeping an eye’ on the former, while a double Eredivisie deal for the latter has been described as ‘not impossible’.

PSV Eindhoven, managed by United legend Ruud van Nistelrooy, are believed to value Gakpo in the region of £34million.

Antony could undergo his Man Utd medical today after the Red Devils and Ajax agreed on a total package worth £85million.

Sky Sports claim that the Brazilian will arrive in England for tests on Tuesday at the latest with United in a rush to move onto other transfer interests.

Personal terms are expected to be concluded rapidly with Antony keen to reunite with his former Ajax boss, Erik ten Hag.

The 22-year-old was left out of Ajax’s matchday squad on Sunday for the second game running.

More on this one throughout the day..