After a day of chaos around Old Trafford, and so many questions about what next, there is a simple driving truth: You can’t try and disrupt the entire fabric of the game and not expect disruption in return.

Many might criticise the nature of the protest at Manchester United. Graeme Souness certainly had a go. Many might find some of the elements distasteful or ugly, such as bottles and flares being thrown. Violence of course should not be tolerated.

Most of this, however, was justifiable civil protest. And it is impossible to find fault with the legitimacy of these demonstrations, or their effect.

These were almost unprecedented scenes. There has never been a game – let alone a game of this scale – postponed due to fan protest in the Premier League era.

You might say it’s the second most effective moment of supporter activism in modern English football history, after the demise of The Super League. Really, of course, it is just a continuation of that same protest. It is why that plan may genuinely prove a landmark moment in the game, in a way that was totally unexpected, and that represents a classic case of unintended consequences.

Through the Super League plan, the Glazers – and many other club hierarchies – tried to take their ownership to its greatest extreme: just doing what they wanted with a social institution, in pursuit of nothing more than greater financial return. It was an attempt to assert ultimate control.

Instead, the entire situation is now out of control, and there are – for the first time – genuine questions over whether the ownership is worth it. Thousands of United fans gathered outside Old Trafford, with hundreds taking to the pitch

They have at the very least forced the supporters to escalate their protests. That is why this really shouldn’t be underestimated. The game should take note.

These were not the relatively passive green-and-gold protests of 2009/10, which dissipated to little effect and were also very easy for the Glazers to withstand. This had tangible effect. It caused a Premier League game – the great product the Glazers are trying to sell around the world – to be postponed.

Hundreds of millions fans might be disappointed with their Sundays ruined. That’s the entire point. The game was well chosen.

Anyone quibbling about the inconvenience of that, or some of the genuine causes of complaint with this protest, should also stand back and look at the bigger picture.

Minor property damage simply doesn’t compare to the damage done to Manchester United as an institution by this ownership. That really should not be forgotten.

The fact that the Glazer takeover was even allowed remains one of the greatest tragedies in English football history, and a key moment in the sport’s disgraceful embrace of hyper-capitalism that led to The Super League and a multitude of other problems.

It is objectionable that a social institution like United did not have any kind of state protection from a leveraged buy-out. It is lamentable – and such a waste – that the Glazers have been able to run the club in the way they have, where they have only taken money out.

Again, the bigger picture shouldn’t be missed here. A football club should only exist for two interconnected reasons: to play football, and to try to win – as a representation and expression of their local community. Anything else should be second to that. 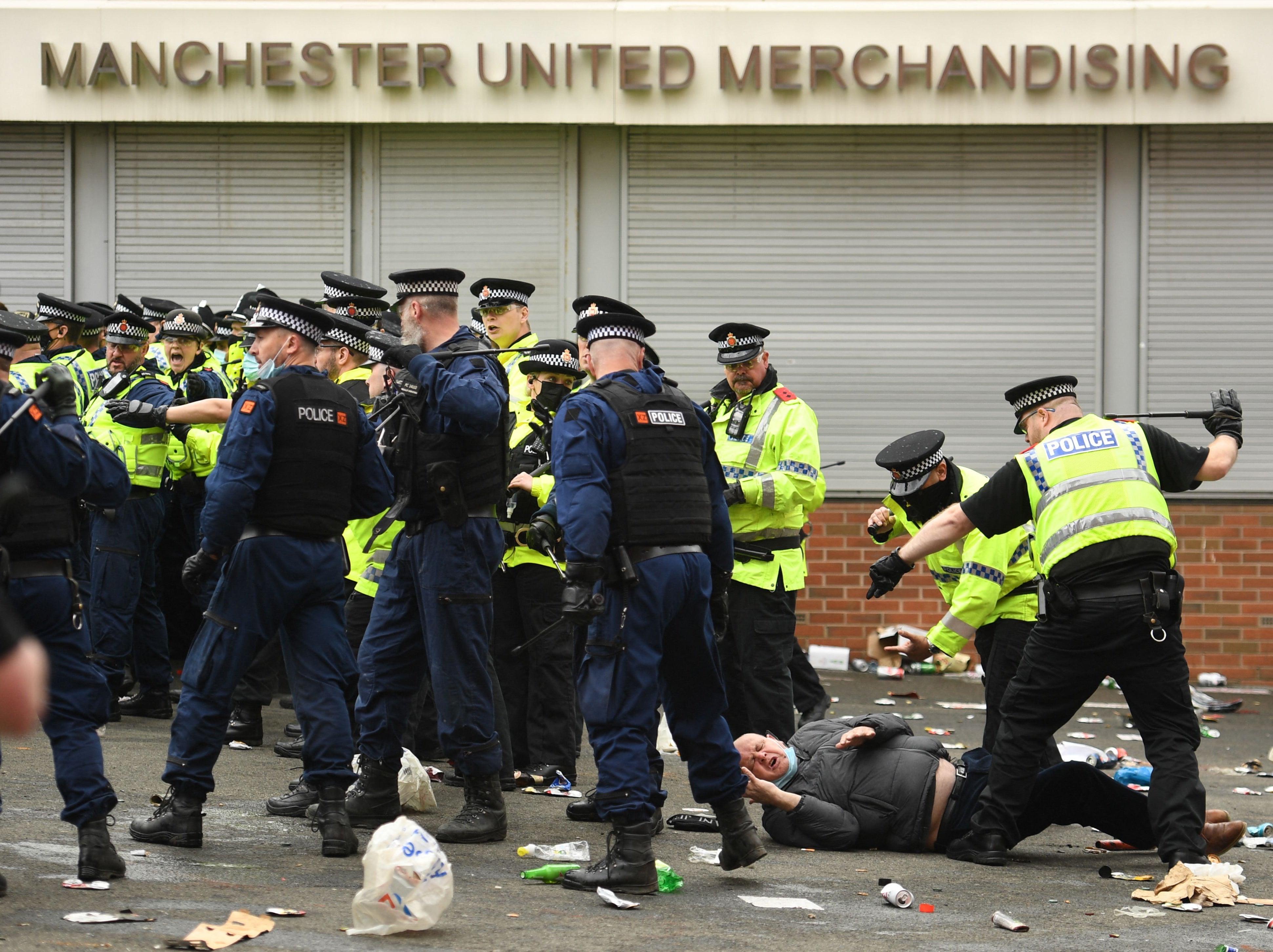 Police attempt to manage the situation outside Old Trafford

The Glazers, and so many other owners, just see them as capital – be that financial, political, or social.

Many of these objectives, as we see with the farcical Super League crisis, are contradictory to what sport is really supposed to be about.

United fans, like many others, have stood powerless in the face of this for far too long.

Well, this was an expression of their power – and it had tangible effect.

It was of course sparked by that Super League crisis, and remains important to that ongoing story. That whole situation ended up as an invigorating illustration of supporter action, but the threat was always that such emotional momentum would dissipate as the games got going again. That has been the recent history of football, after all. The sport’s news cycle moves too fast. It is why these owners generally got their way.

It is why this may be another landmark. It might be crucial to perpetuating the momentum of the supporter response to The Super League, to continuing to show the supporters do have power.

The Glazers and the other owners might well have just taken things too far. This is the new world they may have created. 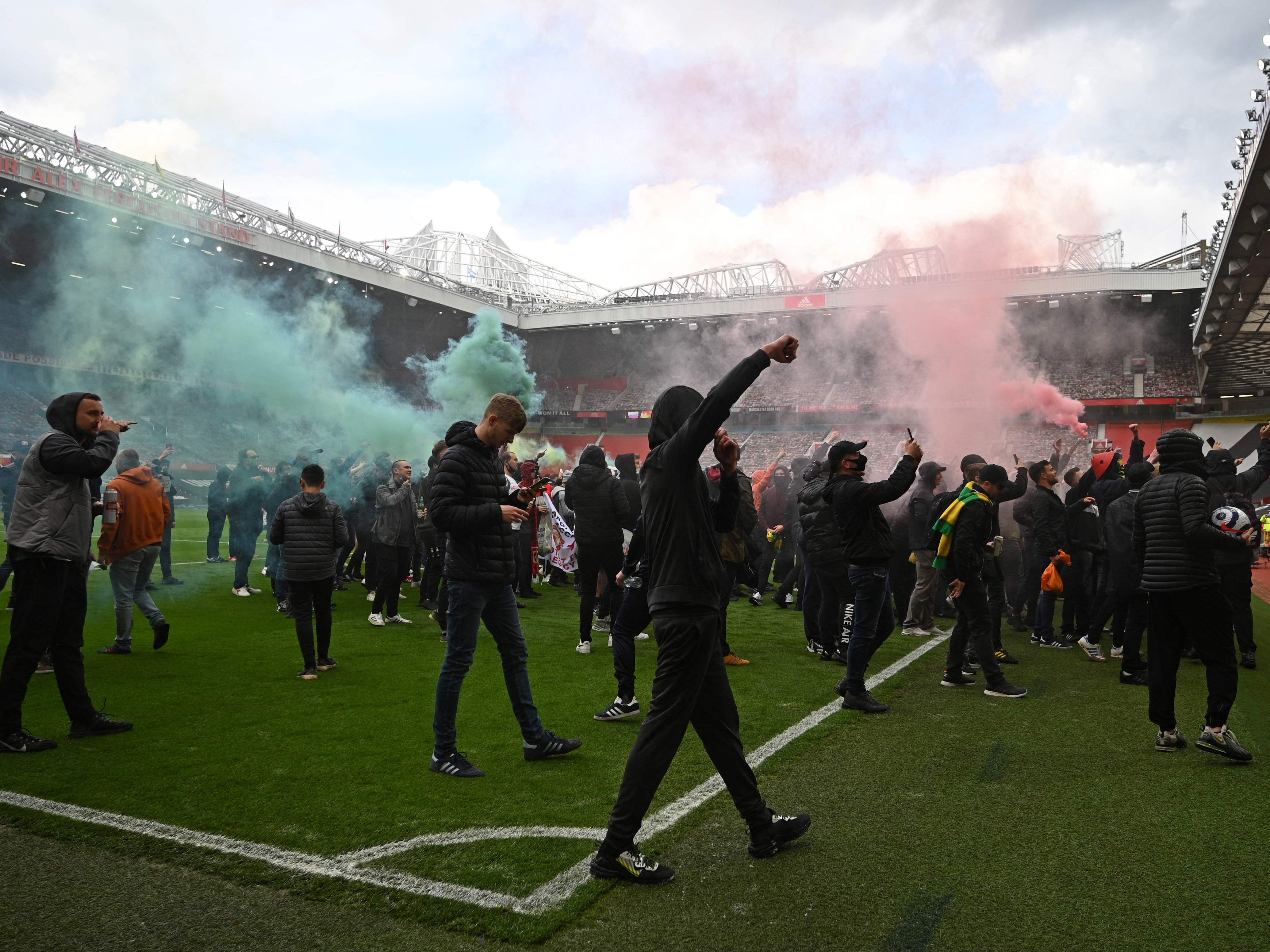 Many might argue it won’t change a thing, that the Glazers have been hard-nosed in the past and will continue to be hard-nosed now. That is entirely possible. It’s also possible that this gives them further consideration about this whole situation, and the medium-to-long-term future.

Many around the United hierarchy insist that the Glazers’ ultimate ambitions for their ownership have been based on two objectives, which would allow them to multiply the value of the club at a stroke. One was the Super League plan, and the guarantees of income a closed competition would have allowed. Another was a change to broadcasting rights, which might allow them to sell United games on an individual basis.

The first has been closed off for the foreseeable future, and it also completely closes off the second – in any form – given the big clubs have totally squandered their leverage. As one source at the top level of the game told The Independent: “It is possible these owners will just see these clubs and European football as a mature business, and decide to cash out.”

The postponement of a prize asset like a United-Liverpool game will – at the very least – only encourage that kind of thinking. That really can’t be discounted, or dismissed. But even if that doesn’t happen, and it is too late for United, this protest might still be important for the wider game.

It furthers the momentum of fan activism, just before the government is going to undertake a supporter-led review of the English game.

Greater representation in boardrooms, or changes to regulation on future ownership models, are under consideration. A new world for football is possible, so other institutions don’t suffer United’s fate.

United fans of course want to change their future. This is what the Glazers have unleashed.

Again, many might find fault with the manner of the demonstrations.

The legitimacy of this protest, however, is unquestionable.

This is what happens when you exploit the people’s game too much.