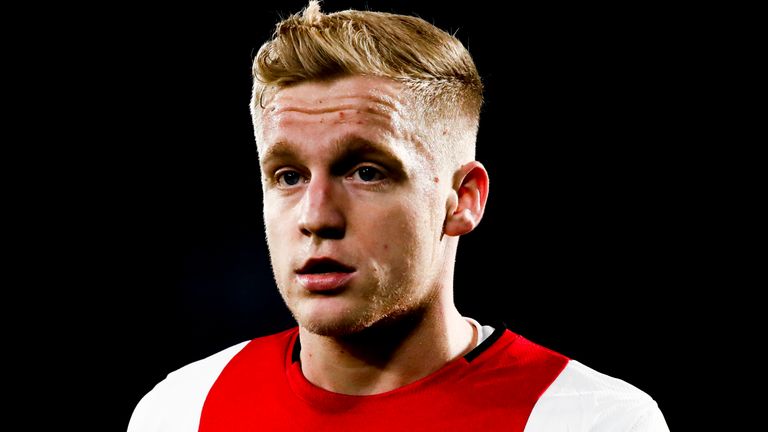 The latest transfer news and gossip on the players linked with Manchester United – and those who could leave the club.

The latest players linked with a move to Manchester United…

Donny van de Beek – Donny van de Beek has agreed personal terms with Manchester United and will complete a medical in the coming days ahead of a £40m move from Ajax (Sky Sports News, August 31); Van de Beek was left out of Ajax’s friendly with Frankfurt on Saturday with a transfer potentially imminent, and Manchester United one of a number of interested parties (Sky Sports News, August 30).

Sergio Reguilon – Manchester United are understood to be keen to sign Real Madrid defender Reguilon, who could be available this summer (Daily Star, August 29).

Lionel Messi – Manchester United are in position to make a move for the Argentine after he submitted a transfer request at Barcelona (Sport, August 26).

Philippe Coutinho – The Brazilian prefers a return to the Premier League and United are among a trio of clubs interested in the 28-year-old Champions League winner (Marca, August 26)

Jadon Sancho – Manchester United are ready to put their bid to sign the England international on hold for a year after being unwilling to match Borussia Dortmund’s £108m asking price for the winger. (Sunday Mirror, August 23); An agreement on personal terms is believed to be holding up United’s move for Sancho (ESPN, August 20); United have still not made an official offer for Sancho. If they make a realistic offer – close to Dortmund’s €120m (£108m) asking price – it is thought Sancho would be willing to tell Dortmund he wants to leave (Sky Sports, August 17).

Isak Hansen-Aaroen – Manchester United are signing the young striker – confirmed by a glowing Instagram post from his Norwegian club Tromso (The Sun, August 22)

David Brooks – The Bournemouth playmaker has been a long-term target for United and they are considering making an approach this summer (Manchester Evening News, August 20).

Jack Grealish – United have held talks with Aston Villa over a deal for Grealish (Mail on Sunday, August 30); United may off goalkeeper Sergio Romero in part exchange for Grealish (Daily Mail, August 20); The Aston Villa captain would welcome a move to United this summer (Express, August 13); Grealish is expected back at Aston Villa for pre-season training at the end of the month as United refuse to be pressured into meeting his £80m price tag (Daily Mirror, August 5); United are prepared to wait until late in the window before considering a move for Grealish as they push to sign Sancho (Daily Mail, August 4); United have cooled their interest in the Villa captain (Sky Sports News, July 28).

Issa Diop – West Ham are ready to sell Diop to Manchester United for a £45m transfer fee (The Sun, August 19).

Douglas Costa – Manchester United are looking at a double raid on Juventus for Costa and Alex Sandro (Daily Express, August 19); Manchester United are keeping tabs on Juventus winger Costa as they embark on their summer transfer business. While Jadon Sancho remains their No 1 target for that position, should that deal not come off, Costa is among the alternatives being considered by the club (Sky Sports, August 17).

Ben White – United have made contact with Brighton about their £50m-rated defender (The Sun, August 17).

Saul Niguez – United are set to make the Atletico Madrid midfielder their top transfer target this summer (Daily Mail, August 16); United are hoping to tempt the Spaniard into a switch to Old Trafford by offering him a contract worth £150,000 per week (Daily Star, August 15).

Paulo Dybala – Juventus are reportedly planning to offer the Argentine to United in a bid to sign Paul Pogba (Mirror, August 15).

Vinicius Jr – Manchester United appear to be switching their focus from signing Sancho to Vinicius Jr, but could face competition from Chelsea and Arsenal (Daily Star, August 13).

Kasper Schmeichel – United are weighing up a shock move for the Leicester goalkeeper to replace David de Gea as No 1 next season (The Sun On Sunday, August 2).

Callum Hudson-Odoi – United are considering lining up a shock move for the Chelsea winger (The Sun On Sunday, August 2).

Sandro Tonali – United are reportedly set to be knocked back by the Italian wonderkid, who is being chased by Inter Milan (Mail On Sunday, August 2).

Benoit Badiashile – United have entered negotiations to sign the Monaco defender, according to reports from France (Sunday Mirror, August 2).

Devon Arnold – Manchester United have handed a trial to the former Yeovil Town striker after the free agent impressed for the club’s U23s side (Daily Mail, August 28).

Marc Jurado and Alvaro Fernandez – Manchester United are closing in on the signing of two of Spain’s brightest young prospects (Sky Sports, August 28).

Alexis Sanchez – The United forward has left the club on a free transfer to join Inter Milan on a three-year deal (Aug 6).

Angel Gomes – United have confirmed Gomes has not taken up the offer of a new contract and has left the club. The youngster has joined Lille but will l immediately go out on loan to Boavista after joining the Ligue 1 side (Aug 6).

The latest on players linked with a Man United exit…

Chris Smalling – Inter Milan are keen on the United defender and may pay the £20m asking price for the 30-year-old, who has spent the season on loan at Roma (Metro, August 17): The defender still has a future at United – despite a year out on loan at Roma in Serie A (Mirror, Aug 16); Smalling leads Bruce’s wanted list this transfer window, having enjoyed a successful spell on loan at Roma last season, where he played 37 times to help them to a fifth-placed finish in Serie A (Sky Sports, August 15); nited are demanding £20m for Chris Smalling this summer, with Roma still desperate to snap him up (The Sun, August 14).

Paul Pogba – Juventus are reportedly planning to offer Paulo Dybala to United in a bid to sign the midfielder (Mirror, August 15); Pogba is expecting United to open contract talks once their Europa League campaign concludes (Sky Sports, Aug 13); The Frenchman is willing to make a dramatic U-turn by opening talks over a new contract at United (Daily Mail, July 9); Real Madrid are lining up a summer move for Pogba as part of their priority transfer business ahead of next season (Get French Football News, July 7).

Tahith Chong – The United winger is close to agreeing a deal to join Werder Bremen on a season-long loan (Sky Sports, August 15); United are open to allowing Chong out on loan amid reported interest from Bremen (Aug 6); Bremen have stated their interest in taking the United winger on loan (The Sun, Aug 6).

Eric Bailly – The United and Ivory Coast defender has been offered to AC Milan, but the Italian side are not interested in a deal (Gazzetta dello Sport, Aug 7).

Sergio Romero – The goalkeeper could leave Manchester United for Chelsea, Leeds or Everton this summer (Daily Star, August 19); Romero wants to hold showdown talks with Manchester United over his future – with Dean Henderson heading back to Old Trafford (The Sun, July 31).

Joel Pereira – Manchester United are ready to send the Portuguese goalkeeper to Huddersfield Town on loan. (The Sun, August 25)

Mason Greenwood – The 18-year-old’s form has earned a new £40,000-a-week contract at Old Trafford, just nine months after he signed his last (Sun on Sunday, July 19).

Timothy Fosu-Mensah – United will give the 22-year-old a chance to secure his long-term future at the club amid interest from clubs in Germany (Manchester Evening News, July 17).

Fred – The Brazil midfielder is open for talks over a new long-term United deal after a stunning turnaround in form (Sun, June 25).