Manuel Locatelli struck late to earn Juventus a 1-0 win over Torino in the Turin derby on Saturday, as the Old Lady stretched their winning run to four games in all competitions and kept a Serie A clean sheet for the first time in seven months.

The Italy international fired a shot in off the post with four minutes remaining, his second consecutive league goal, as Juve rose to eighth place with 11 points, three ahead of their 11th-placed rivals.

Torino controlled the first half as Juve failed to register a shot on target, but Massimiliano Allegri’s side improved after the break and Alex Sandro’s header required a fine save from Vanja Milinkovic-Savic before Locatelli’s late winner. 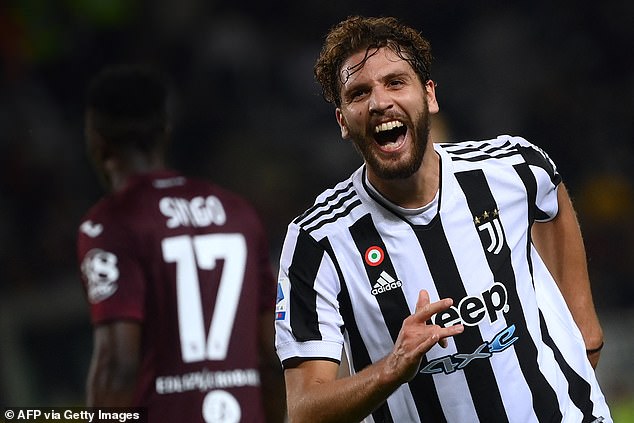 Ivan Juric’s side struggled to threaten Wojciech Szczesny’s goal, and Juventus kept things tight defensively to end a run stretching back to March of 20 matches in a row conceding in Serie A.

Allegri’s side earned an impressive and unexpected win over European champions Chelsea in the Champions League on Wednesday to stretch their unbeaten run in all competitions to five matches.

But the coach warned his players that the local derby would be an even greater challenge, with strikers Paulo Dybala and Alvaro Morata still injured and Torino having two extra days to prepare.

There were early chances for Juve as Moise Kean flashed a shot wide and Weston McKennie blasted over a promising opportunity. 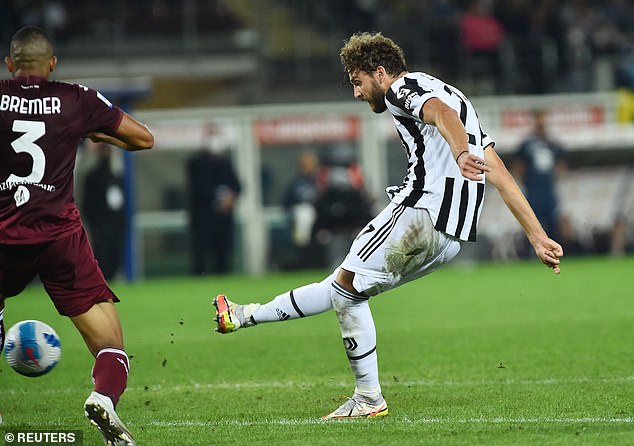 Locatelli marked his debut in the Turin derby in style, as his strike proved to be the difference 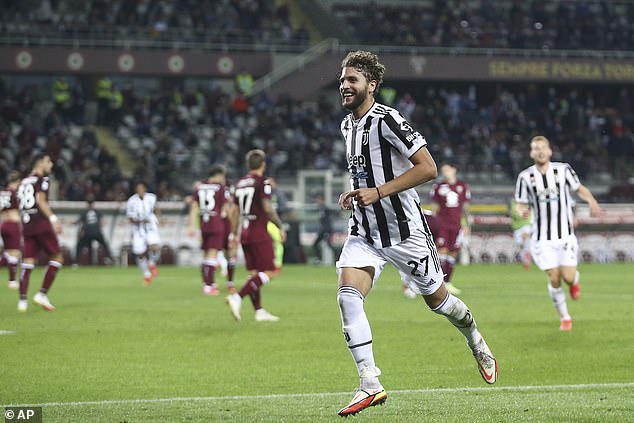 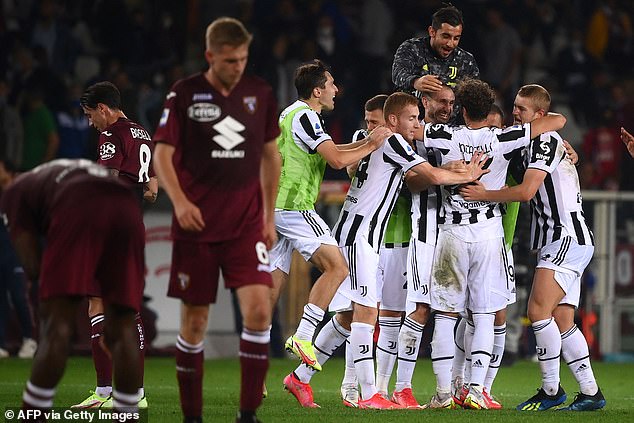 After a difficult start to the season, Juventus have won three straight Serie A games

Allegri introduced Juan Cuadrado for Kean at halftime, with Federico Chiesa returning to the striker role he played against Chelsea.

The change sparked some life into Juve’s attack as the Colombian teed up Sandro with an excellent cross that required a sharp Milinkovic-Savic save.

‘We were a bit too static in the first half, especially down the right, and Kean did better towards the end of the first half, but we lost possession a few too many times,’ the Juventus manager told DAZN after the game when asked about his tactical switch.

‘Toro lost intensity as time wore on and we moved more, so the more you move, the more you make the opposition lose sight of reference points.’

Locatelli found space at the edge of the area to fire home the winner in the 86th minute, before substitute Dejan Kulusevski thumped the foot of the post with a shot in stoppage time.

Asked about the Italy international’s contribution, the Juventus manager added: ‘Locatelli settled in well, he can improve a great deal. He is beginning to vary the moves, so short and long passes, he just needs to improve his positioning.’

Earlier on Saturday, Salernitana climbed off the foot of the table after Milan Djuric’s header sealed a 1-0 win over Genoa, their first victory of the season.

The newly promoted side’s victory moved them up to four points, one behind Genoa in 16th and one more than bottom side Cagliari.

Stan Collymore: I am not going to throw Jack Grealish under the bus