So he climbed into his car, and set off on the gruelling 18 hour, 850 mile drive down from Scotland to Dover, over on the car ferry, and then through northern France to FC Ingolstadt 04, on the outskirts of Munich. And right now, Fotheringham, assistant manager at the Bundisliga 3 club, is back at work, preparing for the re-start of the football season. Once the youngest ever Celtic player, the former Dundee, Norwich, Notts County and Fulham midfielder, if all goes according to plan, will be one of the first British people back in action in this most weird of seasons.

Bundisliga clubs have been in training for a week amid the coronavirus crisis, in small groups as they practise social distancing. But they plan to be playing again on May 9, behind closed doors.

Fotheringham, 36, no2 to Tomas Oral, is hoping to steer Ingolstadt – two points off the promotion places after an agonising play off relegation defeat last summer – to promotion back to Bundisliga 2 at the end of this weird season, COVID-19 or not.

He said: “I wasn’t surprised to get the call.

“I jumped in my car and set off. We live just outside Dundee. It took me nearly eight hours to Dover, another hour and a half on the ferry, and then another eight to Ingolstadt, which is just outside Munich.

“There weren’t too many cars on the road, so the journey was not too bad. I was isolated and safe in my car.

“It had to be done. We and the players could not wait to get back to work.” 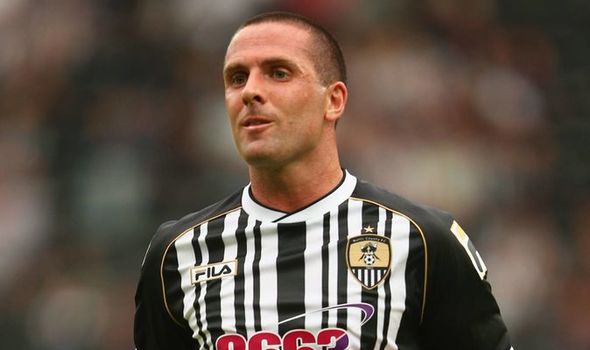 Left behind in the Angus countryside are wife Amy and sons Mason, 5 and Conor, 2. Was Amy worried about her husband travelling all that way in these perilous times?

Fotheringham says: “She was fine. Amy knows I have a job and responsibilities. We’ve been married ten years – she knows the situation in football. She is really supportive.

“We have got a lovely farmhouse up there, so we have always got our base. Normally they come with me, but it was impossible.

“Of course I miss them. I am FaceTiming them, I did an Easter egg hunt for the boys on that. There’s lots of fresh air, space for them to run about.”

Fotheringham had a nomadic playing career after making his Celtic debut at 16, taking in 14 clubs in Scotland, Germany, Switzerland, Cyprus and England. Since turning to coaching he worked at Karlsruher with Oral, and Ingolstadt last year, where they only just failed to keep the side up, before being asked back a month ago. They had one match – and then COVID-19 shut the game down.

Ingolstadt five years ago were in Bundisliga 1 – and Fotheringham is eager to get them back in the top flight.

He says: “I love German football. I had two years as a player at Freiburg, played under Felix Magath at Fulham, and worked with Tomas at Karlsruher.

“I see my future as a manager, first of all in the Bundisliga, and then hopefully in the Premier League.

“It was heartbreaking getting relegated. We almost saved them, but lost in the play off. But now they have asked us back – and we jumped at the chance.”

Is he worried about the risk of COVID-19?: “The Germans are so far ahead of us.

“They plan for everything, whereas we just seem too wishy washy. There is no leadership. Here they grab the bull by the horns.”

In Germany, where 300,000 people are being tested per week, the number of deaths fell for the sixth day running on Wednesday.

Fotheringham said: “Hopefully we can get a decision soon from the government on whether we can play – obviously behind closed doors.

“We have all been tested this week. It has to be strict. You have to minimise the risk. But we cannot wait.”