Home » Soccer » MARTIN KEOWN: England beware of the Danish overloads on the wings

MARTIN KEOWN TALKS TACTICS: Beware of the Danish overloads on the wings and Vestergaard’s Van-Dijk-esque long balls out from defence… but what’s the one way to beat them? Get AROUND the back!

Denmark are a tough team who won’t give England an easy game.

One strength of theirs, which Gareth Southgate’s side will need to be wary of, is how they create overloads on the wings.

Take a look at this example against the Czech Republic. Martin Braithwaite (circled) has come all the way from the left-hand side of the pitch to the right-hand side and is standing on the touchline.

His fellow forward Mikkel Damsgaard (also circled) has dropped deep towards the ball while right wing-back Jens Stryger Larsen is breaking behind into the space. 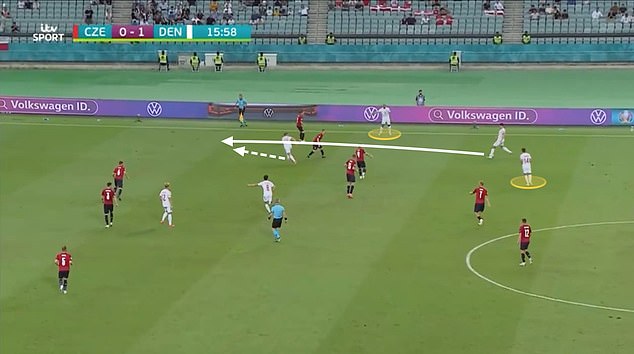 This picture shows how Denmark like to overload the wings, with Martin Braithwaite (circled on the left) and Mikkel Damsgaard (also circled) drawing players out to allow team-mates to make runs in behind down the flanks. England will need to be wary of this on Wednesday night 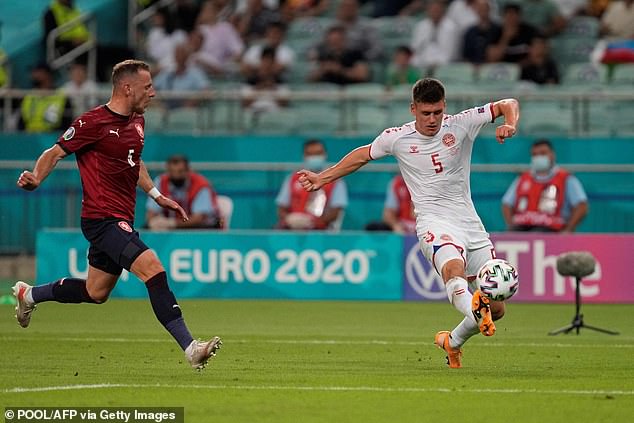 He’s ready to run on to a pass from Andreas Christensen, who’s stepped up from defence into midfield.

The move ends with Larsen crossing and Thomas Delaney is disappointed to not score his second goal of the game.

Denmark might well try to recreate this scenario at Wembley on Wednesday night.

Christensen is someone who likes stepping forward with the ball and, when he does, Pierre-Emile Hojbjerg will either drop to cover his position in the back three or stay in midfield to add an extra man. 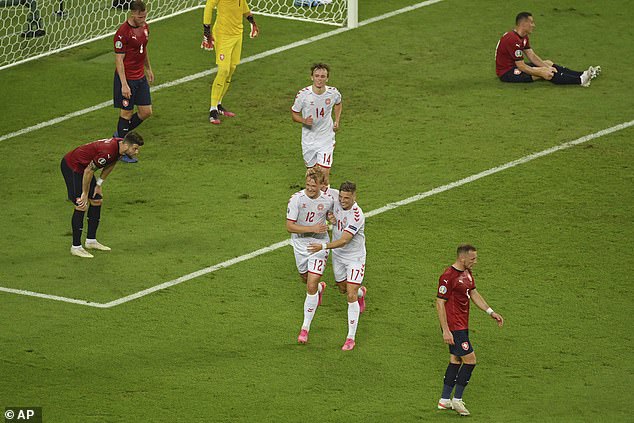 It’s a clever system of moving parts which their coach, Kasper Hjulmand, has created.

While Denmark were more conservative when qualifying for this tournament under then-manager Age Hareide, they now play differently.

They like to press high — only Holland and Portugal won possession in the final third more than Denmark in the group stages — and they have got a stronger offensive outlook.

Striker Kasper Dolberg is someone who has really grown into this tournament.

My old team-mate Patrick Vieira signed him for Nice from Ajax and he’s shown his ability to score and link up play after forcing his way into Hjulmand’s starting line-up.

Supporting him are the two forwards Braithwaite and Damsgaard who will test opposition defenders by running directly at them.

At left wing-back they’ve got Joakim Maehle, who’s really made his mark on this tournament and produced an outstanding assist with the outside of his right foot against the Czechs. 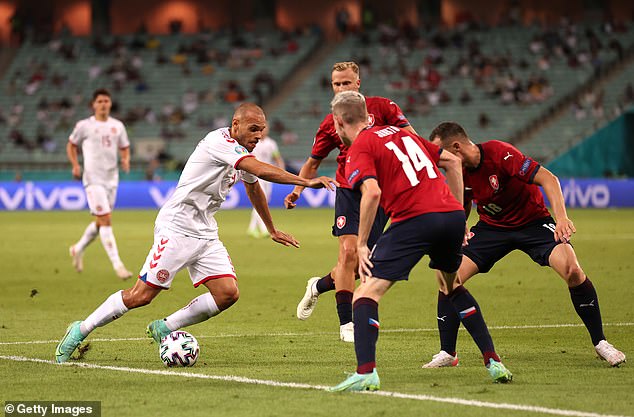 Six warriors make up the core of this Denmark side.

It starts with goalkeeper Kasper Schmeichel, who then has a back three of Christensen, Simon Kjaer and Jannik Vestergaard in front of him, followed by a midfield two of Hojbjerg and Delaney.

This will be the barrier blocking England’s route to goal. Of the teams left in these Euros, Denmark play the highest percentage of long passes in their games.

Their defenders don’t mind going direct. I consider Vestergaard one of the Premier League’s most underrated centre backs. 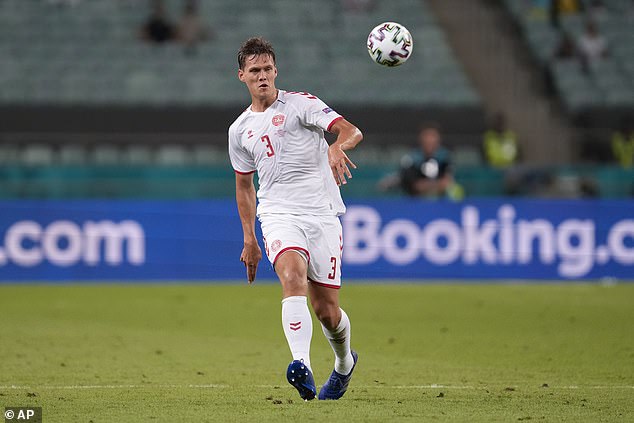 He’s rarely ruffled and at 6ft 6in, he’s a commanding presence. He’s a beautiful passer of the ball, as shown when he set up Denmark’s second goal against the Czechs.

Vestergaard is more than capable of playing pinpoint passes from the left side of the defence — similar to what we’ve seen from Virgil van Dijk in the past. Kjaer loves to do that from the centre too.

If England decide to press Denmark’s back three, they need to recognise that Vestergaard and Kjaer could respond by playing accurate long passes to the front players.

England analysts will have noticed how much of an impact Kevin De Bruyne had in Belgium’s group game against Denmark and the way he was exploiting space. We can learn from that.

At Wembley I want to see the two wide players, on either side of Harry Kane, making use of the space on the wings, behind Larsen and Maehle.

As good as Vestergaard is, he’s shown a reluctance to come out to press the ball when opponents get behind Denmark’s wing-backs. 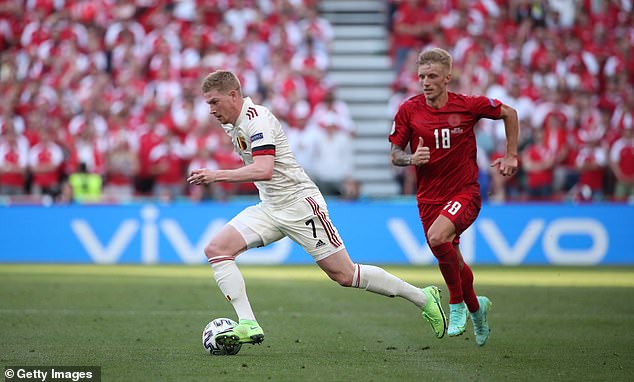