‘I always enjoy responsibility. I’m captain for my country’: Martin Odegaard says he would relish the chance to skipper Arsenal and is not fazed by the armband’s apparent curse over recent years

Martin Odegaard says he would relish the chance to captain Arsenal and is not fazed by the armband’s apparent curse over recent years.

Odegaard is expected to take over as Arsenal skipper following the departures of Pierre-Emerick Aubameyang and Alexandre Lacazette.

Aubameyang, Mesut Ozil and Granit Xhaka have all been caught up in controversy after taking the armband, while Laurent Koscielny, Robin van Persie, Cesc Fabregas and Thierry Henry all left while in charge. 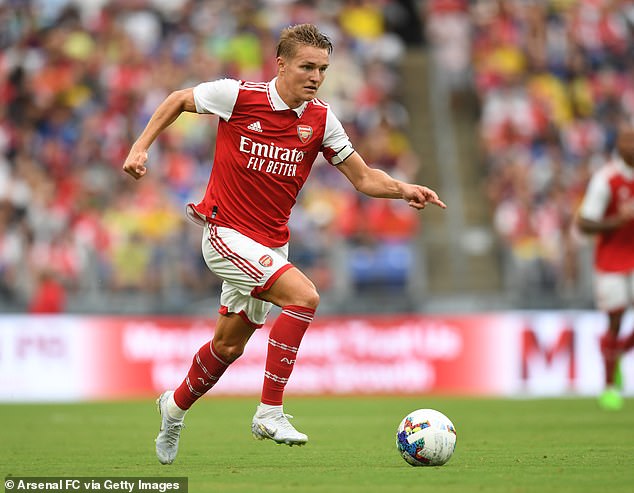 ‘It’s not something I think about. I think about the future, and to make that as good as possible, so we’ll see what happens,’ Odegaard said on Friday.

‘I always enjoy responsibility. I’m captain for my country (Norway) and it’s a nice experience, so I enjoy that.

‘I don’t know anything about the situation here, I think that question is for Mikel (Arteta) and the club, but if he asked me of course I would be happy to do it.’

Arsenal face Chelsea on Saturday in the final match of their US tour, less than two weeks before the new Premier League campaign kicks off.

Mikel Arteta’s side missed out on the top four last season after a late collapse and Odegaard has warned their rivals to expect an Arsenal ‘hungry’ to right that wrong.

‘We had it in our hands, so it was really disappointing in the end. I think you will see a hungry Arsenal team coming back now,’ he said.

‘I think we learned that we need to be sharp in every situation in every game. This league is so tough so you need to be at your best every time you play. We have to use that in a good way.

‘We need to use that anger and disappointment and take it into this season and show that we have improved, we have learned, and hopefully we can do that now.’ 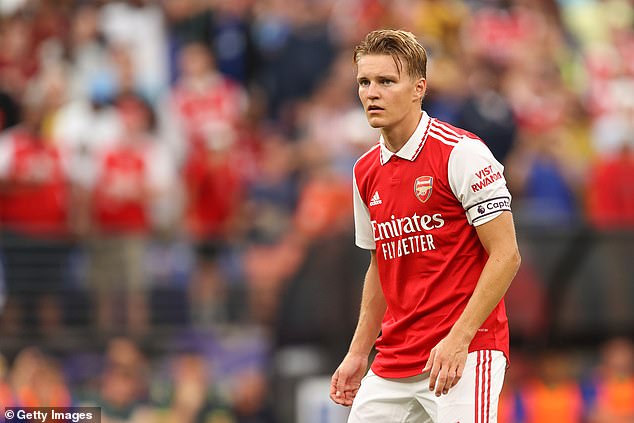 Odegaard was asked whether Saturday’s opponents Chelsea are the top-four side most vulnerable to the chasing pack.

‘I don’t like to speak about other teams,’ he said. ‘We need to focus on ourselves. The main thing for us is to improve from last season.’

The 23-year-old was speaking shortly after the arrival of Oleksandr Zinchenko from Manchester City was confirmed. Much has been made of how characters such as Zinchenko and Gabriel Jesus will help Arsenal.

‘I don’t think we lacked something really, but I think it’s always an area to improve – the mentality of the team — and I think all the players coming in have brought something good,’ Odegaard said.

‘The energy, the personality. They bring good vibes, they push the team. On and off the pitch they’re good people, and I think that’s important for the team.’

He added: ‘We have a young team, but I think all the players have been through a lot. We have a lot of experience, especially for a young age. We have to use that in a good way and hopefully we’ll just keep improving with time, with the players getting older and more experienced. I’m really excited for the future.’

Neymar out, Messi in for Brazil, Argentina clash