MARTIN SAMUEL: Gareth Southgate has made the impossible possible – he’s created an England side capable of a real crack at the Qatar World Cup and if he can alter the image of this cursed tournament, he truly will be The One

We were talking relevance. How the impossible job became one that Mauricio Pochettino or Thomas Tuchel would walk into, gladly, tomorrow.

How a team that, six years ago, appeared to have hit rock bottom was rehabilitated into one of the strongest in tournament football. And because Gareth Southgate is not a conventional England manager in so many ways, he came at the subject from an entirely original angle.

‘I remember during the Black Lives Matter protests, there was a fantastic comedian who said ‘all we’re asking is that we matter, nothing more’,’ Southgate recalled. ‘And maybe we’ve made the impossible just look possible, that would be the analogy. Maybe we’ve made it look exciting for other people and I can understand that.’ 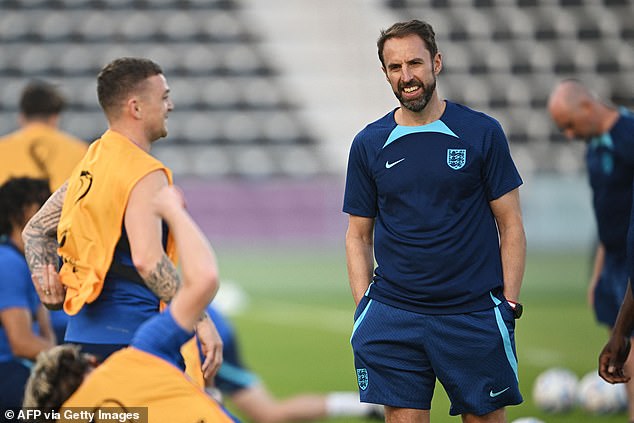 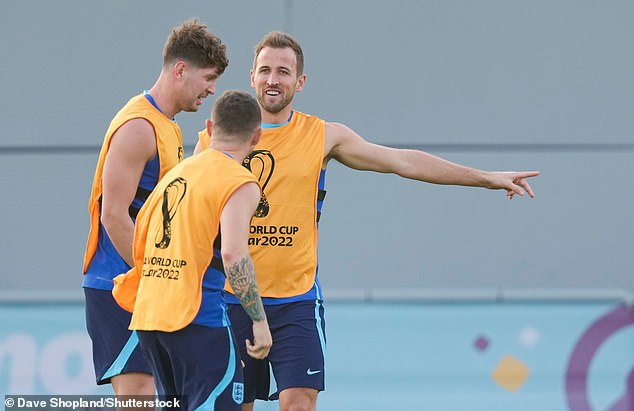 And because nothing moves swifter than the rush to judgment in modern times, Southgate’s employers were very nervous that his words might be misinterpreted, that he could be accused of trivialising a serious matter.

So for the record, Southgate was not saying that managing England was life or death, or drawing comparisons between a game and a global protest movement rising from death and righteous anger. He knows what matters. He knows where his role resides. But relevance, yes, he understands that.

In his sphere of influence he has changed perceptions, he has made the wider world look differently at England’s team and at his position as their coach. Would Pochettino, Tuchel, or their contemporaries, have coveted the England manager’s job when Southgate took charge in 2016? 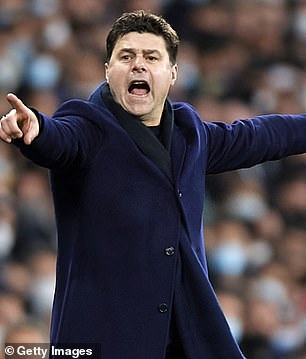 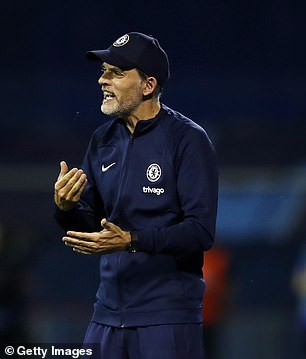 Think of the leading foreign coaches in and around English football at the time: Jose Mourinho, Pep Guardiola, Jurgen Klopp, Arsene Wenger, Louis van Gaal, Antonio Conte, Ronald Koeman, Pochettino. Were they jostling for an interview when Sam Allardyce stepped away?

England had just exited a tournament to Iceland. The reason the Football Association promoted Southgate was that they did not have too many options beyond. Since, he helped put together two of the most credible tournament performances in English football history. His peers now look at his squad and fancy their chances.

Some will argue that reflects poorly on Southgate. That the reason Pochettino or Tuchel would take the national role is they believe it can be done better.

If so, it will not be easy. No England manager had reached a European Championship final, and only one predecessor got as far as Southgate did in a World Cup on foreign soil. 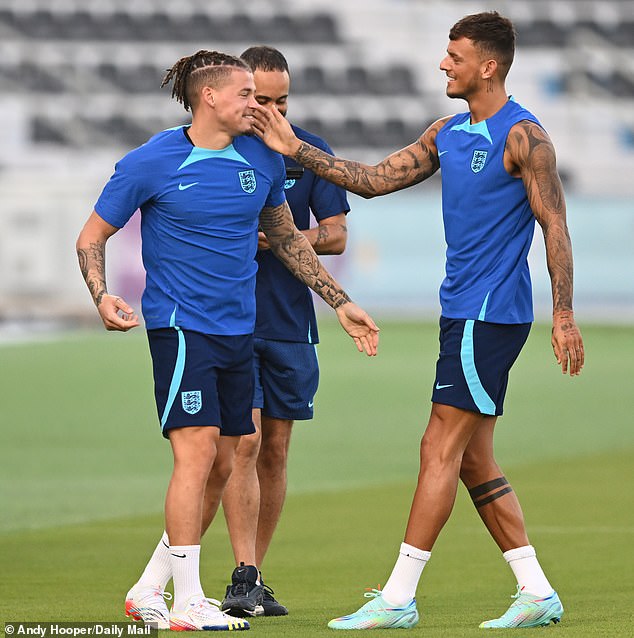 So, while his successor will be thinking, one more win and sainthood awaits, equally, Southgate would have every reason to ask them: where were you when we were s***?

Meaning even if he found a unique way of explaining it — Kevin Hart is not a traditional reference point for England managers, and he also slipped in a little French by using the phrase ‘plus ca change‘ with reference to the rise in expectations — Southgate knows what he has done.

If this is his farewell tournament, as many suspect, he leaves England in a much better place than he found it. There is a united spirit, a production line of promising young players, and an older group of significant experience. It is a good job now and Southgate has made it so.

‘We want England to be competitive for years to come and I believe that our academy system has done that,’ he added.

Yet it isn’t just the relevance of the national team that is at stake when England’s World Cup begins in Al Rayyan on Monday. This is a World Cup beset with image problems.

The FA confirm only 3,000 members of the England travel club will be coming to Qatar, which is the minimum allocation for away fans in a Premier League stadium with a capacity of 30,000 or more. 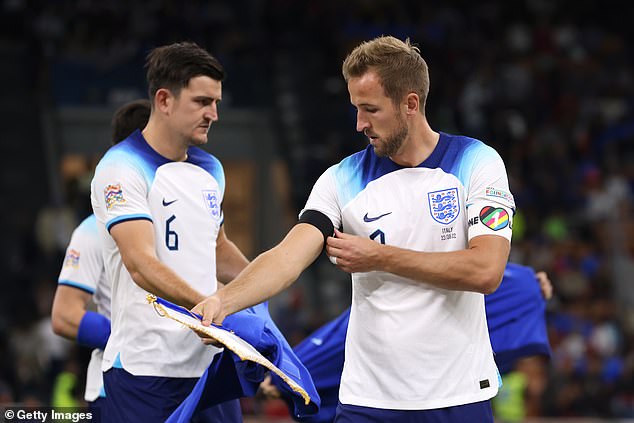 Back home, vendors report a quieter time than usual. There is a distinct absence of St George Cross flags on the streets and sticker frenzy in the playgrounds, with disgust the overriding emotion towards a World Cup that has been forged on corruption, controversy, modern slavery and death.

The sourness continued on Sunday with the revelation that FIFA had spent their waking hours attempting to checkmate the teams planning rainbow armband protests in support of the gay community.

Such a mild gesture of acknowledgement — homosexuality remains illegal in Qatar — would only offend the truly intolerant, yet despite president Gianni Infantino affecting LGBTQ solidarity in his self-serving speech on Saturday, FIFA appear to have found a way to cast shade on the rainbow.

The threat that any captain wearing the OneLove armbands would be cautioned before kick-off is a serious challenge. It would put Harry Kane, Gareth Bale, and others, out of the third group game, and several knockout matches, maybe even the final.

The Football Association will not wish to lose face over this, yet the risk-reward in the gesture risks dismantling the entire campaign.

FIFA come out of this very badly, if it happens, too. What does it say of them, and of Infantino’s empty words? A tournament already suffering in the eyes of the public would sink yet further.

Southgate acknowledges this. It is not often an England manager has to remind his players of the meaning of representing England at a tournament but, then again, this is still shaping up as a World Cup like no other.

Taking charge of Portugal in 2003, Luiz Felipe Scolari felt players like Deco, who was born in Brazil, were distanced from the group. He compiled videos reinforcing kinship, showing the Brazilian public celebrating Portuguese wins as if they were their own.

Southgate has not had to resort to extremes of motivation but confirmed on Sunday that his first job was to make sure his players did not feel too detached from the tournament. 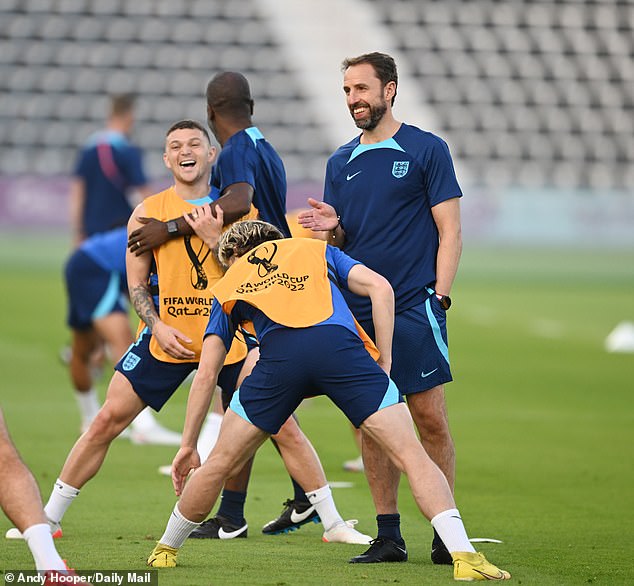 ‘What we have tried to do in the last seven days is excite them about going to a World Cup and that has been balanced with the topics they have been asked to discuss which are very serious,’ he explained.

‘There is a lot of negativity around the tournament and I want them to understand the unique honour of representing England at a major competition.

‘This is what they have wanted to do their whole lives. We have tried to address those things, to make it special. We talk. We remind ourselves of the privilege of being here and the uniqueness of it. Only 16 England teams have ever been to a World Cup.

‘A lot of the staff and players are at their second, Raheem Sterling is at his third. You have to remind yourself of this moment in time. Tournament football is different. Germany have always been the prime examples of that.

‘It is hard to talk about form because you are always two months between games in international football, so what actually is form? What there is, is pedigree.

‘Our page did not quite look like that. I’d love it if it did in 40 years’ time and that should be our aim, to be consistently challenging. That’s how we need to be, really.’ 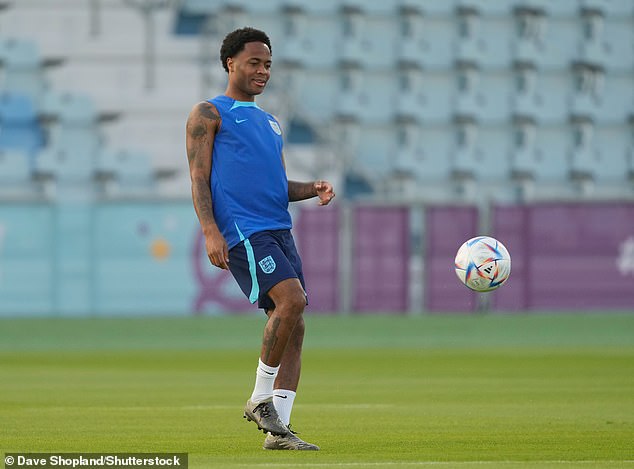 To that end, the match with Iran is an opportunity to gain momentum. Carlos Queiroz’s team are no fools, yet the nation has never progressed beyond the first round or group stage at any World Cup.

It also seems likely Southgate may go with four at the back, which is his formation when faced with a winnable tournament match. Queiroz is realistic.

‘England are serious candidates to be in a medal position, candidates to be world champions,’ he said. ‘They have a fantastic team of talents and a coach who knows them. For the majority of our players to face England, it is magic.

‘Special for them, special for us, it is life-giving. I think this is England’s most competitive team since 1966. I worked with Paul Scholes, with David Beckham, but this team is more functional, more realistic. It’s very different to before, their approach, and it makes them dangerous.’

This is the England Southgate has created. It isn’t always pretty, it doesn’t always win him friends — and he gets booed when it goes wrong, because he is viewed as over-cautious — but his blend of youthful courage and pragmatism has made the national team relevant again.

Perhaps Qatar 2022, too, if the public holds its nose while England progress. And if he can alter the image of this cursed tournament, he truly will be The One.