Harry Kewell believes Ange Postecoglou is well on his way to being recognised as one of European football’s top managers, tipping the former Socceroos boss’ ultra-aggressive style will make Celtic a difficult challenge for any team they face in the UEFA Champions League.

The Scottish champions will find out next Friday morning (2am, AEST) who they will meet in the Champions League’s group stage when the draw is conducted in Istanbul – the city where Kewell held aloft Europe’s top club trophy almost two decades years ago as a player, when Liverpool claimed a famous comeback win over AC Milan on penalties in the 2005 final. 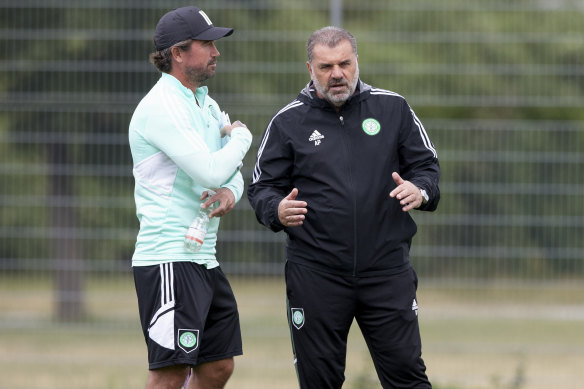 Harry Kewell is taking in as much as he can from Celtic boss Ange Postecoglou.Credit:Getty

Celtic haven’t reached the Champions League proper since 2017-18, and drawn from pot four this season, they will be regarded as the minnows of their group and given little chance of progression to the knockout phase by experts and pundits.

However, that will not deter Postecoglou from going on the attack, no matter who they’re up against – as Kewell has quickly learnt since joining him at Celtic two months ago as a first-team coach, after being sacked from his last managerial role at non-league English side Barnet.

Like almost everyone who comes into Postecoglou’s orbit, Kewell is completely enamoured by a man he described as a true “master” of his craft.

“When people talk about he plays a beautiful way … I mean, you should see the training sessions,” said Kewell, who was speaking to the Herald and The Age to promote the new FIFA 23 game, which he’s included in as an Ultimate Team “hero” as part of a collaboration with Marvel Comics.

“He’s probably Australia’s greatest coach. And now, he’s starting to push up to be one of the greats of the European game.”

“These boys are put through it. He demands, every single day: ‘Get that ball, move that ball’. Intense? Wow. I feel like I’m intense. He just takes it to another level, but in a good way. I get to see it every day. I usually don’t get taken aback by certain movements in certain plays. But when I see certain things, I go, ‘Decent, they’re decent.’

“The one thing he does paint is the clearest pictures. You would have to be silly not to understand it, because he picks out everything and he will show you, and then you can’t argue with it, because it’s there: it’s in black and white, plus it’s in colour, plus it’s on video, plus it’s on the pitch. It is as clear as day when it comes to the messages. And I think that’s why the players love it.”

Now part of a strong Aussie continent at Celtic, which also includes Socceroos star Aaron Mooy, Kewell’s role gives him a sturdy platform to rebuild his coaching career, which hit the rocks after tumultuous stints at Watford, Crawley Town, Notts County, Oldham Athletic and then Barnet in England’s lower divisions – although he was keen to stress that his coaching CV is stronger than it might appear at first glance, and that he worked through difficult circumstances at some of his previous clubs, where owners or directors had unrealistic expectations of success.

“People turn around and go, ‘Yeah, you know what, Harry, your time as a manager, maybe, you know’ … I’m not going to lie, it hurts when people think that you’ve spent your time,” Kewell said. “But when you actually look back and you do your research, the clubs that actually worked for, I’ve done well for, and when I’d left, look what’s happened to them – which is a shame, because they’re great clubs.” 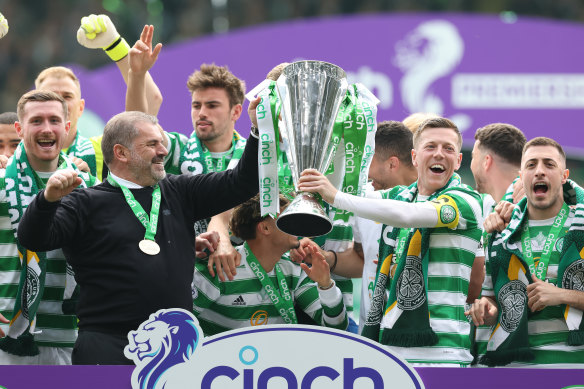 This job comes without the added off-field pressures of being a manager, and means the 43-year-old can focus on his passion: working directly with players on the training pitch and helping them improve.

Already, Kewell said he has picked up “two or three valuable things” from Postecoglou, which he’ll apply if and when he chooses to branch out on his own again as a head coach, which he did not rule out. 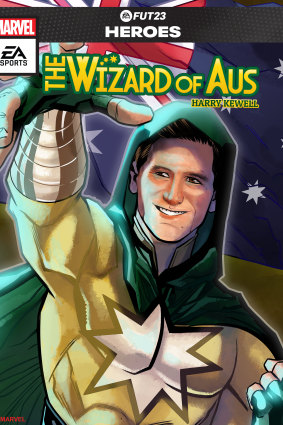 “It’s pretty good to sit back and watch and learn, from I have to say, a master,” Kewell said.

“He’s probably Australia’s greatest coach. And now, he’s starting to push up to be one of the greats of the European game.

“You just pick his brains. It doesn’t matter, whatever it is, you can just ask him a simple question, and he’ll just give it to you straight. When I received the call from him, I was blown away – the way he has spoken, the way he had mentioned me to be a part of it. I was like, wow. It takes a lot for me to be impressed.

“What the manager came into last year, and what he’s created … I mean, you just walk around town and people love him. They love his aura, they love the way he’s a straight talker – he commands the room when he walks in there. But the important thing is he’s winning football matches, and [doing it] his way. That’s what’s Celtic have missed just recently is their identity. And now I think you can clearly say they’ve got an identity, and now they’re working on that identity to become even better.”

The next frontier for Celtic is the Champions League, which Kewell noted has been recently dominated by disciplined counter-attacking teams – not ones who prize possession nearly as much as Postecoglou’s ball-hungry Celtic.

“But then again, if you train a certain way, and then you came up against a [bigger] team, and you completely changed your philosophy and ideas, it’s going to throw a lot of people off,” Kewell said. “You only live once, right? So, why not just play the way that you’re comfortable with, and go out there and see it?

“I would have been buzzing: ‘Just give me the ball, yeah, I’m ready.’ That’s what the players love. They will go out there with no fear. I would love to play the best teams because I think his style will be a challenging for anybody – especially at Parkhead.

“It’s a big year for Celtic because the expectations are huge. But he talks about, ‘Let’s just go out there and be the best we can be.’ That’s a great motto for the players to understand and work by.”