Micah Richards has called Graham Potter’s decision to drop Christian Pulisic for Tuesday’s Champions League trip to Milan ‘very harsh’ after the American scored vs. Wolves at the weekend.

Pulisic has found opportunities hard to come by this season but was given a rare starting berth last weekend vs. Wolves, and took his chance as he scored a beautiful dinked finish in the 3-0 win.

But the American did not retain his place for Chelsea’s matchup with AC Milan despite impressing over the weekend, and Richards thinks that was the wrong call. 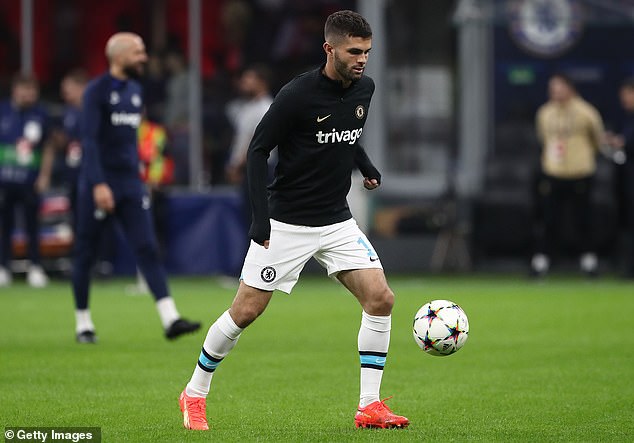 Christian Pulisic was named on the bench for Chelsea’s match vs. AC Milan

‘He was getting in these right areas, he was raring off the left going into the center,’ he said Tuesday on CBS Sports.

‘He looked full of confidence. He’s been asking for the games, and when he plays a game, he’s got to deliver.

‘I think it was very harsh for him not starting tonight.’

Richards’ co-host Thierry Henry was less convinced that Pulisic deserved a starting place, and asked who should be benched to make way for the winger.

The former Man City defender singled out Mason Mount, who has yet to score this campaign for Chelsea.

‘Mason Mount’s form this season hasn’t actually been that great, but I think Pulisic what he’s shown the last couple of games, not just against Wolves, but against Palace as well,’ Richards said.

‘I thought he was unlucky not to start tonight.’

Chelsea lead Milan 1-0 at the time of writing after a Jorginho penalty.

‘Coffee shop talk’: Why Milicic is ignoring the hype around Macarthur FC