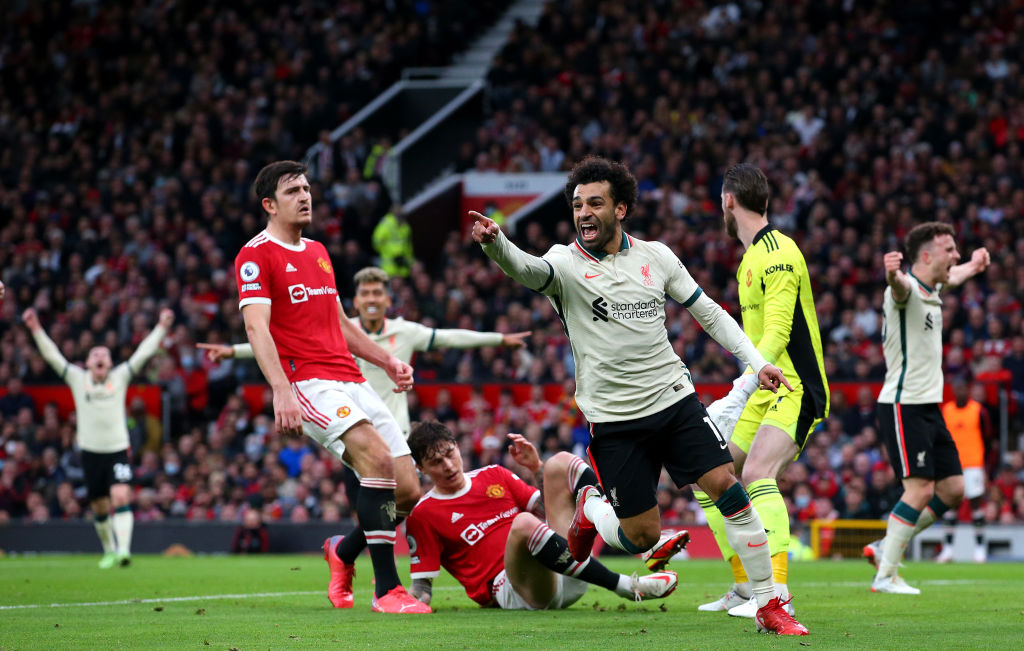 Naby Keita and Diogo Jota put Liverpool 2-0 up inside 13 minutes at the Theatre of Dreams as Man United’s inconsistent form under Ole Gunnar Solskjaer continued.

Salah scored twice before half-time to pile more misery on the Red Devils and surpass Chelsea legend Didier Drogba as Africa’s top goalscorer in the history of the Premier League.

It was the first time Manchester United have trailed 4-0 at half-time in a Premier League match.

Salah, 29, scored his third and Liverpool’s fifth shortly after the break, taking his overall tally to 105 goals.

Speaking on Sky Sports, Red Devils legend Gary Neville said: ‘This is the first super team they are playing against and they are getting pulled apart.

‘I said it before, half decent teams are scoring goals against them, proper teams will batter them.’

Former Premier League striker Chris Sutton added on BBC Radio 5 Live: ‘That must rank as one of Manchester United’s worst halves in their history.

‘They got Ronaldo, Varane and Sancho, they got everything together and they still can’t compete with Liverpool, Manchester City and Chelsea. It had to be this season for Ole and it just isn’t happening for him.’

‘I sent him a message to congratulate him,’ Drogba said. ‘I am happy for him. He’s in great shape right now and I hope he will continue.

‘It often happens that our little brothers overtake us and it’s good. Salah is also heading towards another record, that of the best African scorer in the history of the Champions League.’

As well as becoming Africa’s top goal-scorer in the Premier League, Salah also became the first away player to score a hat-trick at Old Trafford since 2003.

Coronavirus: Barnet to lay off all non-playing staff with cashflow affected by suspension of games