Report and highlights from the Sky Bet League Two play-off final between Morecambe and Newport at Wembley as controversial Carlos Mendes Gomes penalty in extra-time earns promotion for the Shrimps to the third tier.

Morecambe reached the third tier of English football for the first time in their 101-year history as they beat Newport 1-0 after extra-time in the League Two play-off final.

Carlos Mendes Gomes scored the only goal of the game from the penalty spot in the 107th minute – albeit via a slightly dubious decision to award it – to send the Shrimps to victory at Wembley and into League One. It caps a remarkable season for Derek Adams’ side. Morecambe had spent the last 14 years in League Two, with more than one close scrape with relegation along the way.

For Newport, it is a second play-off final defeat in three years at this level. Their 34-year wait for promotion to the third tier will go on into next season.

It was a first half of few chances at either end. The major talking point was whether or not Newport should have been awarded a penalty after 12 minutes as Kyle Letheren caught the face of Scot Bennett when he was trying to punch a long throw clear.

Liam Gibson went close on 42 minutes for Morecambe at the other end, played in by Mendes Gomes before rolling a shot past Tom King that was then cleared by Liam Shephard, while Bennett saw an effort deflect inches wide of the Shrimps goal in stoppage time.

It took until the 78th minute for either goalkeeper to be forced into a proper save, as Shephard’s fierce low drive from 20 yards was palmed wide of the Morecambe goal by Letheren, and eventually, the game rolled into an inevitable extra 30 minutes. 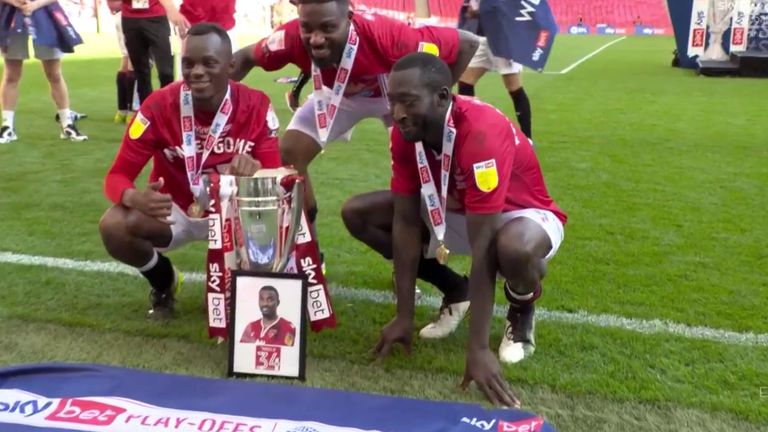 Finally, after 104 minutes, the game produced its first real opening as substitute Nicky Maynard crossed for Joss Labadie, but somehow the Newport captain put the ball over the bar from six yards.

Then, shortly after the break, the deadlock was finally broken. John O’Sullivan was brought down by Ryan Haynes and, despite him appearing to have been outside the box when the challenge was made, referee Bobby Madley pointed to the spot, from where Mendes Gomes did the rest. Morecambe’s Derek Adams: “It was a difficult match and there wasn’t a lot of good play. We changed formation a few times in the game, tried to change and eventually got ourselves in the box and got a penalty. I’m just delighted for all of the supporters today.

“Football’s football. We got a good group of players in at the start of the season and we thought we could get promotion. It’s a fabulous day for the whole of Lancashire. I was never nervous about the game and I’m sorry, but it was written in the stars. It was Morecambe’s day.”

Newport’s Michael Flynn: “First of all, I want to say congratulations to Morecambe. They have had an outstanding season. Derek Adams has done a fantastic job and they have got a very good group of players who never know when they are beaten. That’s the most important thing to say at the minute.

“Where it went wrong, two very, very bad refereeing decisions, again, have cost us at Wembley. It [the penalty decision that led to the winner] was a terrible decision. If there was contact, it was outside the box and he has made the most of it. How we weren’t given the one in the first half, where the goalkeeper has punched our player in the head…

“I want to concentrate on [giving my] congratulations to Morecambe and how proud I am of my players and staff for the season they have had this year and the way they have conducted themselves. I’m just gutted for those fans who have had to see their team on the wrong side of bad decisions again at Wembley.”

Analysis: A tale of two penalties at Wembley

In a game of limited events at Wembley, there is no doubt the two talking points will surround the penalty that was not given early to Newport, and the one that was awarded in extra-time to Morecambe…

“[Newport’s] was an absolute stonewall penalty. We see how much protection goalkeepers get when the shoe’s on the other foot. He’s not got anything on the ball and it looks like two hands. Zero contact with the ball – it’s a clear penalty for me.

“It’s about decisions and key moments. It could have been different for Newport had they got that first-half decision and they will feel Morecambe’s penalty was a soft one.”

“It’s unintentional, he’s got there late and caught him but I do think it’s a penalty. You have to give credit to Morecambe but Newport will feel they have been on the wrong end of two key decisions.”

“It was a dive for me [by O’Sullivan for Morecambe]. Definitely no penalty! You look at the penalty that should have stood [for Newport] and then this incident. It’s heartbreaking for Newport, sickening.”

Man of the Match: Yann Songo’o

Morecambe were on the defensive for large swathes of the game at Wembley, and without the tenacity, organisation and leadership of Songo’o, it’s hard to see how they would have got over the line.

“At the start of the season, no one believed in us. The manager managed to create a brilliant squad and I’m proud of every single one of them.

“When he came in, he said he wanted to change the mentality of the club. To get promoted this way is unbelievable. I dreamed of a day like this.”

What a moment it was for Carlos Mendes Gomes. The man who began his career at Atletico as a 15-year-old, and now finds himself at Morecambe via England’s 10th tier.

“We had to move to England and, at the beginning, I didn’t want to because I had my football back home but I thought, ‘If it’s meant for me to be a footballer, whether it’s in Spain or England, I will be successful’,” he told Sky Sports’ Adam Goodwin in a fascinating interview earlier this season.

Speaking to Sky Sports after his side’s Wembley triumph, he said: “I know how much this means to Morecambe. They are my first professional club and have treated me like a family since I have been here.

“If I was writing a story, it would be this way. It was an unbelievable feeling and I knew that pen would mean so much if I put it in.” Morecambe will play in Sky Bet League One for the 2021/22 season, while Newport remain in League Two. Both divisions start up again on Saturday, August 7.