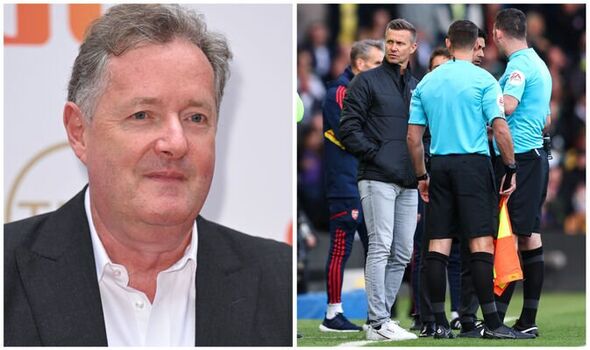 Piers Morgan has hit out at the “VAR hell” that ensued at Elland Road after Arsenal’s Premier League match against Leeds United was suspended due to a technical issue. The outspoken TV presenter took to social media to complain about the issue that delayed proceedings in Yorkshire, after kick-off was suspended by referee due to a loss in communication with the VAR studio at Stockley Park.

Fans both inside the stadium and at home were left bemused by the events that unfolded in Yorkshire as play was halted by referee Chris Kavanagh. The official went over to the touchline with an apparent issue with his microphone after just two minutes of play.

It later emerged that the communication line between the microphones at Elland Road and the VAR station at Stockley Park had been lost due to a temporary power cut, leading to a long delay in proceedings.

Kavanagh had lost all contact with VAR and the goal line technology system, and TV feeds were also affected. The referee then spoke with both sides’ managers as the players attempted to keep themselves warm by passing the ball around on the pitch.

And Morgan, never one to shy away from making his feelings clear during Arsenal matches, was vocal in his criticism of the video review system, describing it as “peak VAR hell” as frustrated Arsenal fans waited for play to resume.

He tweeted to his 7.9 million followers: “FFS. The Leeds/Arsenal game is currently suspended because the referee has lost tech comms contact with an automated system that always gets it wrong anyway. We’ve reached peak VAR hell.”

It is certainly not the first time Morgan has ranted about VAR on social media. Only in September, the 57-year-old accused the controversial review system of “killing football” and aimed a swipe at its advocates.

“VAR is killing football, and all the smart-ass sportswriters & pundits who support it are accomplices to the murder,” he tweeted on September 4.

After a 35-minute delay, the connection issues appeared to have been resolved as play finally got back underway at 2.40pm as both players emerged from the dressing rooms to contest the first half in Yorkshire.

Arsenal were aiming to extend their lead at the top of the table ahead of Manchester City’s trip to Liverpool later in the afternoon, with Mikel Arteta’s side winning eight out of nine games this season.

Leeds, meanwhile, were looking to end a run of five winless matches in the Premier League as Jesse Marsch’s side hover in 12th place, just four points above the relegation zone.

Tuchel and Klopp advise their players to ditch social media