Napoli vs Leicester LIVE: Adam Ounas’ goal sees the Foxes already one down as they aim to progress from Europa League Group C – with all sides still able to qualify for the next round

Leicester travel to Napoli on Thursday night for a crunch final match in Europa League Group C, where all sides could still qualify.

Brendan Rodgers’ side currently top the table on eight points, with Spartak Moscow and Napoli on seven and Legia Warsaw on six, meaning qualification for the knockout stages comes down to tonight.

Several first-team stars including Kelechi Iheanacho, Ademola Lookman and Ayoze Perez are out for the Foxes after testing positive for Covid, while Kalidou Koulibaly, Victor Osimhen, Lorenzo Insigne and Fabian Ruiz are out injured for Napoli.

We will also keep you up-to-date around the grounds, including in the final Champions League game of the group stages between Atalanta and Villarreal, which was delayed from Wednesday due to bad weather, and Lyon vs Rangers as well.

Remember, Leicester will finish top with a win, will qualify with a draw, but may miss out with a loss.

Napoli NEED a win to qualify – and they’ve got it at the moment! 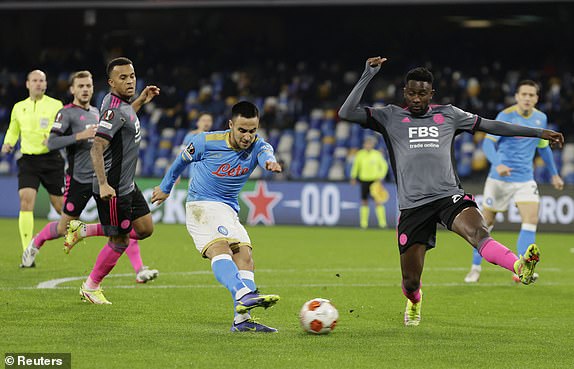 And it’s gone to Napoli! Just one minute and 11 seconds after Castagne should have scored, Napoli break down the other end and grab a goal.

Soyuncu clears against his own man, the ball is worked to Adam Ounas, who strikes it crisply into the far corner!

Oh, that’s so close! Harvey Barnes turns it round the corner beautifully to Dewsbury-Hall, who has loads of space down the left to pick out a low cross.

It comes to Timothy Castagne at the back post, who should score, but his low shot is blocked by a combination of Mario Rui and keeper Alex Meret.

Underway in Lyon too…

Not long to go people!

Yes it is – Atalanta v Villarreal was called off yesterday (Wednesday) due to snowy conditions in Italy. And it’s another winner-takes-all tie…

Manchester United are already through, Young Boys already out. Villarreal are on seven points, Atalanta on six. Simple equation: If Atalanta win in front of their own fans, they’re through. If they don’t, they’re out…

Leicester manager Brendan Rodgers: “It’s one we’re very comfortable on, knowing it’s in our own hands.

“If we win, we top the group, if we don’t lose we qualify. The key is to be positive in our mindset and try to win the game. They are an excellent team but we played really well against them at home.”

Rangers travel to Lyon knowing they’ve pretty much already qualified. The French side are already through as group winners – nothing to play for other than pride.

Rangers would need to lose and Sparta Prague to beat bottom side Brondby, with a six goal swing, to somehow avoid qualifying. Stranger things have happened…

With that in mind, backup keeper Jon McLaughlin comes in, Nathan Patterson replaces James Tavernier at right-back, youngster Scott Wright plays in attack with the experienced Steven Davis and in-form star Joe Aribo on the bench.

Star players like defender Kalidou Koulibaly, on-loan Fulham midfielder Frank Anguissa, Fabian Ruiz, Lorenzo Insigne and striker Victor Osimhen, who scored twice at the King Power in a 2-2 draw in the reverse fixture, all out injured.

Seven first-teamers are out for the game tonight – read Sportsmail’s news story here or below – with the likes of Kelechi Iheanacho, Ayoze Perez and Ademola Lookman out with Covid-19.

It’s pretty much full-strength, with Ryan Bertrand in for Luke Thomas at left-back, and Youri Tielemans coming back from injury in the engine room.

The only starter who’s not normally in the side is midfielder Kiernan Dewsbury-Hall.

In Group C, Leicester are top with eight points, with Spartak Moscow and Napoli on seven and Legia Warsaw on six.

ALL sides could qualify tonight, depending on results – Leicester could go through without a win, but if they win, they guarantee qualification. Tough ask against Napoli though!

In case you don’t want to watch the video – Atalanta line up in a 3-4-1-2 like so: Musso; Toloi, Demiral, Palomino; Hateboer, de Roon, Freuler, Maehle; Pessina; Ilicic, Zapata.

Good evening, one and all. Plenty to play for tonight then, aye?

That one was postponed from yesterday. Hopefully goals galore on the way! Team news dropping imminently…

Napoli v Leicester in Group C. All teams in the group can still qualify. And it all comes down to tonight…