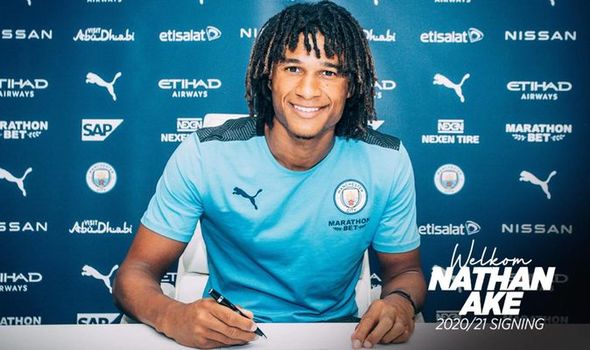 Nathan Ake has revealed he opted to join Manchester City due to Pep Guardiola and the amount of world-class players at the Etihad. The Dutch defender completed his £41m move from Bournemouth to City on Wednesday.

Ake, 25, has penned a five-year deal at the Etihad.

The centre-back was heavily linked with his old club Chelsea before City completed the deal, while Manchester Untied were also credited with interest.

However, Ake says he only had eyes for City.

“City have been the best side in England over the course of the last decade,” he said.

“Coming here is a dream for me. This is a top side full of world-class players. Everywhere you look in this squad there are big names with international pedigree.

“Pep is a manager admired across the world – what he’s done in the game speaks for itself. The success he’s had is unbelievable and the style of football he plays really appeals to me.

“I know I’m going to have to work hard to get into the side, but that’s what I’m here to do. I’ll do whatever I can to make an impact and help the team win silverware.”

City chief Txiki Begiristain added: “Nathan is a quality defender. He was a leader during his time at Bournemouth, and I am so pleased we’ve managed to bring him here.

“He’s strong and quick, and we feel he has the technical and intellectual attributes needed to excel in Pep’s setup.

“Working with this squad, which is full of world-class players, will raise his level, and we are looking forward to seeing what he can achieve here in the coming years.”

Trial of concussion subs in football delayed after Olympics delay