Home » Soccer » Neal Maupay is convinced Everton 'have everything' they need

‘I am someone who needs challenges’: Neal Maupay is convinced Everton ‘have everything’ they need to get ‘back on track’… as the Toffees’ summer signing reveals he left Brighton for ‘something new’

While other players stretch, chatter, listen to music or flick through the match programme, Everton striker Neal Maupay will have his head in a book before Sunday’s kick off against West Ham.

His current read is a French study on psychology translated as “The five wounds that prevent you from being yourself.”

It may sound heavy but for the 26-year-old striker, it’s the perfect way to relax before a big game at Goodison when his new club will be looking for their first win of the season. 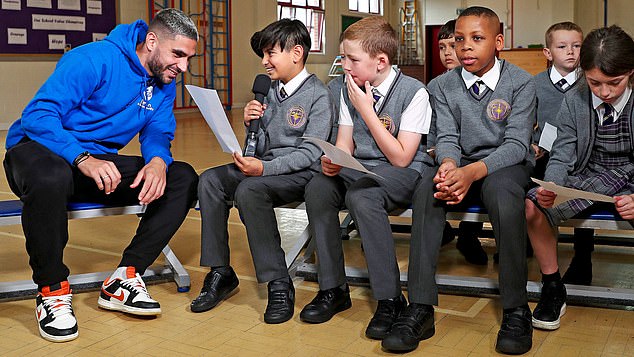 ‘It’s not to motivate myself, it’s just good to have something that makes the time go quick without having to think too much about the game. Two hours is a long time to wait from the time you get to the stadium so I read,’ he explains.

Maupay joined Everton from Brighton for £15million in the final week of the summer transfer window and made his debut a fortnight ago in the goalless Merseyside derby. 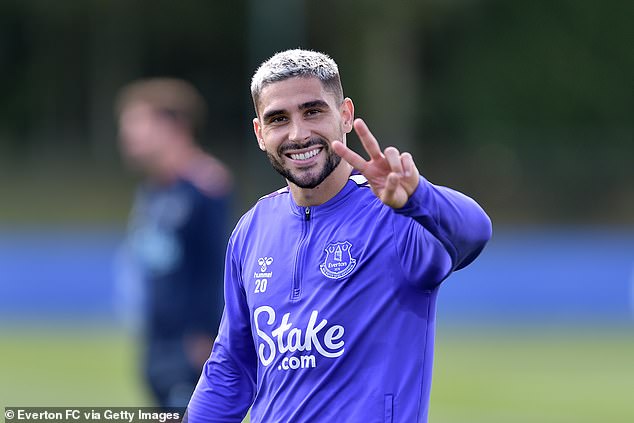 He was signed to give Frank Lampard an extra goalscoring option following the departure of Richarlison, with Dominic Calvert-Lewin only just back from injury.

Maupay, who was born in Versailles but grew up in Nice, can see the Merseysiders following the upward trajectory he experienced at Brighton under Graham Potter.

‘Football changes. Just because you struggle yesterday doesn’t mean that tomorrow won’t be good,’ he says.

‘I’ve been in that process of a new manager and players at Brighton. We had two tough seasons, finishing 15th and 16th, and then the good one (9th). To build takes time.

‘I truly believe that’s the case at Everton. We have everything and I consider it a step up for me, it is one of the biggest clubs in England.

‘We haven’t had any wins yet but I see positives. We were winning at Brentford and Leeds, drew with Liverpool. I think it is only a matter of time before we turn these draws into wins.’

Maupay was Brighton’s top scorer every season he was there, including a sensational overhead kick against Sunday’s opponents last December.

His busy nature will also appeal to Evertonians.

‘I understand the weight of the shirt and how much you have got to fight for it,’ he stresses. ‘That is who I am. When I do something, I do it 100%. 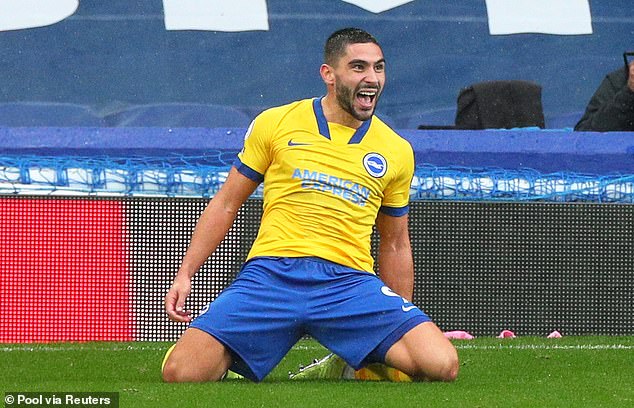 ‘Yeah I run a lot but I will score goals, give assists, fight, do anything I can to help the team.

‘I am someone who needs challenges. I can get bored pretty quickly and after three seasons at Brighton where I feel I had given everything, maybe I needed something new.

‘To play for Everton and help the club get back on track, it is a great challenge.’ 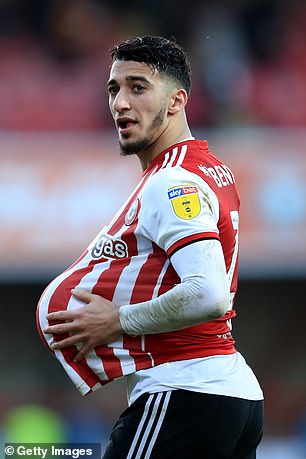 Maupay and Said Benrahma played together at both Nice and Brentford

Ironically, he’ll be reunited with West Hams’s Said Benrahma on Sunday – the pair are good friends having started out together at Nice’s academy and later team-mates with Brentford.

The immediate priority is getting points on the board and Maupay believes he can play with Calvert-Lewin rather than the pair fighting for one position.

‘We can play together because we are completely different in terms of attributes,’ he reasons. ‘He is very tall, strong, in the box a lot whereas my game is more coming short and running in behind.

‘I have played with strikers like him before; Danny Welbeck at Brighton, Ollie Watkins at Brentford. I can play as a No9 or with someone else.’

Maupay saw Potter develop into a manager that has been subsequently been snapped up by Chelsea. Lampard will have his own style but the player has been impressed so far.

‘Every manager is different. From what I have seen so far, Lampard has a very clear idea on how we should play. He is close to his players as well. 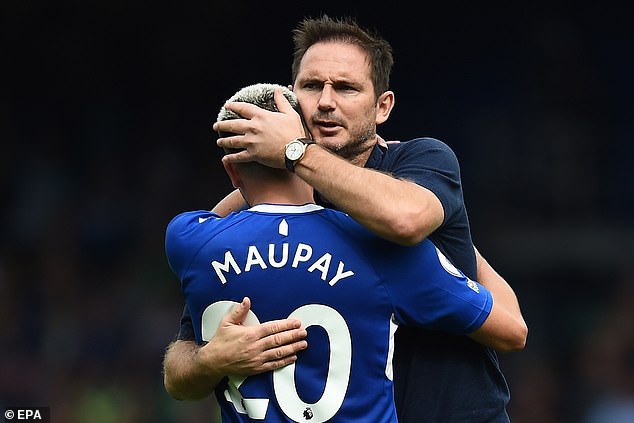 ‘I wasn’t surprised Chelsea wanted Potter because he did a good job at Brighton, especially with a smaller budget and selling players like Ben White.

‘He will need time and the question is will he get it at Chelsea. At clubs like that, you have to be successful straight away. If he gets time, he will do well.’

Everton’s immediate priorities are more modest, they will be happy to avoid another nailbiting relegation battle this season. 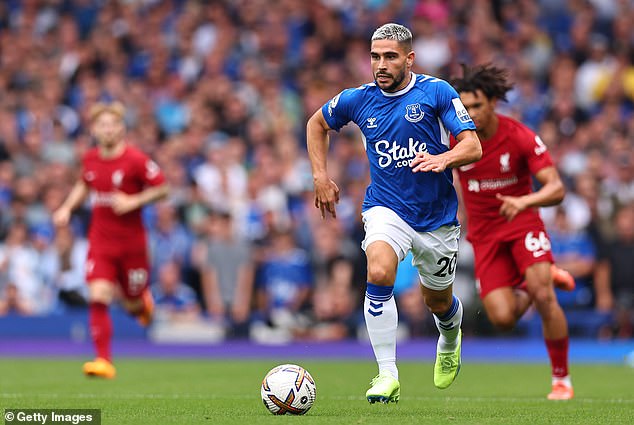 Even so, they are the biggest club Maupay has played for and he is happy to embrace it.

‘The fans come to the stadium or travel every week, the minimum we can do is give them everything,’ he says.

‘If you walk in the street and they say “thank you”, that means a lot because our job isn’t just about playing football – we can also affect people’s lives.’

It’s fitting that as he finishes the interview at St Lawrence’s primary school as part of Everton in the Community’s literacy programme, Maupay turns to see a child’s drawing on the class noticeboard. It’s entitled “Think Positive”. 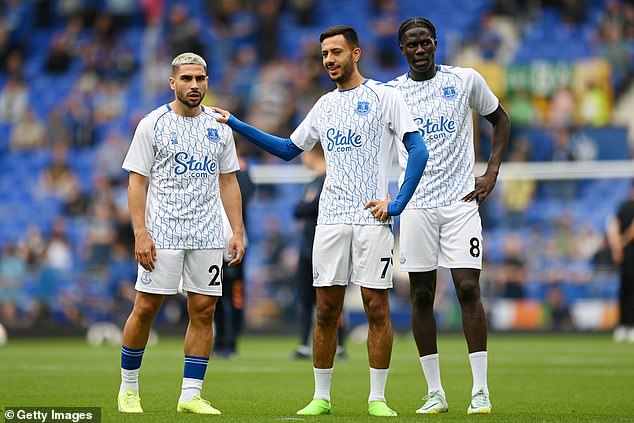 The programme uses the appeal of the Premier League and Everton Football Club to inspire children to learn, be active and develop important life skills.

Everton’s award-winning charity is this year pledging to provide schools in the L4 postcode with free access to the Primary Stars programme.

The gesture is aimed at helping bridge the education equality gap, with the Kirkdale ward of Liverpool in the bottom five percent of deprived areas nationally.

The programme is currently being rolled out in 61 schools across Merseyside, the highest levels of engagement since launching in 2017.