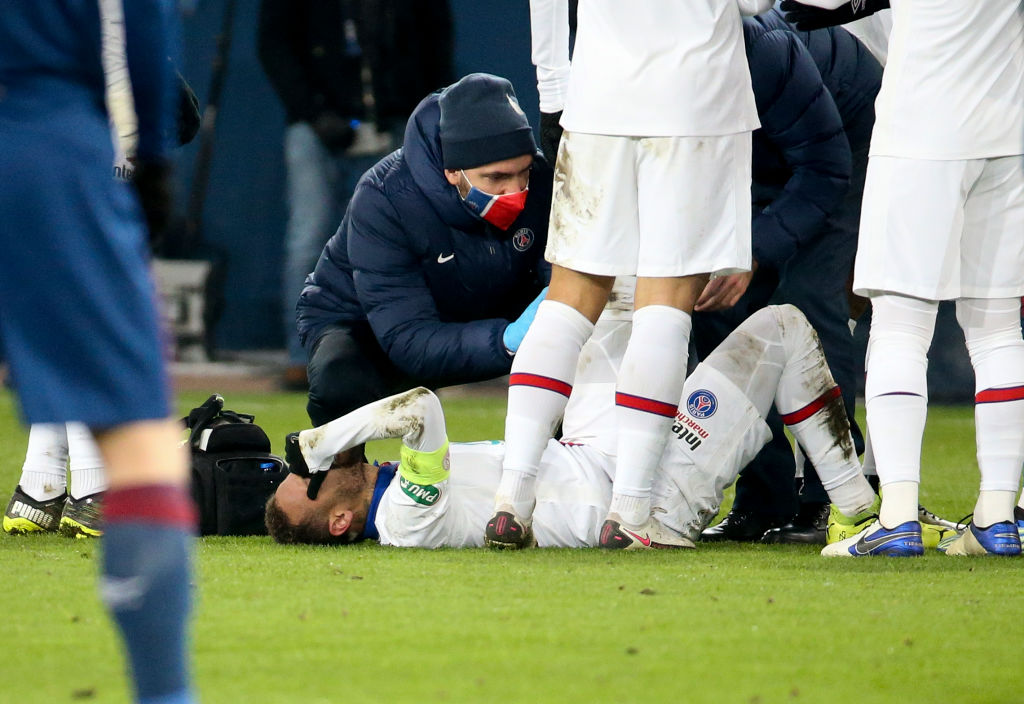 Mauricio Pochettino will have been sweating as Neymar was forced off with an injury in Paris Saint-Germain’s 1-0 win over Caen last night – but Moise Kean appears confident the forward will be fit to face Barcelona in the Champions League round of 16 next week.

Neymar lay in a heap on the ground in some discomfort after a robust challenge from Steeve Yago in the second half as the Ligue 1 champions booked their place in the last 32 of the French Cup.

The 29-year-old Brazil superstar had to be replaced by Kylian Mbappe and was clutching his left thigh as he hobbled off the pitch, with PSG head coach Pochettino confirming after the match that he had sustained an adductor injury.

Asked about the severity of Neymar’s issue, Pochettino said: ‘It’s hard to know now, we’ll see [on Thursday] with the doctor, for the moment it’s hard to say.

‘Will he be available for Barcelona next week? I need more information.

‘Is he affected in the adductors? Yes.’

Pochettino questioned the officiating on show at the Stade Michel d’Ornano and suggested the injury Neymar sustained may have been a direct result of a ‘lack of protection’ from referees.

‘I don’t want to take it out on the way the opponent played and the way Neymar played his game,’ he added.

‘But I just have the feeling that sometimes there is a lack of protection during matches from refereeing. But it’s just a feeling.’

PSG’s goalscorer on the night, Kean, provided a more positive update on Neymar’s fitness and predicted his team-mate would recover in time to face Barca, his former club, next Tuesday.

‘All is well, he is ready,’ Kean told Eurosport.

‘Tomorrow, in training, he will recuperate. He will be ready for the match.’

PSG will definitely be without Angel Di Maria for next week’s heavyweight Champions League last-16 first-leg clash at the Camp Nou.

The former Manchester United and Real Madrid midfielder came off with a thigh problem in PSG’s win at Marseille on Sunday and is expected to miss several games.