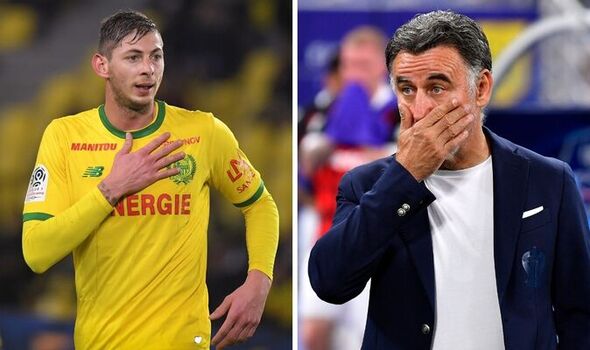 Nice boss Christophe Galtier has erupted at the club’s own supporters following sick chants about the death of Emiliano Sala. Les Aiglons showed grit and determination to come back from 2-0 down against Saint-Etienne on Wednesday night to eventually win 4-2.

The result keeps the club’s Champions League ambitions on track with just two games to play but unfortunately for Nice, the stunning comeback was tarnished by the behaviour of some of their supporters in the stands.

Last weekend, Nice were beaten 1-0 in the final of the Coupe de France by Nantes, the former club of Sala.

And a select group of Nice supporters were evidently bitter over the result, resorting to vile chants directed at the tragic passing of the Argentine striker.

“I have no words to describe what I heard,” he said after the victory.

“One of the first reactions in the dressing room was not chanting or cries of joy, or relief. It was to speak about what the players had heard.

“In the name of my dressing room, of my technical and medical staff, from the players, we would like to offer our apologies to Emiliano Sala’s family and to FC Nantes.”

Galtier wants the supporters responsible for the chants to stay at home in the future because they do not reflect the beliefs of the club and what Nice are striving to achieve.

“You hear a lot of things in stadiums, but these people – and there weren’t just three of them – if they’re not happy, they can come to the training ground and I’ll say the same thing to them,” Galtier said.

“We often say that what we see in stadiums is a reflection of society. If that’s what our society is, we are really in the s***!

“There were also insults towards Mrs [Stephanie] Frappart. She’s not the one that made us lose the final. It’s surreal for me. I have no words. They need to stay at home.

“You cannot hear that in a stadium. If they’re coming to insult the dead, then they can stay at home!”

It’s alleged that the song translated to: “He’s an Argentine, who can’t swim well, Emiliano under the water.”

Sala lost his life on January 21, 2019, when he was on board a light aircraft that disappeared over the channel between Nantes and Cardiff.

The 28-year-old was on his way to seal a dream transfer to the Premier League before the tragedy that shook football to its very core.

Just two weeks ago, Cardiff denied claims they want Nantes to pay £80million in compensation as part of the ongoing legal dispute over the transfer.

Burnley 1-0 Tottenham: Spurs stumble in the race for top four