Manchester United won 2-1 after extra time at Norwich City in the FA Cup on Saturday evening.

Both sides spurned half-chances in the opening 45 minutes, but Odion Ighalo scored from close range shortly into the second half.

Todd Cantwell smashed in an equaliser for Norwich with 15 minutes left, before Timm Klose was shown a late red card and the game went to extra time.

With two minutes left of the added period, Harry Maguire scored the winner to ensure his team will now be in the draw for the semi-finals, which takes place on Sunday, along with the rest of the last-eight matches.

Here are the player ratings from Carrow Road.

Tim Krul – 8. Nothing he could do about the goal. Late double stop to take the game past 90 minutes and a wonder save from Maguire’s header in extra time.

Timm Klose – 4. Needed to do better with the initial cross which led to United’s opener. Red carded in the last minute for an admittedly necessary foul to stop a clear chance for Ighalo.

Jamal Lewis – 6. Decent in build-up play but lacks decision-making in the final third.

Kenny McLean – 6. Tough-tackling, full of running. Didn’t impress when it comes to clever passing into dangerous areas or shooting from range.

Alex Tettey – 5. Game bypassed him to a large extent.

Lukas Rupp – 7. Arguably his most impactful performance since joining on loan in January. Surprising when he was subbed.

Emi Buendia – 6. Hard-working but not one of his most creative performances.

Teemu Pukki – 5. Looks laboured in his movement and lacking that instinctive finishing quality he had at the start of the season. 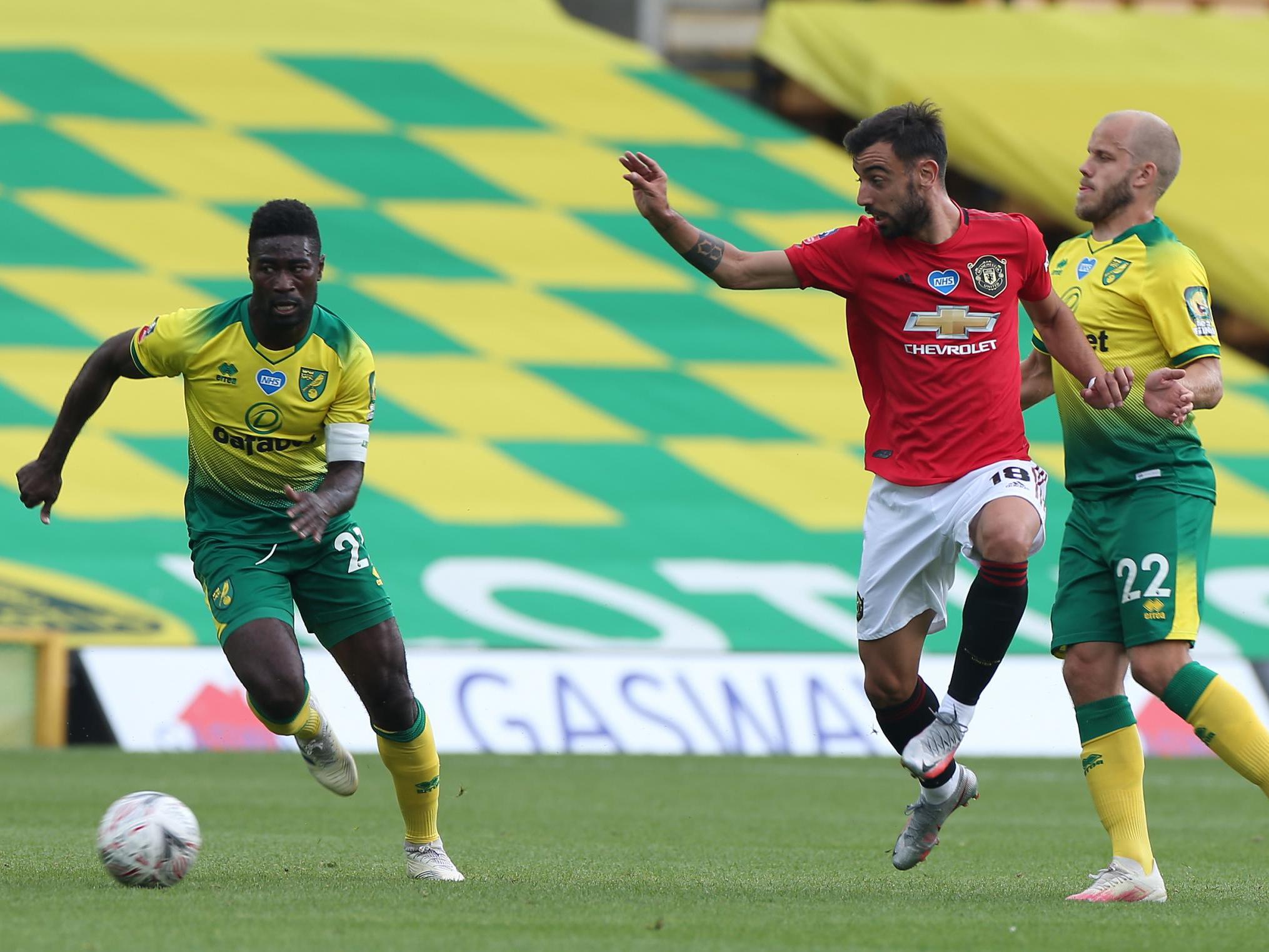 Sergio Romero – 5. Didn’t have much to do until the goal and might feel he could have done more, despite the power of the shot.

Diogo Dalot – 5. Offered largely nothing in attack and didn’t stop Cantwell at the other end of the pitch. No surprise when he was subbed on an hour.

Eric Bailly – 6. Standard performance, several clearances and blocks but also some moments he was beaten for skill.

Harry Maguire – 8. Great block in the first half to stop a goal-bound shot. Scored the winner at the death.

Luke Shaw – 7. Good recovery run when United were caught on the break.

Scott McTominay – 6. Busy but not his best game. His more ambitious passes didn’t always come off.

Juan Mata – 5. Couldn’t get involved. A little weak on the ball.

Bruno Fernandes – 7. Obviously the most talented player from either starting lineup. Not his very best showing but still usually caused problems when on the ball.

Jesse Lingard – 5. One good early moment which ended in a chance missed, but barely contributed afterward.

Odion Ighalo – 7. Does the job he’s there to do. Works hard, gets in dangerous positions, scores when a chance falls his way.

Pujols passes Mays for fifth all time with 661st HR
Recent Posts
This website uses cookies to improve your user experience and to provide you with advertisements that are relevant to your interests. By continuing to browse the site you are agreeing to our use of cookies.Ok