Newcastle's poor habit of conceding goals early in halves came back to bite them again as Melbourne Victory fought back to draw 1-1 at McDonald Jones Stadium on Saturday night. 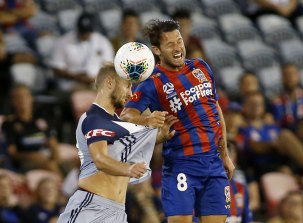 The Jets were in control in the first half of the round 20 A-League contest and led 1-0, but Victory caught the Newcastle defence napping in the 49th minute to equalise.

Tim Hoogland crossed to find captain Ola Toivonen at the back post and the Swede buried his header despite the presence of three Jets defenders.

Victory, backing up from a mid-week 1-0 Asian Champions League loss to FC Seoul in Korea, took their winless streak in the A-League to six games but they stayed ahead of Newcastle by two points.

The Jets dominated early, but they looked headed for a frustrating night after striker Abdiel Arroyo twice found the back of the net without success.

The Panamanian toed in a ball from Angus Thurgate in the eighth minute but the pass had deflected off referee Alireza Faghani.

Arroyo then headed in a Dimi Petratos cross in the 16th minute but the goal was disallowed for offside.

The breakthrough came in the 24th minute when Petratos was in behind again and he squared the ball to Roy O'Donovan, who hit it into the underside of the crossbar from close range.

Play continued after the ball rebounded into play until a VAR check confirmed O'Donovan's strike had crossed the goal line.

O'Donovan also forced a diving save from Lawrence Thomas in first-half stoppage time to cap a stellar opening from Newcastle, who had 71 per cent possession at the break.

Irish striker Wes Hoolahan made his long-awaited A-League debut for Newcastle in the 62nd minute and he almost gave his side a chance to go ahead two minutes later.

He played a clever through ball to Matt Millar, who was felled close to goal but appeals for a penalty were ignored, heightening the frustrations for new Jets coach Carl Robinson.