Football Federation Australia's senior referee advisor has come to the defence of the officials overseeing Sunday's A-League grand final, suggesting a controversial decision not to award Melbourne City a goal was correct.

Harrison Delbridge's first-half strike against Sydney FC was ruled out after his teammate Lachlan Wales was deemed to be obstructing the view of the Sky Blues' goalkeeper Andrew Redmayne while in an offside position despite not making any contact with the ball. Sydney won the match 1-0 after extra-time with a chested goal from fullback Rhyan Grant breaking the deadlock. 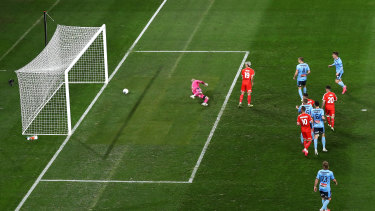 Melbourne City’s Harrison Delbridge shoots past Andrew Redmayne. It was ruled Lachlan Wales, centre, was in an offside position and was obstructing the view of Redmayne.Credit:Getty

Another controversial decision not to award Sydney FC a penalty was deemed to be a closer call. Sydney striker Adam Le Fondre fell inside the box after coming into contact with City defender Curtis Good in the 28th minute. Delovski admitted there was clear contact but was less certain Good's nudge was forceful enough to bring down Le Fondre.

"It’s a tough decision and you have a split second to make that decision. For us, we thought it was normal contact," Delovski said. "Absolutely, no question there was contact but we would regard this as normal contact."

A handful of fans complained on social media Sydney FC's Rhyan Grant should have been sent-off for his goal celebration. Grant was already on a yellow card when he slotted the winner with his chest and celebrated by lifting his shirt for a few seconds. In some cases, removing a jersey can result in a booking however Delovski suggested it would be require the harshest of interpretation of that law to give Grant a second booking for celebrating after scoring an extra-time goal in a grand final.