Manchester United midfielder Paul Pogba will leave the club if a deal is completed for Donny van de Beek, reckons former Liverpool midfielder Danny Murphy. Van de Beek is set to join United from Ajax for a fee of £40million. And Murphy cannot see how the 23-year-old can fit into the same starting XI as Pogba and Bruno Fernandes.

Pogba has a year left on his United contract but the club have the option to extend it for a further 12 months.

The Frenchman missed the majority of last season due to an ankle injury before returning to be a regular starter under Ole Gunnar Solskjaer following lockdown.

Pogba’s agent Mino Raiola has recently stated that his client will be staying at Old Trafford beyond this summer.

But Murphy is not convinced and thinks the 27-year-old will be on his way if Van de Beek arrives. 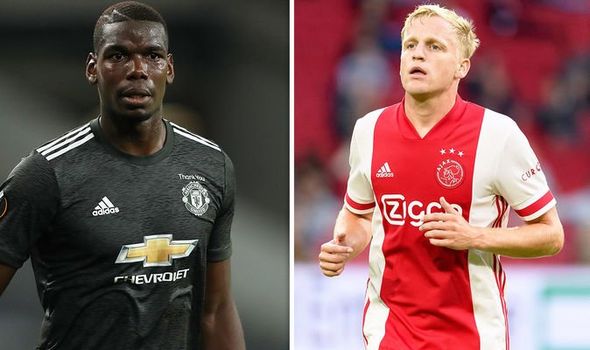 “[Van de Beek’s] not a defensive midfielder as such is he?” Murphy said on talkSPORT.

“He likes to get in the box and score a goal, we’ve seen that, he’s technically good, he’s an all-round kind of energetic midfielder, box-to-box type.

“Playing with Fernandes and Pogba, do you really think that?

“Do you know what I think? I think that Pogba could be off. That signing to me says Pogba’s off.

Van de Beek was a key part of the Ajax side that reached the Champions League final just under 18 months ago.

The Holland international was linked with La Liga giants Real Madrid and Barcelona.

But ex-Dutch star Rafael van der Vaart believes a move to United will be good for both parties.

“He has played excellent for Ajax. And Manchester United really need this kind of player in their team.

“This transfer is fantastic for us [Dutch people] too. We are all going to follow him now. This move is so deserved.”

James 'set to be offered wage increase' this summer by United

ON THE ROAD: Better days ahead for Coventry and Sunderland