PSG v Man City: Neymar ready to do talking on the pitch

Pep Guardiola has hailed Neymar ahead of Manchester City’s Champions League semi-final first leg against Paris Saint-Germain. City face PSG at the Parc des Princes on Wednesday evening, with Guardiola’s side set to go up against Neymar and Kylian Mbappe.

The duo helped the French giants overcome defending champions Bayern Munich on away goals in the quarter-finals and are sure to be the main threat for Guardiola’s side as they try to win a first Champions League trophy.

Mbappe has been passed fit after being forced off in the closing stages of PSG’s 3-1 win over Metz on Saturday with a thigh complaint, meaning Mauricio Pochettino can field the 22-year-old alongside Neymar tomorrow.

Neymar previously played for Barcelona, but his arrival in Spain from Brazilian side Santos in June 2013 came after Guardiola had already moved on following a hugely successful four-year spell in charge of the Catalan side.

Although Guardiola has never managed the 29-year-old, he has been in the opposition dug-out, having first faced Neymar when he was playing for Santos against Barcelona in the Club World Cup in 2011. 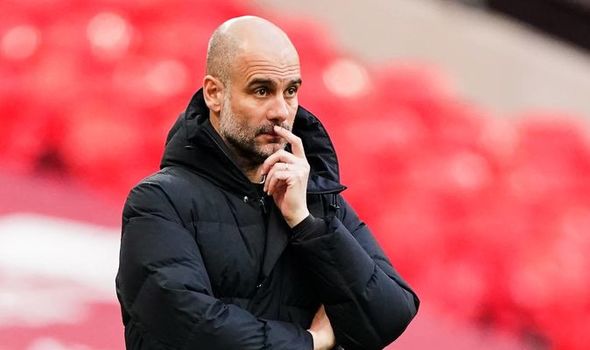 “I remember against Santos, I said this was the king of Santos and all the players were open mouthed: ‘Oh my god, what a player,'” Guardiola explained to reporters on Tuesday.

“A joy to watch as a spectator, he has Brazil on his shoulders, the number 10, it’s not easy to wear.

“I’m pretty sure if he’d stayed in Barca they would have won two or three more Champions Leagues. With Neymar, [Lionel] Messi and [Luis] Suarez, the best three I’ve seen.”

Messi, Neymar and Suarez formed the Barcelona front three between Suarez’s arrival from Liverpool in 2014 and Neymar’s departure to PSG in 2017.

Neymar then moved to PSG from Barca for a world-record £198million fee and has formed a similarly formidable partnership with Mbappe.

Folarin Balogun pinpoints how two Arsenal stars have inspired him

The strikers helped PSG reach the Champions League final last season under Thomas Tuchel where they lost 1-0 to Bayern Munich, thanks to a goal from Kingsley Coman.

Having narrowly overcome Bayern in the previous round they are hoping to go one better this season under Pochettino.

Manchester City come into the semi-final full of confidence after beating Tottenham 1-0 on Sunday to win the Carabao Cup, but Guardiola knows the threat Mbappe and Neymar poses to his side.

“Always I believe the quality of these players, they have too much,” Guardiola said.

“I tried to sleep well last night and that was when I was not thinking of them. Incredible top players, their quality.

“We are ready to try to stop them, defend as a team, play good football and try to score goals.”