Home » Pep Guardiola on Sergio Aguero: What a goal, what a player, what a man

Aguero netted only his second Premier League goal of the season as he fired Man City ahead at Selhurst Park, before Ferran Torres doubled the lead 83 seconds later.

The win means Man City need just two more points to seal the Premier League title, but they could be crowned champions on Sunday if Manchester United lose at home to Liverpool.

Aguero’s famous last-gasp winner against QPR in 2012 secured City their maiden Premier League title, and Guardiola was pleased the Argentine could make a telling contribution as his side closed in on their fifth Premier League crown.

“Today again, at 0-0, the pass from Mendy was exceptional and after that, the control, the action was class. He’s shown again what he has shown all his career, many times – what a goal, what a player, what a man.

“I’m incredibly delighted that he’s back. He spent lots of time injured and in the last week, he has trained really well and he’s another weapon that we have next Tuesday for our semi-final.”

Aguero is set to leave City at the end of the season after 10 years with the club, and Guardiola said he hoped the striker would see out his career at the highest level.

He added: “He’s an absolutely top legend, extraordinary player, behaving as the most humble and nicest human being and it’s not easy to find that. That’s why I love him as a man.

“Another player in his situation with what he has done, he could create conflict, he could create a difficult situation… but when one guy is beloved like he is for all ours fans, it is not just for scoring the goals, it’s because it is something that the people realise that you cannot hide away as a person. 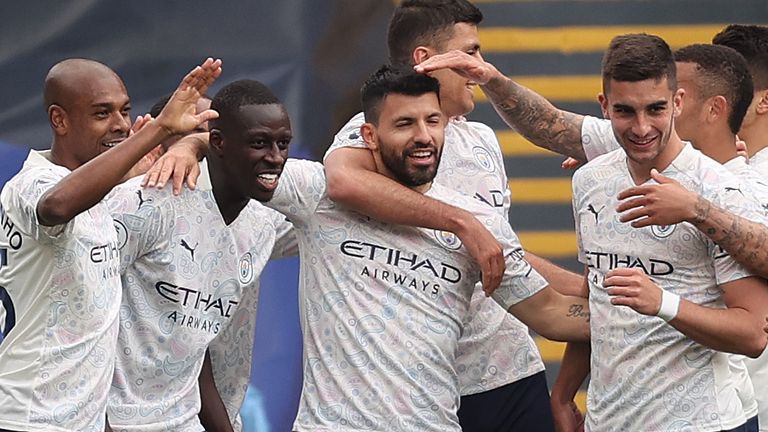 “This season, we took a difficult decision, one of the toughest ones too, especially because he was injured for a long time, but this club next season needs to make other steps and to maintain this level for a longer time. But what he has done in this club, will remain forever and we want to finish in the best way possible.

“He is going to help us in the Champions League and the Premier League and that’s why it’s not easy to find a player like him with the amount of talent, numbers, achievements and being like he is as a human being.

“Hopefully he can go in the place he wants to be and play the last years of his career in a high level. I never will forget it, he helped me a lot and it’s a pleasure to work with him.” Aguero could be hitting form at just the right time, with Man City facing Paris Saint-Germain in the Champions League semi-final second leg on Tuesday.

They already hold a 2-1 advantage from the first leg and Aguero has declared himself ready to fire City into the final.

He told BT Sport: “Always I’m ready. I’m feeling good, my knee is so good. I just wait for the opportunity to play, like today. If I don’t play it doesn’t matter. I want to be with the team-mates. Of course every player wants to play, but we’ll see.”

On his performance against Crystal Palace, the striker added: “Finally I could play, I’m so happy. It was a long time that I hadn’t played 90 minutes. The goal was good because maybe we can win the Premier League.

“Always [Benjamin] Mendy tries to pass to me. All I needed in the box was one touch or two touches. Finally I got the goal. I’m so happy about that.

Pep: We will see about tomorrow’s game

Guardiola confirmed he will watch Sunday’s clash between Manchester United and Liverpool with the Spaniard wanting to wrap up the title “as soon as possible”.

Guardiola said of the game: “Tomorrow, I will take a look at the game and what happens, happens but the most important thing is not the fact you need them to be champions and the game is in our hands. If we don’t win it tomorrow, we will try to win it next week.

When asked if Guardiola would prefer to win the title on Sunday or against Chelsea next weekend, the City manager had a simple answer: “As soon as possible.”

Hodgson: Man City one of the best team I’ve faced

After Saturday’s result, Crystal Palace manager Roy Hodgson says he may need to reconsider who the best team he has ever coached against is during a career which started back in 1976.

He said: “Watching them as close as I have done these last four years in the league, and seeing the way Pep has worked with this team, I have got to say I don’t think I have ever come across a team that good.

“If you did really twist my arm and give me one team that might give them a good game, I’d say the Ajax team of Johan Cruyff in 1987, with the Van Bastens and Bergkamps.

“I have often said in the past that was the toughest encounter I faced, Malmo vs Ajax, and in the future I might have to change my mind and put Man City up there instead.”