Has he just got a one way ticket? Mauricio Pochettino arrives in Manchester with PSG amid speculation United want him to become their new boss IMMEDIATELY – with Zinedine Zidane favourite to take the reins in Paris

Mauricio Pochettino has landed in Manchester ahead of Paris Saint-Germain’s Champions League clash with City on Wednesday night.

The Argentine has heavily been linked with the Manchester United hotseat since Ole Gunnar Solskjaer’s sacking on Sunday and has arrived in the city for the Ligue 1 giants’ European clash at the Etihad Stadium.

Pochettino waved to the cameras as he and his PSG team touched down at Manchester Airport on Tuesday.

United have appointed Michael Carrick as their caretaker boss with their search for Solskjaer’s permanent successor ongoing.

Sportsmail revealed on Monday that Pochettino is interested in moving to Old Trafford this season.

It’s understood that the former Tottenham boss is willing to leave PSG now because he is unhappy in the French capital.

Pochettino is living in a hotel while his family remain in London, and is said to be frustrated at managing a dressing-room with big egos like Lionel Messi, Neymar and Kylian Mbappe.

The PSG boss was one of the candidates for the United job when Solskjaer took over from Jose Mourinho in December 2018 and is still admired by the United hierarchy. 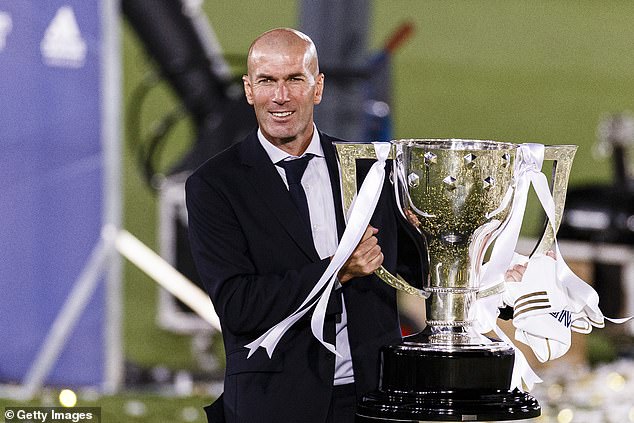 Should Pochettino swap PSG for United, Zinedine Zidane is favourite to replace him in Paris

The feeling inside PSG’s dressing room is that Zidane is poised to step in in the near future, according to Marca.

A compromise could be reached with Pochettino heading to United and Zidane – still a hero in his homeland – taking the reins in Paris. The duo may even be on the move shortly.

In fact, the report claims that PSG’s stars are already privately discussing the possibility of Zidane managing the club over the coming weeks.

Pochettino will address the media later today ahead of PSG’s Champions League Group A clash at City.