Report and highlights from the Sky Bet Championship clash between Preston and Derby County at Deepdale as goals from Ben Whiteman, Ched Evans and Ryan Ledson earned an emphatic win for North End on Tuesday night

Derby’s chances of Championship survival were dealt another blow after they suffered a fourth straight loss with a 3-0 defeat away at Preston.

Wayne Rooney’s side are just four points above the bottom three, with relegation rivals Rotherham having three games in hand on the Rams, after goals from Ben Whiteman, Ched Evans and Ryan Ledson edged Preston up to 14th.

Neither side created much in a scrappy opening quarter of an hour at Deepdale with Alan Browne’s scuffed effort drifting harmlessly wide of David Marshall’s post. 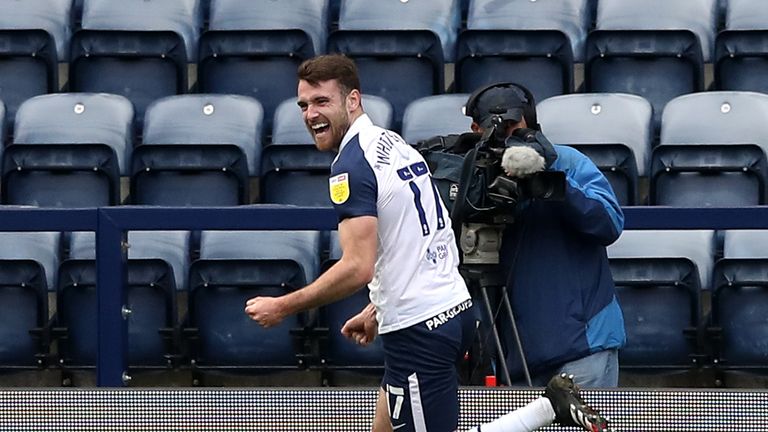 However, the Preston skipper reacted swiftly to play a key role in their opening goal after 18 minutes. The Republic of Ireland international burst into the box from midfield and his dinked cross was nodded in by a stooping Whiteman.

Frankie McAvoy’s side continued to edge it before the break with Ledson flicking a header just over the bar, as Derby struggled to get a grip on the hosts.

Rooney’s visitors did improve after the restart, however, as he brought on Martyn Waghorn and Lee Buchanan to add some freshness to his side.

Waghorn did almost have an instant impact as his close-range strike was bravely blocked by Andrew Hughes before a sprawling Daniel Iversen superbly denied Matt Clarke from the follow-up in the 53rd minute.

Derby continued to carry the greater threat in the final half hour as they looked to haul themselves back into the game with Clarke lashing Buchanan’s neat cut-back just over the top of Iversen’s bar.

However, despite Derby enjoying more of the ball late on, their lack of cutting edge was ruthlessly punished by Preston after 72 minutes.

Brad Potts’ burst into the box was not tracked by two Derby defenders and with Marshall only able to parry his cross back into the six-yard box, Evans was on hand to poke home and double Preston’s advantage.

But that goal did not dent Derby’s confidence in the final stages as they fought on to try and force an unlikely route back into the game.

Tom Lawrence’s long-range strike forced another smart stop from Iversen with nine minutes to go but North End were in no mood to let their lead slip as Ledson made the game safe with two minutes to go.

His whipped free-kick caught a deflection inside the box, which wrong footed the unlucky Marshall, to complete a miserable night for Rooney and Derby in Lancashire.