Someone asked Gareth Bale a few days ago whether playing for Wales ever felt like work. The look on his face told you that there really had been no need to pose the question.

‘Certain days are obviously more difficult than others,’ he grinned. ‘But playing for Wales never gets tiresome.’

Harry Redknapp once said that Bale would rather head back over the River Severn than out to the sun when given time off at Tottenham. You only had to watch a few of the open training sessions here this week to appreciate that for him we are entering a be-all and end-all. 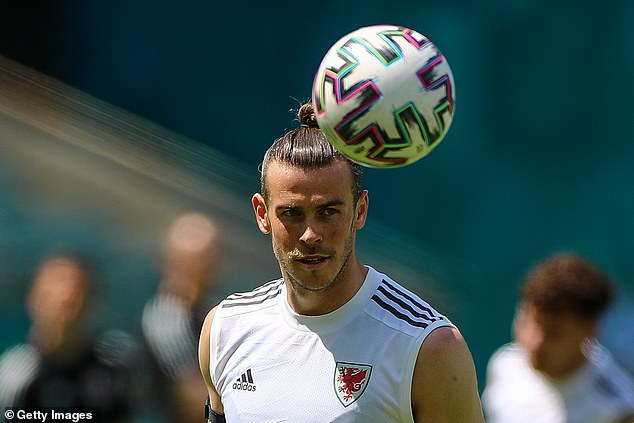 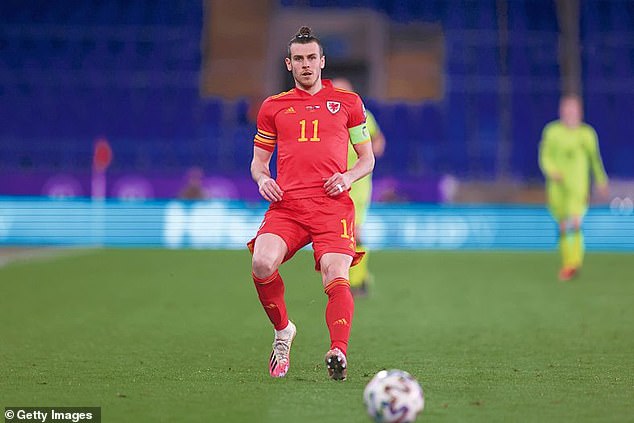 But it is complicated for Wales this time. The entire narrative of the build-up to a challenging Euro 2020 group has revolved around 2016 and though no one has ventured to say so, that extraordinary run to the semi-final in France is clearly a ghost on the wall. The eight remaining members of the class of 2016 in the squad have been reluctant to dwell on something almost impossibly difficult to live up to.

The mood music has seemed different, too. In 2016, Wales had been at their Dinard base for two days when Bale asked Ian Gwyn Hughes, the Football Association of Wales’ head of public affairs, when he wanted him to do press duties. ‘Straight away?’ And so he became a powerful proselytiser for the team.

This week, Bale did not appear until yesterday’s mandatory UEFA press conference. Relentless questions about his future and Carlo Ancelotti’s return to Real Madrid do not help. 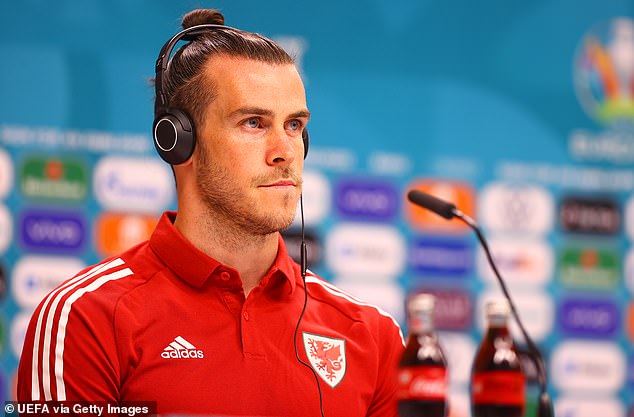 The way Wales have been dumped into Turkey’s backyard — facing a hostile crowd when facing that nation next week, before playing Italy in Rome — is a scandal. The FAW tabled two extremely strong bids to be a host city like Scotland (who were unable to fulfil fixtures) and England. But the matter playing most on Welsh minds is whether Bale, 32 next month, can be the same match-winner he was in France.

The analysis of Wales back home has included Jose Mourinho talking down the fact that Bale’s goal every 80.78 minutes in the Premier League last season was the division’s best ratio by a distance. These goals did not come in the big games, Mourinho protested.

By some statistical measures, Bale is not quite at his 2016 levels, with 3.7 shots per 90 minutes last season compared with 4.2 for Real Madrid five years ago and 1.4 chances created against 2.5 back in 2016, though other numbers suggest greater involvement in games. He attempted and completed more dribbles, tackled more and was on the ball more in 2020-21 than 2015-16, Opta data shows. 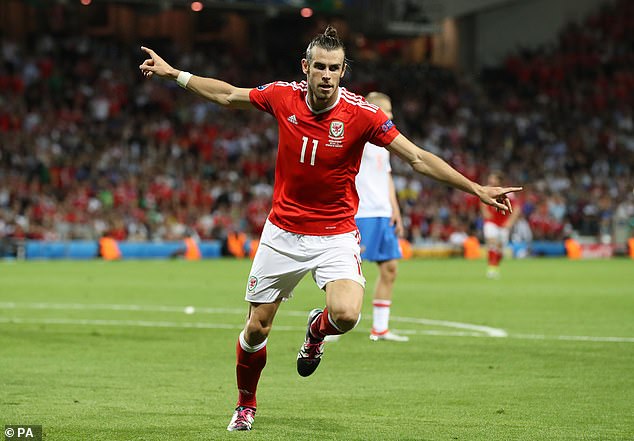 To the naked eye, the raw speed is perhaps not quite what it was. But Brian Flynn, the former Wales Under 21 manager and talent-spotter who blooded this golden generation of Wales players, says the question of pace is immaterial where Bale is concerned.

‘It doesn’t matter,’ he says. ‘Bale doesn’t need pace because he gets into better positions now. You will find that two men close him down, drawing players away, so the opposition are down to eight men on the rest of the pitch. That creates space for others.’

Flynn and coaches David Williams and Alan Curtis did not see Bale as a natural wide player at all, but as a more central attacking forward, when they first worked with him in the Welsh youth side.

‘He was playing as a left back at Southampton at the time,’ Flynn says. ‘We persuaded him and Southampton that he was better as a forward. I remember him playing for us there against Cyprus in a friendly at Port Talbot in 2006. Devastating. That’s when we really knew what we’d got.’ 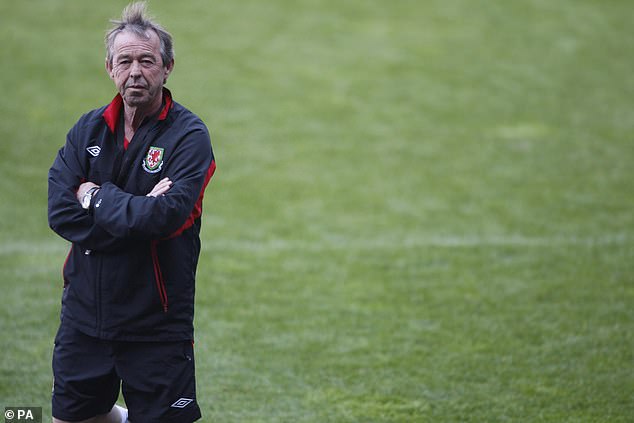 Brian Flynn, Bale’s Wales Under-21s coach, did not see him as a natural wide player

Bale, who did not seem like captain material back then, is actually a better player than he was in 2016, Flynn believes. ‘Better because his reading of the game is better,’ he says. ‘He knows how to implement a game plan.’

Team-mates also see an evolution in his game since 2016. ‘I think everyone has changed over the last five or six years,’ says Ben Davies, another of the 2016 squad. ‘He spends half his career being man-marked or having two v one against him. You get teams who try to mark you out of the game and you have to adapt. You don’t get all the free space and time on the ball.

‘It’s about every time he gets those moments being as good and as clinical as he can. He shows that. You give him a moment and there are not many players, in two or three seconds on the ball, who can create or score like he does.’ 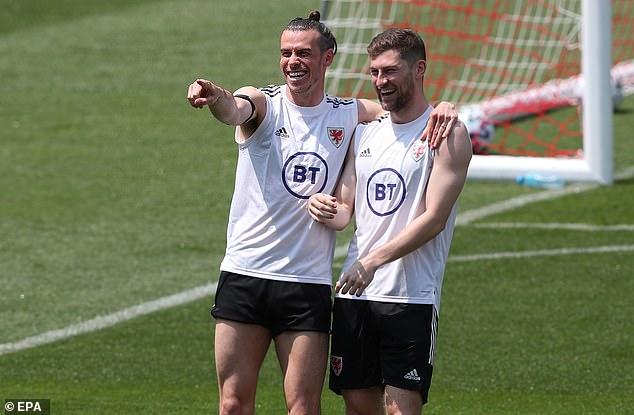 As a forward whose prime asset was pace, Dean Saunders feels there are two clues to a player’s game being slightly past its peak — having slightly less desire for the fight against the defender you are up against, and experiencing a slight drop off in pace. ‘That’s when the fight’s gone and the candle’s not burning the same,’ he says.

The next few weeks will tell us if Bale really is at peak speed, believes Saunders, a talkSPORT analyst on Wales. But the former Liverpool player says the obsession with Bale’s pace obscures his broader tactical value. He is scathing about Mourinho’s analysis.

The worry with this Wales team is a lack of game time. Joe Allen has not played a league match since March 20 and yet will be asked to get up the pitch in 25˚C heat and back down it again to deter Xherdan Shaqiri, the prime Swiss threat. That is why Joe Morrell, who has been struggling to make the Luton team, should start alongside Allen on Saturday, providing legs and lungs for two of them.

Bale has started only five club games in three months and not scored for Wales in 11 games. ‘I haven’t scored for a while but made maybe six or seven assists in that time,’ he said on Friday. ‘So I’m still contributing. I’m not worried.’ 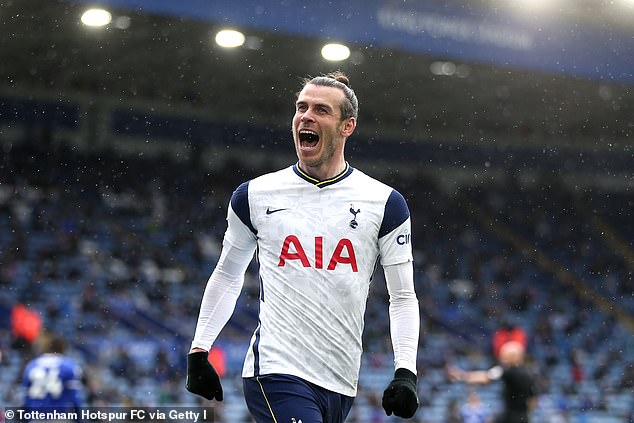 Bale struggled for minutes at Tottenham last term, as did many other Wales stars for their clubs

The young ones in this team are the pace merchants, now. Players such as Daniel James, who are witnessing the captain that Flynn never anticipated Bale becoming. ‘He will say more stuff in training,’ James reflects. ‘He kind of leaves us alone on the pitch and if anything is said it will be at half-time. He might just say, “You should’ve passed the ball then”.’

Ultimately, it is the immense emotional resonance that comes with leading his country out in a tournament for the first time which could see the so-called Prince of Wales’ touch the heights once more. He has not rehearsed what he will say in any team huddle tonight, preferring to go with what ‘will come naturally’, but there is huge anticipation.

‘To be leading your country out into a major tournament,’ he said yesterday. ‘That’s going to be one of the highlights of my career.’