Paris: French police released Paris Saint-Germain midfielder Aminata Diallo from custody Thursday without charge but are still investigating an attack on one of her teammates, prosecutors said.

Diallo and one other person were detained for questioning Wednesday about an attack on teammate Kheira Hamraoui last week, according to the Versailles prosecutor’s office. Both were released Thursday pending further investigation. The second person was not identified. 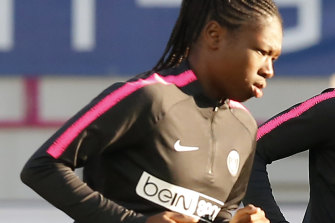 PSG’s Aminata Diallo has been released by French authorities.Credit:AP

No charges have been filed but the investigation will continue, the prosecutor’s office said. No other details were released.

Hamraoui and Diallo, both midfielders, play for PSG and France’s national team.

PSG condemned the attack and said the club will work with Versailles police to clarify what happened.

Several French media reports said Hamraoui was attacked following an evening out with Diallo and another teammate, who was not identified. Broadcaster BFM TV reported that Diallo was driving them back when several people wearing masks attacked, and that Hamraoui was hit several times with a metal bar and needed stitches to her hands and legs.

The incident and the accusations of personal rivalry and professional jealousy immediately evoked memories of the 1994 assault on figure skater Nancy Kerrigan, who was attacked at that year’s US championships in a plot orchestrated by the ex-husband of rival Tonya Harding. Kerrigan was assaulted after a practice session by a man who hit her repeatedly in the legs with a police baton.

Diallo started in midfield for PSG on Tuesday (Wednesday AEDT) in a 4-0 win over Real Madrid in the group stage of the Champions League.

Hamraoui rejoined PSG in the off-season from Barcelona, who beat PSG in the Champions League semi-finals last season. She previously played for PSG from 2012-16, the year Diallo joined from Guingamp.