Rangers 2-0 Kilmarnock: Kemar Roofe nets on first start for club but has name MISSPELLED as ‘Roffe’ in embarrassing kit blunder with Leeds target Ryan Kent also scoring for Steven Gerrard’s side in win

So that’s how you handle a dose of big-money transfer speculation. As Alfredo Morelos sulked at home, Ryan Kent shrugged off confirmation of a rejected offer from Leeds United to light up a win that saw Rangers pull three points clear at the top of the Premiership table.

Players do not react to transfer talk in uniform fashion.

For every Borna Barisic, who continues to improve in line with his rising profile and links with a potential move, there is a Morelos who Steven Gerrard admits has had his head turned by the summer saga that saw a reported £16million bid from Lille turned down. 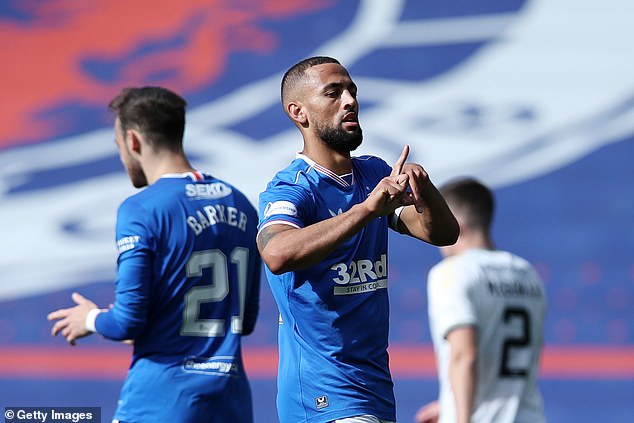 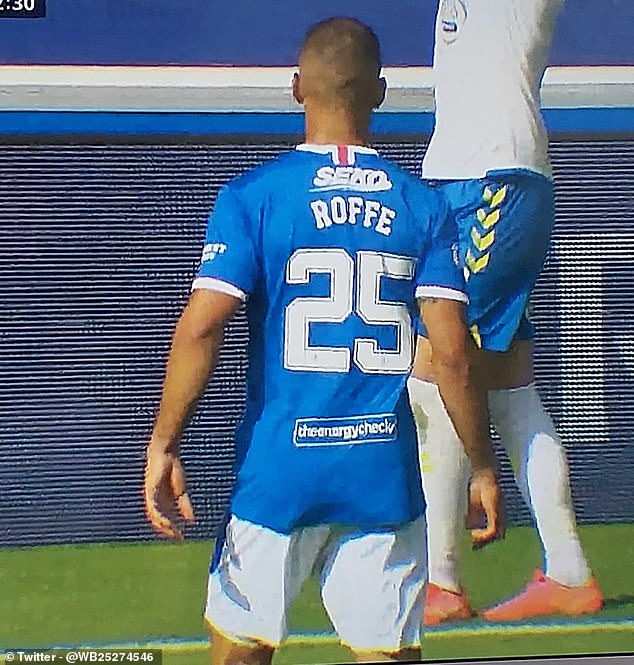 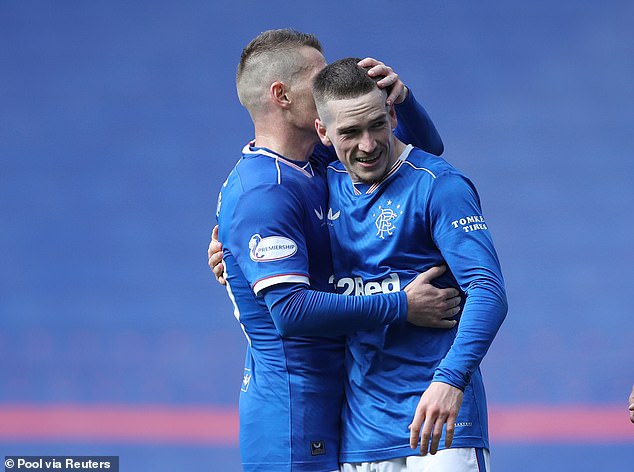 And so it was interesting to see how Kent would react in the face of confirmation that he too had been the subject of a rejected bid from Premier League newcomers Leeds United.

Purchased for £7m from Liverpool a year ago, the price tag for the winger would now appear to have stretched to eight figures but there was no questioning his hunger in this game as, operating off the left flank, he was a persistent irritant to the Kilmarnock defence and helped himself to the clinching goal.

Morelos wasn’t even on the bench and a split now seems desirable for both parties, if not quite an inevitability given the French side’s ‘pause’ in their pursuit of the striker.

If this preview to life without the Colombian lacked the drama routinely served up by Rangers’ leading man, it also afforded Kemar Roofe an opportunity to step into his shooting boots.

Making his first start for the club following a £3.5m transfer from Anderlecht, Roofe helped himself to a simple goal that should accelerate his bedding-in process.

In total Gerrard made four changes from the team that toiled at Livingston last weekend with Scott Arfield, Glen Kamara and Ianis Hagi all starting on the bench.

Gerrard has operated almost exclusively with one striker during his two-year tenure but he found a way to squeeze Roofe and fellow newcomer Cedric Itten into the team, with the latter starting on the right of the attack.

The central role behind Roofe went to Brandon Barker, with midfielder Steven Davis completing the changes.

Having looked alert to hold Kent’s first, early shot from distance, Killie keeper Danny Rogers was bright and decisive to deny the winger again as he raced on to James Tavernier’s through ball.

The pair’s duel escalated at the end of a shape-shifting move that saw Kent chop this way and that before dispatching a powerful shot towards the top corner. Rogers’ athleticism saved the day for the visitors on that occasion. 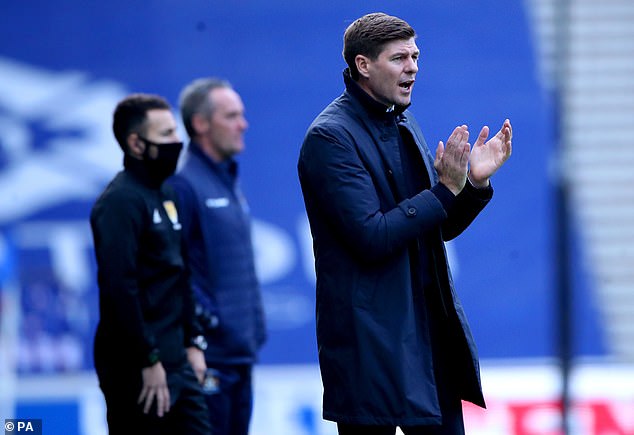 Otherwise, Rangers were hogging the ball without creating too much and were reliant on a gift for the best chance of the first half.

Kirk Broadfoot failed to get purchase or height on his clearing header from Ryan Jack’s ball forward and instead presented Itten with the chance to score his first goal at Ibrox.

Perhaps too eager to impress, the Swiss lashed his shot well over the bar.

Alex Dyer also had a striking issue to address. Despite giving Celtic’s Christopher Jullien a bruising afternoon at Rugby Park on week two, Nicke Kabamba had failed to score in four matches.

He dropped out, to be replaced by Eamon Brophy.

Up against Helander, Brophy ran hard but had little feed on, clipping his solitary chance wide after taking a calm touch. 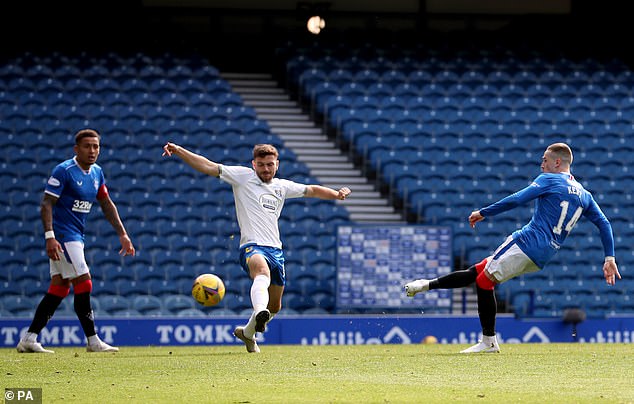 A Helander block from a Broadfoot header was the only other Killie moment of note in the opening period, one which ended with Jack remonstrating with Kevin Clancy over the referee’s earlier decision not to award a penalty for hand-ball against Stuart Findlay.

Rangers raised their game after the break. First Roofe hit the post with a header from Barisic’s cross and then the same combination carved out the opening goal.

Kent was again involved and this time he was rewarded for playing it simple instead of electing for a shot or a drop of the shoulder on the edge of the box.

Instead he rolled the ball into Barisic’s feet and the Croatian’s low cross picked out Roofe for the tap-in.

Dyer sent for Kabamba on the hour but his shift was to prove no more productive than Brophy’s as Rangers squeezed the game high up the pitch. 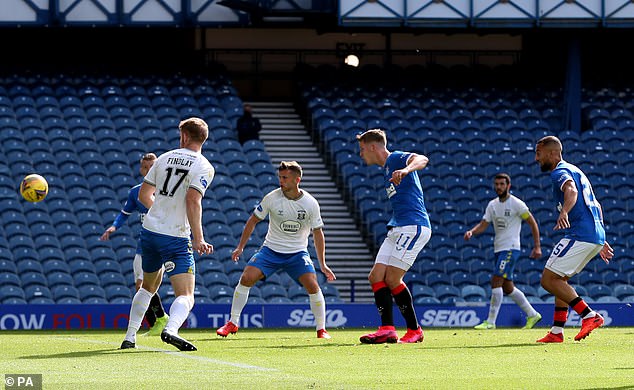 Kent was the deserved scorer of the second, displaying composure to set himself as James Tavernier’s powerful drive deflected out off Aaron Tshibola and then shaping his shot inside Roger’s left-hand post.

After moving to a more central role in the wake of Gerrard’s decision to substitute Roofe, Itten arced a decent shot wide while subs Arfield and Greg Stewart also came close as the game drifted to its conclusion.

A word too for the Rangers defence. One more clean sheet was required to see the current defence exceed the old Iron Curtain’s achievement of four consecutive shut-outs at the start of season 1949-50.

The historians can squabble over the merits of Connor Goldson and Helander versus Willie Woodburn and Jock ‘Tiger’ Shaw but the goalkeeper could have been sitting with Morelos on the sofa, such was the comfort of his afternoon.