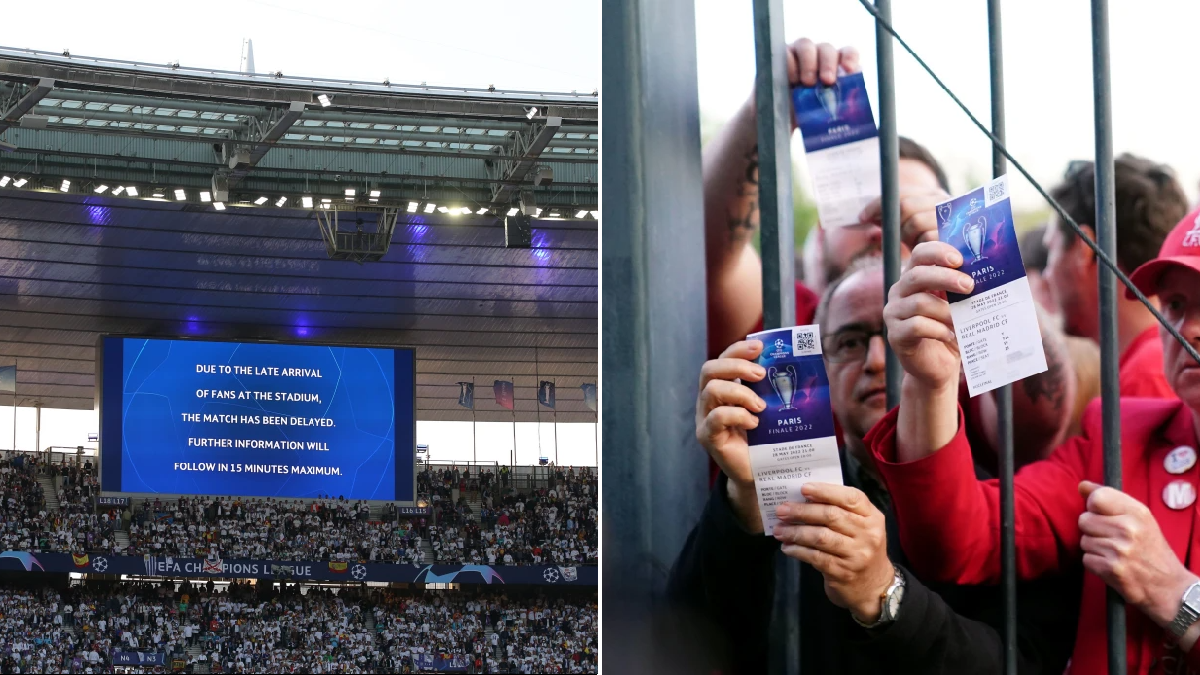 A Real Madrid fan delivered an explosive testimony to the French senate in Paris on Tuesday afternoon which proved that some of the country’s most powerful authorities have been spreading mistruths about what happened at the UEFA Champions League final.

Football fans who attended May’s fixture between Los Blancos and Liverpool at the Stade de France were tear gassed by French riot police, forced into dangerous crushes outside the stadium, and mugged by gangs of local delinquents in a shameful night for European football and governing body UEFA.

In the aftermath, French officials including interior minister Gérald Darmanin, sports minister Amélie Oudéa-Castéra and chief of Paris police Didier Lallement have all attempted to pin the blame on ‘the English’ Liverpool supporters for the carnage, claiming that fans arrived late, in mass numbers without tickets, and too drunken without providing a single piece of evidence to substantiate their claims.

Before fans spoken on Tuesday, UEFA’s CEO of event Martin Kallen repeated the French state’s claims that ticketless fans caused the issues at European football’s showpiece event, again without providing a scrap evidence to back up his version of events.

By contrast, Liverpool supporters have been posting masses of video evidence online which show severe organisational and security failures on the French authorities’ behalf. On Tuesday, disabled supporter Ted Morris gave a harrowing account in the senate of the trauma suffered by fans, which one senator described as ‘apocalyptic.’

Senate inquiry co-chairman Francois-Noel Buffet even preceded the fans’ testimony by saying: ‘English football fans were not the cause of these problems. Let’s say that clearly. They showed great control in chaotic surroundings.’

One the key arguments the French authorities have used to try to blame Liverpool supporters is that there were no problems at the Real Madrid end of the stadium. That notion was completely torn apart by Real Madrid fan Emilio Dumas, who delivered a rip-roaring riposte in perfect French.

Dumas introduced himself to the senate, the equivalent of the United Kingdom’s House of Lords, by explaining that he is a half-Spanish and half-French football fan who has been a Real Madrid member for almost thirty years.

‘I have been to two other Champions League finals in Paris,’ Dumas explained. ‘Eight in total. I have never lived anything like happened this time. I do not understand the minister of the interior Gérald Darmanin’s version of events at all.’

Dumas’ testimony reinforced the arguments made by Liverpool supporters since the fixture took place, and the speeches made by Morris and the Spirit of Shankly fans’ union chairman Joe Blott in the senate on Tuesday.

The 59-year-old sales manager also took exception to the game being held in Saint-Denis, an area with high rates of violent crime, and said that local young adults had picked pockets, caused problems with entering the stadium, and sexually harassed female fans.

‘Why have this game at the Stade de France?,’ Dumas asked. ‘Why have it in an area as dangerous as Saint-Denis? I was terrified for myself and my friends. I feel shame for France and its reputation around the world. This is an unacceptable thing to have happened in a country like France.

‘There was no signage or information for accessing the stadium. There was a clear lack of organisation already. For the elderly and disabled there was a huge problem at the turnstiles. It was very dangerous. The queue at Gate N was about 300 metres long. There were local young adults mixed in with us. They were still thieving and being aggressive.’

Dumas also supported Liverpool fans’ testimony about violence after the match, when local gangs attacked and stole from fans in the absence of any police presence.

‘Many young pickpockets robbed from Real Madrid fans,’ said Dumas. ‘The father of a friend had his phone stolen for example. There were many young locals at our fan park who were not Real Madrid fans. Some female fans and young women were attacked and harassed by them.

‘Our team won but we were more worried than happy. There was danger outside after the match. I have never seen such a passive and inactive attitude from a police force as there was after the match at the Stade de France.’

The French senate’s investigation is continuing. UEFA’s conclusions are set to be revealed in September, though Kallen’s highly controversial testimony will do little to placate the worries of football fans across Europe about a cover up from the authorities.

What can Chelsea can expect from Swedish outfit Malmo?