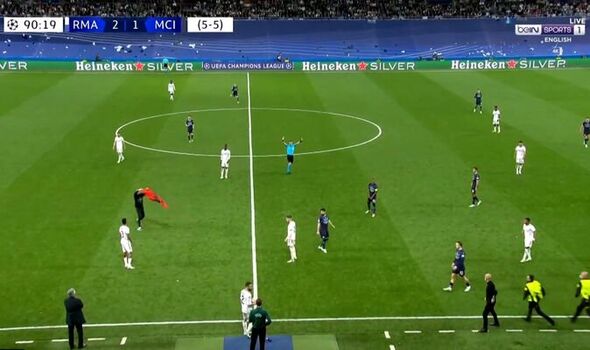 Manchester City’s dramatic Champions League clash with Real Madrid was momentarily disrupted by a pitch invader as BT viewers watched on with bemusement. The broadcaster’s feed joined extra-time of the classic European tie late and just before an individual made their way into the pitch.

BT’s advert break quickly cut to extra-time around 25 seconds in, with the ball in the centre of the pitch. A fan was then seen making their way into the Bernabeu pitch as referee Daniele Orsato halted play.

The individual appeared to be holding an Albanian flag as they ran towards the centre circle. They were quickly apprehended by stewards and led away.

It continued a manic set of events in Spain. City had been cruising into the final, which would have set up an all-Premier League showdown with Liverpool.

Riyad Mahrez’s second-half goal put Pep Guardiola’s side 5-3 ahead in the tie. However, Real substitute Rodrygo incredibly scored a brace within two minutes as the second period ticked into six minutes of added-time.

That levelled the aggregate score at five apiece and set up a tense period of extra-time. But there was further drama as BT joined the additional period late and viewers were welcomed by a pitch invasion.

Madrid then went ahead for the first time in the tie. Karim Benzema, who had been quiet throughout, dispatched a penalty after Ruben Dias’ conceded a spot-kick.