El Clasico? Not exactly. Real Madrid’s newly-formed women’s team are still not yet a match for Barcelona

When it comes to setting up a women’s team, Real Madrid have made even Manchester United look dynamic.

It is just three years since the Old Trafford board finally accepted the lack of such a side was embarrassing, yet a mere three months since a team which could genuinely be called ‘Real Madrid Femenino’ stepped on to a pitch.

In 2019 the club appropriated a local women’s side, Club Deportivo Tacon, and kitted them out in white strip. The team retained the Tacon name and did not carry the Real emblem last season. They lost 9-1 and 6-0 to Barcelona. El Clasico? Not exactly. 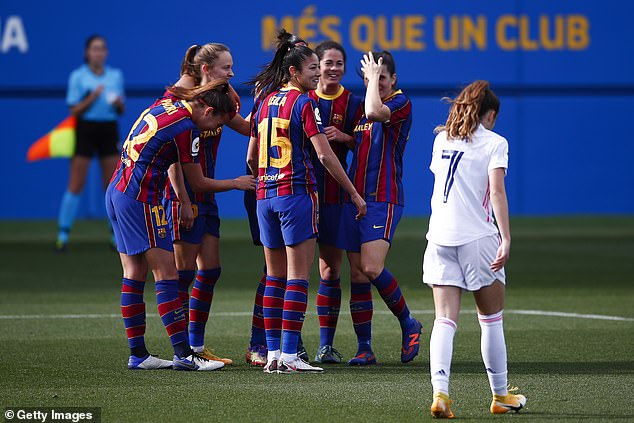 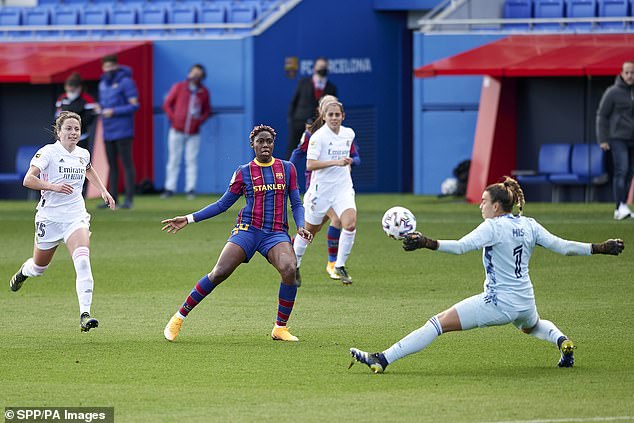 It’s a measure of how desperate Spain — and women’s football — is for a competitive Real Madrid team that the Marca newspaper’s two-page preview of yesterday’s match at the Johan Cruyff Stadium predicted a ‘heavyweight duel’.

A profile of Maite Oroz, Real’s Spanish midfielder, 22, declared: ‘The professor has a plan.’

The headline writers were getting a little ahead of themselves. This match constituted progress, in that Real — the Tacon name is now dispensed with — achieved their best scoreline yet against a Barca side two decades in the making. In October, they lost 4-0. But it required a questionable second-half penalty, converted by 20-year-old Olga Carmona, to go one better this time. 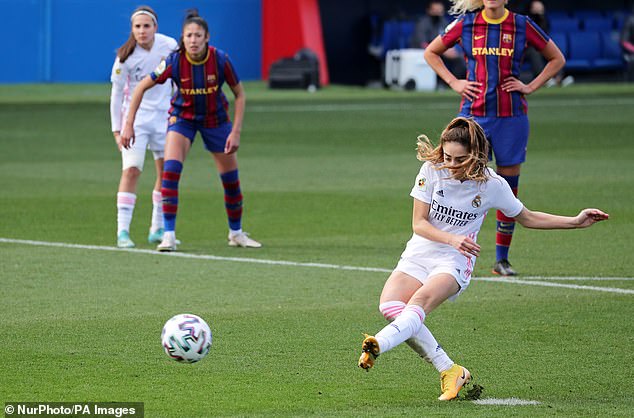 Madrid was not built in a day. For those yearning for a competitive Real — including Barca, because a Clasico with intensity and tension is needed to draw audiences — there were grounds for optimism.

Real scrapped hard from the start. They rallied, having been pummelled in a first half which left them 3-0 behind. Brazilian midfielder Thaisa squeezed space and won possession high up. This allowed Swede Sofia Jakobsson to create a threat down the left flank. It was she who won the penalty after chasing a ball over the top.

But the scoreline barely reflected the Catalans’ true superiority and the individual with most questions to answer was Real coach David Aznar.

1. Arsenal played just one match in January, after a waterlogged pitch put paid to this weekend’s home game against Aston Villa at Borehamwood. They now face Manchester City and Chelsea in the space of three days. Taken with the fact that the written press were not even permitted to cover their home games at the start of the season, surely it’s time to find a home ground befitting an ambitious, elite team?

2. The abuse faced by Marcus Rashford on social media at the weekend emanates from a dismal, intellectually-challenged minority. Chelsea’s Fran Kirby encapsulated in just 14 words the action Twitter and Instagram should be taking. ‘Every. Social. Media. Account. Should. Have. To. Be. Approved. By. Some. Type. Of. ID.’ Is it really so difficult?

3. It was impressive to see the players in Spain’s Primera make their own kind of protest against the Spanish FA this weekend. They’re indignant about failures, as they see it, to introduce an adequate system of protocols and testing within the top flight professional division, which the federation runs. The Real Madrid and Barcelona players stood with arms folded in protest before their Clasico.

4. It is devastating on every level that Manchester United’s Tobin Heath will be out for up to three months with an ankle injury sustained in training. The American has been arguably the finest of this season’s imports.

5. The weekend’s WSL results — comfortable wins for the Manchester teams and Chelsea — reinforced the status quo at the top. It’s going to need some challenge to depose Chelsea, unbeaten in a League record 33 games. The eye-catching result was bottom club Bristol City’s first win of the season, 3-0 at home to Brighton. That could be the start of a renewed battle to avoid relegation.

Many were surprised to see him kept on. Real had invested heavily in players for Tacon last season, including Thaisa and Jakobsson, yet Aznar’s team finished in the bottom half of the Primera Division, with the worst defensive record. The perilously high defensive line he employed against a Barcelona side who had secured maximum points, scored 69 goals and conceded just two in their previous 12 league games, was unfathomable. So, too, the omission of his best striker, Kosovare Asllani.

From the start, Barca were running into vast space and scoring at will. The first of the four goals was genuine class — captain Alexia Putellas easing into space just outside the area and dispatching a left-foot shot which Misa Rodriguez’s palm could not keep out.

The rest were gifts. Nigerian Asisat Oshoala’s shot after a break down the left was palmed to Jenni Hermoso, who tapped in. Norwegian Caroline Graham Hansen attacked free space on the opposite flank to create an equally elementary tap-in for the rapid Oshoala. 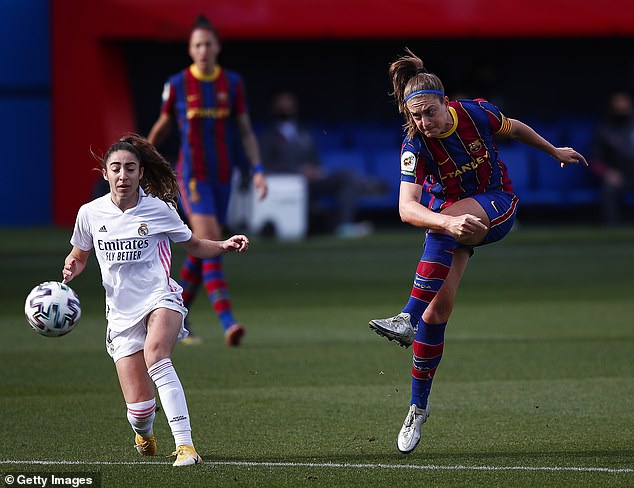 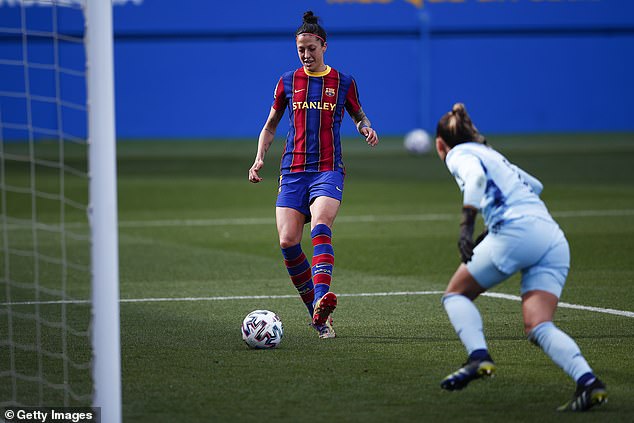 Real’s plight worsened when goalkeeper Rodriguez was sent off for using her gloves to repel Oshoala 10 yards outside her area. But the game was already up by then. Oshoala had deflected a fourth in after the wonderfully gifted Hansen drove into the box.

Investment is not so difficult when you’re Barca. The club announced yesterday they will be taking legal action against El Mundo for publishing details of Lionel Messi’s new contract. He’ll earn £491.7million over four seasons, according to that newspaper report.

The challenge is how to win the Champions League when you’re so far ahead of all the domestic competition.

The title is already a formality but the scrap for the remaining two Champions League slots is not. Atletico Madrid, Real Madrid and a third city club, Madrid CFF, are level with Levante on 34 points, behind Barcelona on 39. It’s not yet the Spanish football hierarchy as we’ve come to know it. 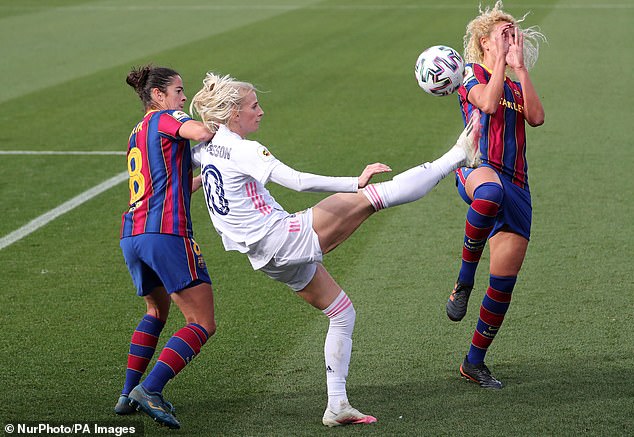 Real Madrid fought hard throughout, with Sofia Jakobsson (centre) a threat on the left flank

Dane Scarlett is having to cope with high praise at Tottenham