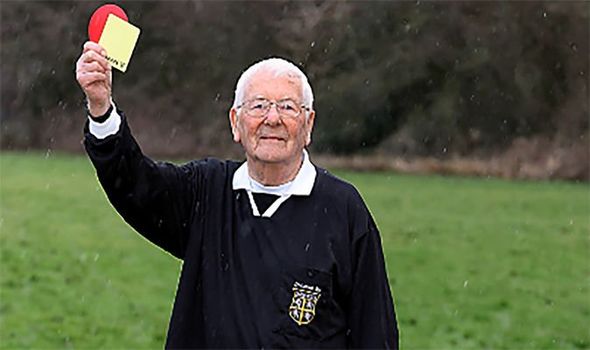 Terry Farley, 88, officiated his first game in 1952 and has travelled the world to oversee matches.

He said: “I’m sad to be retiring, especially when it’s from something I’ve been involved in for seven decades.

“It’s a difficult thing to do but I have to be realistic.

“I’m stopping because I can’t go on forever and ever.”

Great-grandfather Terry, who was awarded an MBE in 2011, took up refereeing as an 18-year-old.

He started out in local divisions before his career took off in 1965 when he refereed his first Football League match. Then, in 1971, he officiated at St James’ Park for Newcastle’s home match against Liverpool.

Terry, from Newton Aycliffe, County Durham, said: “I was due to run the line. When I arrived at the ground, one of the other assistants told me I would be refereeing it. But I didn’t believe him.

“He turned around and said the referee was already on the treatment table for a neck injury, so I did end up doing it myself.”

Terry was still refereeing games at Durham University up until the pandemic.

The former driving instructor, a father of two who lives with wife Marina, refereed his final Football League game in 1981.