Former Matilda Moya Dodd has welcomed any investigation into Lisa De Vanna’s allegations of a toxic culture inside women’s football, but hit out at “retrograde stereotypes” around lesbians in sport in subsequent public commentary.

The recently retired De Vanna, one of Australia’s most prolific strikers, outlined her claims in a News Corp report earlier this week, which prompted Football Australia to set up an independent system for historical complaints that will be run by Sport Integrity Australia. 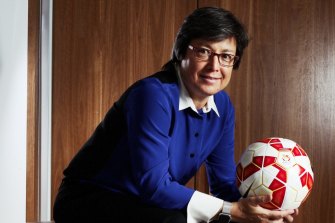 Moya Dodd played 24 times for Australia across the 1980s and 90s before a career in football administration that saw her serve on the board of Football Australia and the executive committee of FIFA.Credit:Peter Braig

Dodd, who played 24 times for Australia across the 1980s and 90s before a career in football administration that saw her serve on the board of Football Australia and the executive committee of FIFA, was speaking on a virtual panel run by Pride in Sport ahead of International Lesbian Day on Friday.

She was not speaking directly about De Vanna’s experiences, which she refused to comment on and said should be heard and assessed by SIA.

But Dodd took particular issue around the notion of “grooming” – which De Vanna referred to but did not provide any specific examples of in the News Corp report – and how it has been discussed since in various reports and on social media.

“It takes us back to a time when it was normal to be afraid of gay people, being around gay people, to sort of demonise them as predators, people who you couldn’t leave your kids with,” Dodd said on Thursday.

“A sense of there’s something improper about having partners who play on the same team, that people become gay because they’re groomed. I mean, grooming has a very specific meaning, which is not the same as some kids playing sport in a team together. That word’s got to be used with great care.

“I think there are some real concerns in the community that the reporting and especially the social media commentary that then follows from all of this, which I’m sure you can imagine, is something that takes us back to a time when fear of gay people was normalised. 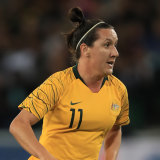 Former Matildas star Lisa De Vanna alleges she was a victim of sexual harassment, grooming and bullying throughout her career.Credit:Getty

“And of course there’s a word for that … but that’s now part of a culture war, which if you use that word, you’re almost firing the first shot in a culture war, and you’ll get a lot of words back if you do that, I think.

“We have to be able to have grown up, sensible conversations about these issues without resorting to these old stereotypes of predatory lesbians or women’s sport as some sort of festering pot of immorality that turns people bad [or] gay … these are very retrograde stereotypes which shouldn’t have any place in modern sports reporting.”

Dodd’s remarks were echoed earlier on Thursday by Women Onside, an advocacy body for women in football.

Chair Maria Berry also lauded FA and SIA’s independent complaints process but said there was “underlying subtext in some commentary that borders on homophobic”.

“Women Onside recognises that these are complex issues that need multifaceted solutions,” Berry said. “These solutions will be achieved through respectful and nuanced discussion. We would encourage all stakeholders to engage constructively and sensitively on these issues.”

De Vanna has not yet indicated if she intends on bringing a formal complaint to SIA, and questions to that end from the Herald to people close to her have not elicited a response.

The Herald has spoken to several players, who did not wish to be identified publicly, who have been part of the Matildas set-up for the past 15 years and were shocked to hear of the allegations raised by De Vanna. Privately, none had experienced or witnessed the behaviour the former striker alleged and were unaware of any form of harassment or bullying De Vanna experienced in 2001 while with the Young Matildas.

One of De Vanna’s former teammates, Joey Peters, denied the national team or sport had any major cultural problems, but warned that all of professional sport had an issue when it came to putting young women into “pressure cooker” high-performance environments.

Peters, who played 110 times for the Matildas and retired in 2009, said she would prefer to be celebrating De Vanna’s glittering career, having recently reached out to her and Football Australia over the prospect of a farewell match. 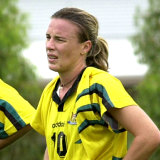 “In terms of what the players are trying to do, from a historical perspective, no,” Peters said when asked if the Matildas had a cultural problem.

“I’m talking about the next level – of course there is an issue because it’s driven from the top. These girls and athletes are expected to be top role models, to give 120 per cent for the game and the jersey and don’t have a personal life.

“With women’s sport, they get the girls in earlier, and that’s the problem – the age. We have to look off the field now and say what is best for a young person who is 15 or 16, debuting for the Matildas? What’s she dealing with?

“It’s a pressure cooker, a small bubble you’re put into, you’re expected to give your whole life to a particular sport from when you’re a child. I’m a big advocate for youth and child development being separate to the adult game. You need to be mature to not only go through the rigours of what it’s about physically but also mentally, emotionally. There’s a bigger issue for me – can we talk about sport needing to have a holistic approach which puts the person first?”