FK RFS 0-2 Hearts: Jambos have lift off in the Conference League as Lawrence Shankland’s penalty just before half-time and Alan Forrest’s late finish earn them victory away in Latvia

The opponents may have been limited. The modest venue here at 7000-capacity Skonto Stadium may have been a million miles from the continent’s major footballing cathedrals.

But Hearts beating RFS Riga was still a very welcome sight indeed as the Tynecastle side recorded the first group stage victory for a Scottish club in Europe this season.

What a timely fillip this was for Robbie Neilson’s side, who had lost six of their seven previous game amid a run of injuries that resurfaced here in the Latvian capital with an early recurrence of defender Craig Halkett’s hamstring troubles. 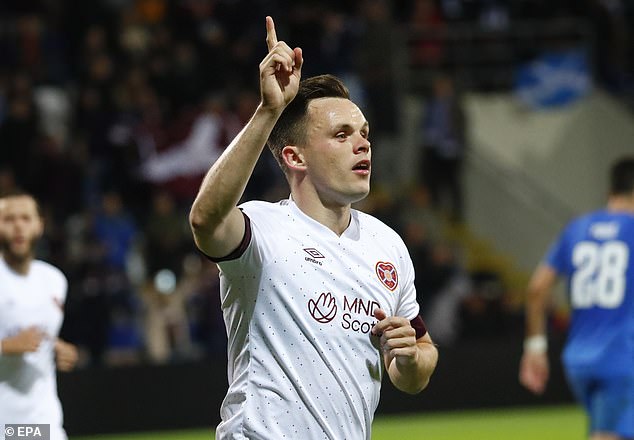 But a stylishly struck first-half penalty by striker Lawrence Shankland and a last gasp goal by substitute Alan Forrest ensured victory in the Gorgie side’s first European group stage away match since losing 3-0 to Feyenoord in October 2004.

Last season’s Scottish Premiership third placed side were well worthy of their win but they still had to rely on the typical brilliance of Craig Gordon.

The outstanding Scotland goalkeeper made two stunning saves on the cusp of half time to keep his side on course to secure three potentially priceless points.

Hearts now sit second in Europa Conference League Group A after Fiorentina lost 3-0 to Istanbul Basaksehir in Turkey after surprisingly drawing 1-1 at home to Riga on match day one.

That sets up a mouth-watering double header next for Hearts against the Serie A side at Tynecastle on October 6 before the return leg in Florence a week later.

With Riga’s own LNK Sports Parks ground falling well short of UEFA requirements, the Latvian champions moved all of their European matches to nearby Skonto Stadium.

Aberdeen fans have painful memories of his venue as Willie Miller side drew 0-0 here 18 years ago this month before exiting the UEFA Cup on away goals following a 1-1 draw at Pittodrie.

And on a Latvian evening so chilly the temperatures were, well, Baltic, Hearts were so nearly caught cold within the opening two minutes.

Brazilian forward Santana Deocleciano turned past Michael Smith before launching a shot at goal. The ball sped past Gordon but smacked the junction of the post and bar in a major early let-off. 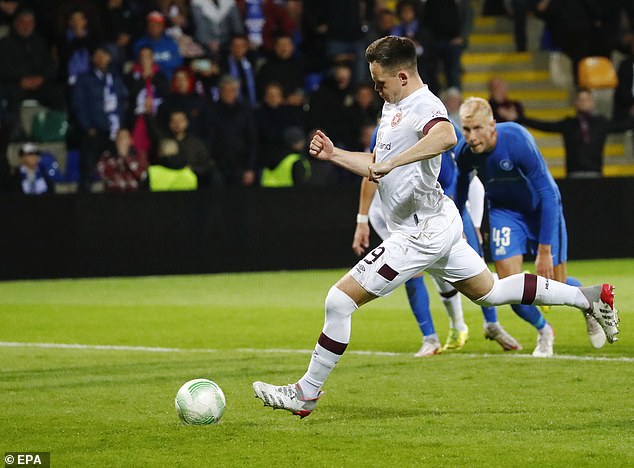 With the visitors stung into action, Josh Ginnelly hit a strike from the edge of the box that was turned behind for a corner by the fingertips of Riga keeper Pavels Steinbors.

And there was a real scare for Riga when Stephen Kingsley’s great delivery from the left was misjudged by Steinbors and the ball dropped to Ginnelly six yards out. The Heart attacker should have scored but could not get a strong enough contact on the ball.

By now, Hearts had grown into the game and the Scots were enjoying 65 per cent of possession. Yet they were lacking a killer final ball to create chances for Shankland.

And there was a major setback when Halkett picked up what looked like a recurrence of the hamstring injury that had kept him sidelined for the past four weeks. 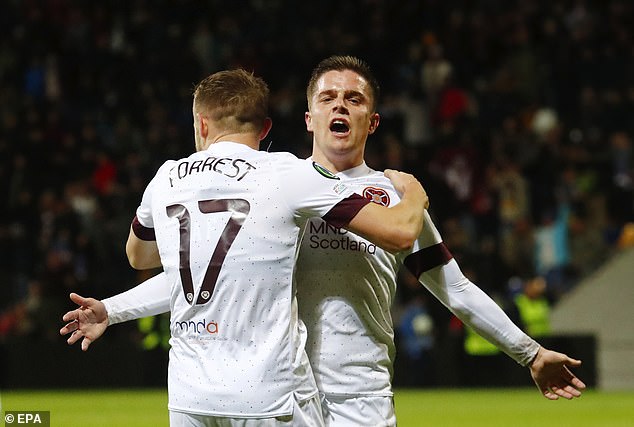 Neilson admitted before kick-off the inclusion of the centre back was a risk. It did not pay off as the 27-year-old could not continue. On came former Dundee United youngster Lewis Neilson to shackle Riga dangerman Andrej Ilic, a physically imposing Serbian frontman with 20 goals to his name already this season. But the 19-year-old would be up to the challenge.

As half time approached, Hearts created their best chance of the game to date. Alex Cochrane ran down the left and cut back for Andy Halliday. The former Rangers midfielder’s shot was on target but Steinbors used his knee to save.

Then Shankland ran onto a deflection off Ginnelly in the box and dinked the ball past Steinbors and past the far post.

But Hearts were getting closer and they were soon gifted a terrific chance to take the lead when Vitalijs Jagondinskis blocked a Halliday cross with his arm.

The Hearts players were screaming for a penalty and referee Stavrev agreed.

Shankland stepped up and with the nervelessness of a bomb disposal expert, he expertly sent the ball into the postage stamp corner of the net. 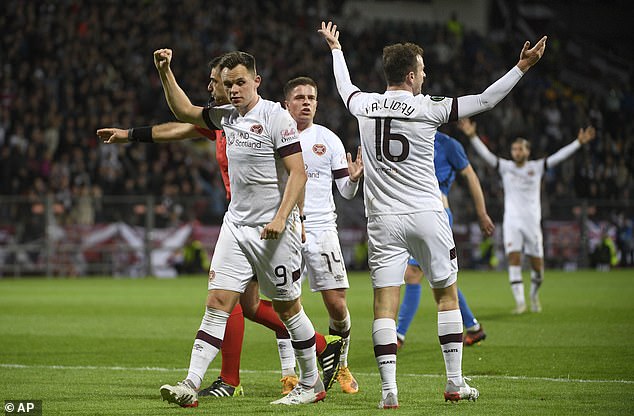 However, as has so often been the case it was Gordon to the rescue before the break amid a chaotic, action-packed end to the first half.

The veteran’s first save was impressive enough, stopping a fierce Tomislav Saric shot on the turn.

But his second stop was even better, somehow preventing Ziga Lipuscek levelling with a thumping close-range diving header.

Ginnelly then had a chance to give Hearts the comfort of a 2-0 lead at the break. Instead of shooting he tried to find Shankland at the back post and the forward was unable to turn the ball home when he should have done better.

As Hearts sat back in the second half they looked nervy at set-pieces against a tall Riga side. But in an attacking sense Barrie McKay was getting on the ball more and what a sight he is in full flow. 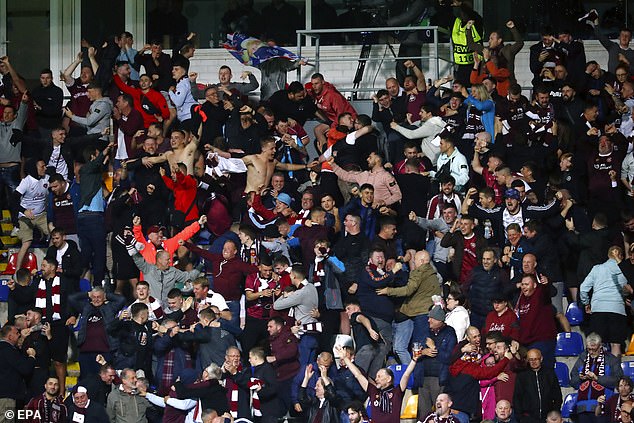 One defence splitting pass saw Shankland just marginally offside but the Hearts striker chipped into the net just in case.

Then Gordon was booked for handling outside his box in the left back area. Apoplectic Riga manager Viktors Morosz wanted a red card but referee Stavrev had got it right in issuing a caution.

Shots by Shankland, Kingsley and Halliday all forced saves from Steinbors before Ilic missed Riga’s best chance to level this enjoyable contest.

Substitute Forrest made Ilic pay with a clinical finish in stoppage time as Hearts got their Europa Conference League campaign up and running. And what an adventure could yet lie in store.