Ronaldinho rolls back the years! Barcelona great proves class is permanent against Real Madrid legends after lofting cheeky chip from distance just over the crossbar… before scoring a penalty in narrow 3-2 defeat in El Clasico with a twist

Ronaldinho proved once again that class is permanent after he delivered a jaw-dropping display in the legends clash between Barcelona and Real Madrid.

The Nou Camp icon featured alongside a host of fellow all-time greats in the entertaining fixture yesterday in Tel Aviv, Israel, and quickly stole the show.

It was Madrid who emerged victorious after clinching a hard-fought 3-2 victory, with Ronaldinho’s goal from the penalty spot ultimately not enough for the Blaugrana.

Scroll down for the highlights 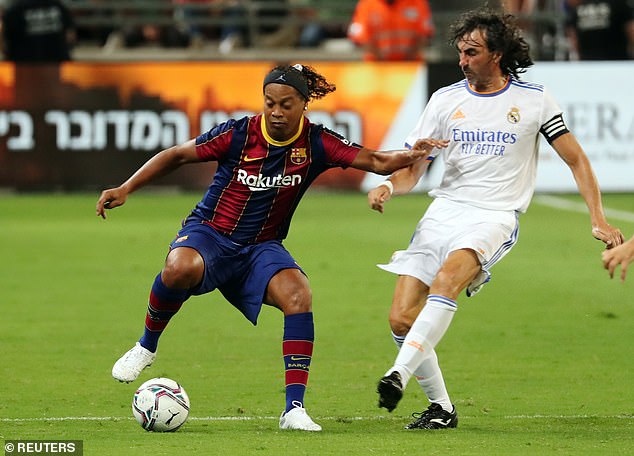 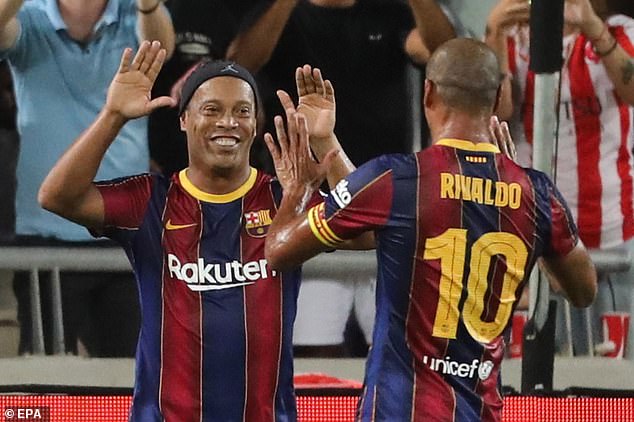 All-time great Ronaldinho dazzled with his performance in the El Clasico tie in Tel Aviv, Israel

Flourishing with the likes of Deco and Rivaldo around him, it didn’t take long for Ronaldinho to step into the spotlight and remind spectators of his superb ability.

With just over six minutes played, the wily playmaker latched onto a loose ball, glanced up, and then attempted to chip Jordi Codina from around the centre circle. 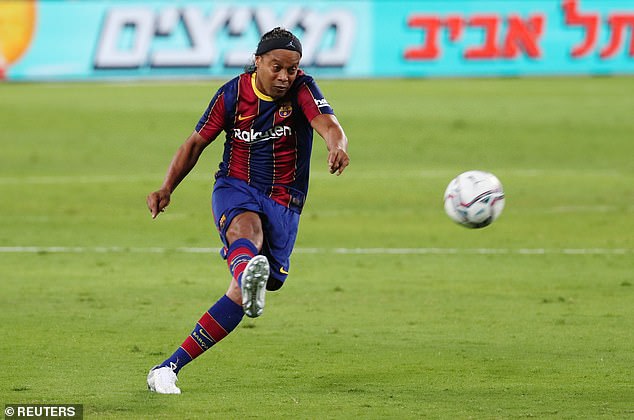 A red-faced Codina was left scurrying back towards his line, but could only watch on as Ronaldinho’s audacious dink flew above his head and kissed the roof of the net.

The attempt set the tone for Ronaldinho’s formidable showing, and he also got the crowd on their feet when neatly teeing up Rivaldo for a host of missed chances.

He would eventually seal a spot on the score sheet, however, after stepping up from 12 yards to blast his spot-kick beyond Codina’s outstretched hand.

Throwing back the years in brilliant fashion, Ronaldinho even celebrated in his trademark style, sticking out a thumb and a little finger with a clenched fist. 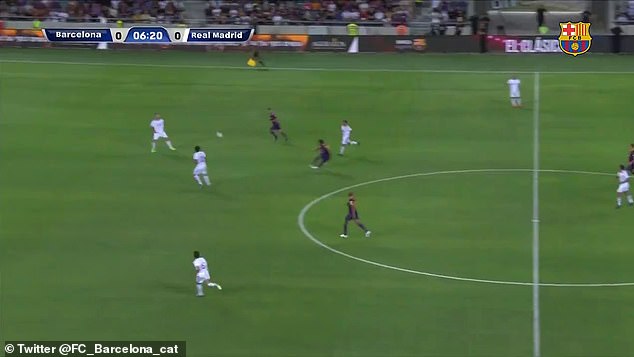 The ball was gifted away to Ronaldinho just inside Madrid’s half, and he lofted his dink forwards 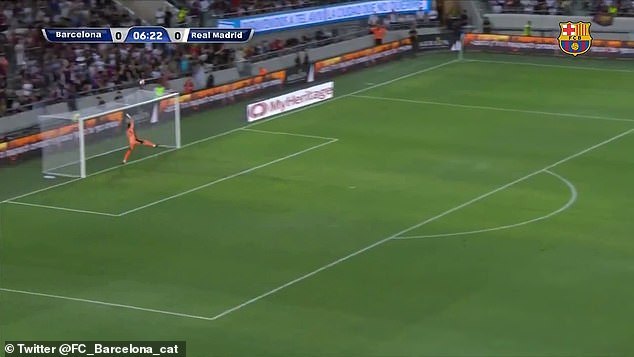 With Jordi Codina racing back to his line, the fine effort landed the wrong side of the crossbar

Madrid mounted a fine comeback, though, with Munitis firing home on the rebound after Jose Amavisca’s effort was distance was kept out.

Munitis then turned to provider to tee up Perez for the second, before Mateu danced his way towards goal to tuck home and level for Barcelona.

But Los Blancos would not be denied the bragging rights, and de la Red carved out space to shoot before finding the back of the net.

Despite the defeat, Ronaldinho would have left the ground feeling ecstatic after being treated to a rousing reception every time he touched the ball. 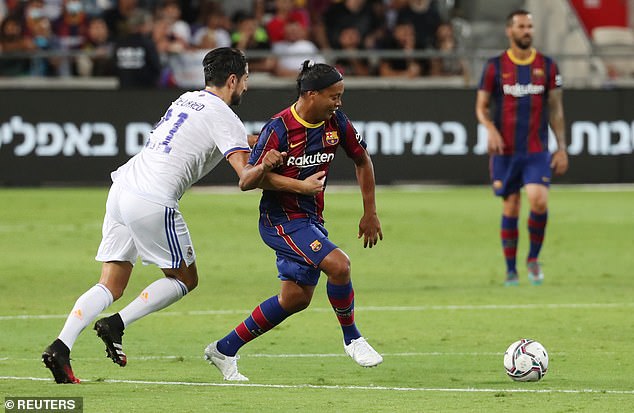 He had left a number of defenders in the dust, just like in the heyday of his illustrious career, and wasn’t afraid to pull out a number of tricks to weave his way up the pitch.

Ronaldinho also clattered an effort off the crossbar, and notably every team-mate had flocked over to congratulate him after his goal from the penalty spot.

During his time with Barcelona, the now 41-year-old lifted the LaLiga trophy twice and clinched the Champions League. He also won the Ballon d’Or in 2005.

Having played 207 times in Catalonia, Ronaldinho affirmed his spot in the pantheon of footballing untouchables after scoring 94 goals and recording 71 assists. 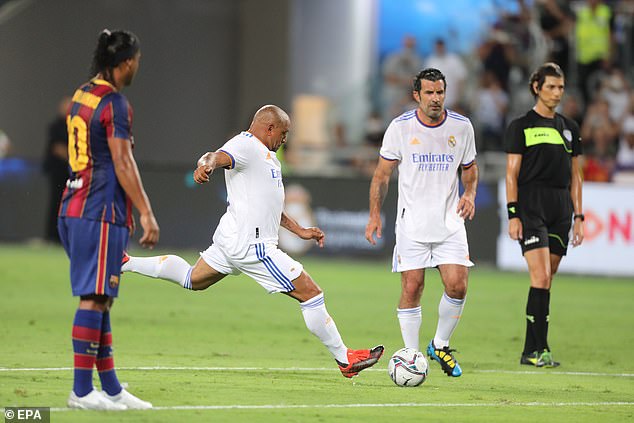 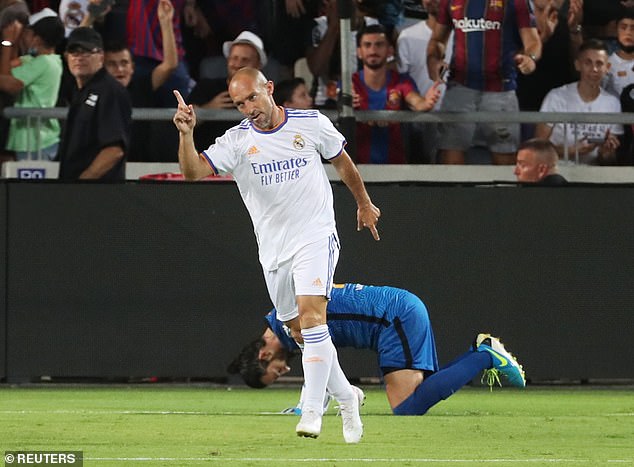 And his time in competitive exhibitions may not be over yet, with this game set to be the first of several involving Barcelona legends around the world.

According to a statement, the matches are ‘designed to help promote the Barca name and values around the world through its former players.’

It goes on to add: ‘The aim is to play games and run parallel events in different places around the world.’

Roma boss Fonseca wants to sign BOTH Smalling and Mkhitaryan