The 2-1 defeat to Serbia in Lisbon meant that Portugal would drop into the play-offs for a chance to reach the World Cup in Qatar next year as their opponents leapfrogged them in the standings.

Ronaldo was visibly distraught after the defeat as Aleksandar Mitrovic's 90th-minute header stole victory for the visiting Serbs, with a point all Portugal needed to qualify.

However, his mother still believes she will see her son play at a fifth World Cup and sent him an inspirational message on social media after the match. 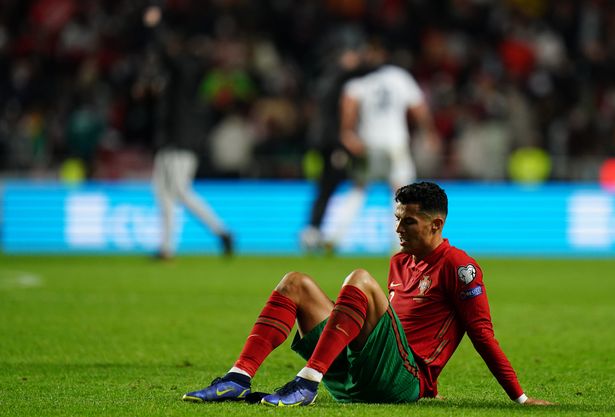 Dolores posted a picture of her son looking grumpy following the defeat to her Instagram account with the caption: "Force to believe always son."

If Portugal come through the play-offs in March successfully then Ronaldo will have the chance to become just the fourth player to appear at five World Cups at the end of 2022.

At 36, many fans believe that the World Cup in Qatar will likely be his last major tournament as he will be 39-years-old by the time the 2024 Euros kick off in Germany.

Will Portugal qualify for the World Cup via the play-offs? Let us know in the comments section below. The Manchester United forward was clearly upset following the defeat and could be seen holding back tears as he was consoled by his teammates at the full-time whistle.

Ronaldo could also be seen storming off the pitch and getting into a tense confrontation with Portugal manager Fernando Santos.

His mum is always one of his biggest supporters, however, and is regularly in attendance at his matches even after suffering a stroke last year.

She was one of the first people to congratulate her son and his girlfriend Georgina Rodriguez after they announced they were expecting twins.

Dolores posted an ultrasound of the twins to her Instagram story and added the applause emoji as she showed her support for the couple.

Xavi wants to return to Barcelona, but not looking to oust Koeman