Scotland celebrate scoring against the Faroes

John McGinn scored twice as Scotland secured the first win of their 2022 World Cup qualifying campaign with a convincing 4-0 victory over the Faroe Islands.

The Aston Villa midfielder, who scored a crucial late leveller against Austria last week, fired the home side into the lead in the seventh minute at Hampden Park then doubled that up with a header in the 54th minute – his 10th international goal.

Southampton striker Che Adams scored his first Scotland goal in his third appearance on the hour mark before Ryan Fraser added a fourth with a back-post header.

After draws against Austria and Israel in their opening two Group F fixtures, Scotland moved into second place behind flawless Denmark with five points from nine but still have work to do if they are to get to Qatar next year.

However, Steve Clarke will be more than pleased with a dominant performance, notwithstanding the lower quality of opponent.

The Scotland boss, as expected, tweaked his team against a side who had started their campaign with a draw against Moldova and defeat in Austria.

Craig Gordon took over from David Marshall in goal, with Scott McTominay dropping back from midfield to a three-man defence alongside Grant Hanley and Kieran Tierney.

With defenders Jack Hendry and Stephen O’Donnell dropping out, Fraser, who scored the leveller in Israel on Sunday, moved to right wing-back and Kenny McLean came into midfield, with Adams and Lyndon Dykes starting for the first time as an attacking duo.

The home side started with good intent.

The Faroe Islands, who had taken points from Scotland in Euro qualifiers twice before, draws in 1999 and 2002, had former Motherwell stopper Gunnar Nielsen in goal and within a minute he had to make a save from Fraser’s left-footed drive.

Scotland‘s opener came through a well-worked passage of play which led to midfielder Callum McGregor feeding the advanced Tierney on the left-hand side of the penalty area.

The Arsenal defender picked out McGinn with a cut-back and he guided his shot from 16 yards low into the far corner of the net.

The Scots looked confident and purposeful but in the 15th minute Gordon had to fly high to his left to tip over a stinging drive from distance from Brandur Hendriksson.

It was a warning, but Scotland regained the upper hand and in the 24th minute an Andy Robertson free-kick from wide on the left found Adams but his close-range header was gathered by Nielsen.

The Scots continued to probe but the final cross or pass was failing to find its target, as did McTominay’s header from a Fraser free-kick in the 34th minute, with Tierney testing Nielsen with a low drive before the break. 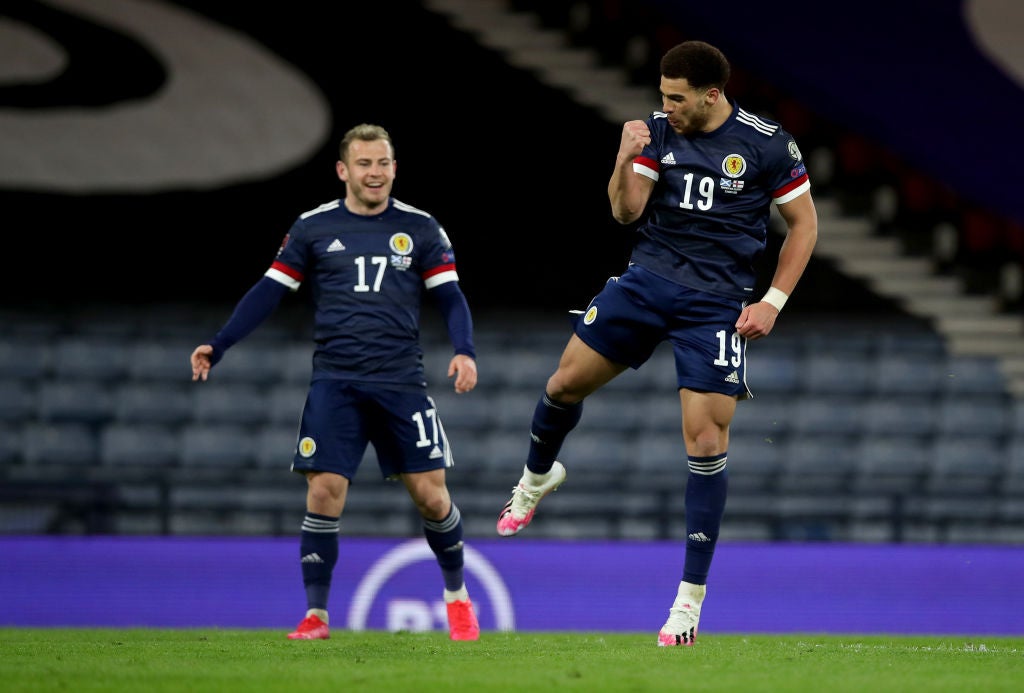 Shortly after the interval, Gordon dropped a cross in his six-yard box but, luckily for the home side, Joan Edmundsson failed to capitalise.

However, the Scots were able to relax a little when Tierney linked up with Robertson down the left before slinging in a cross for McGinn to head in from 10 yards.

The points were then effectively secured when Adams took a pass from Tierney and drilled in a shot from outside the box which left Nielsen flailing.

In the 68th minute, Hibernian striker Kevin Nisbet replaced Dykes to make his international debut before Fraser popped up at the back post to head in a Robertson cross.

A raft of replacements on both sides lent a disjointed look to the latter stages – Gordon made a fine save from substitute Patrik Johannsen’s header in the 84th minute – but all in all, it was a good night’s work for Clarke’s side, albeit tougher tests lie ahead.